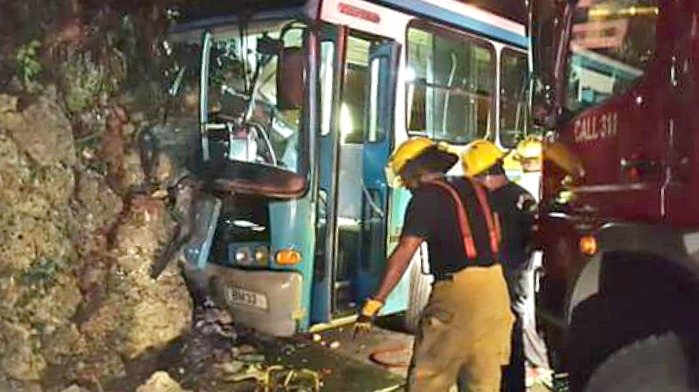 Emergency responders at the scene of the accident last night.

Ten people were injured after the Transport Board bus they were travelling in crashed into cut rock along Parris Hill, St. Joseph last night around 10:15 p.m.

According to police, the driver, Anthony McClean, 45 years of Marley Vale St. Philip, encountered wet road conditions and began to skid. He lost control of the bus and ran into the cut rock.

He had to be freed from the bus by the Jaws of Life and was taken to hospital where he is being treated for a laceration to his leg.

A 36-year-old woman and her one-year-old son were also transported to the QEH by ambulance for medical attention, where they were treated and discharged.

Seven other passengers also complained of pain to the head, neck, back, and hands and opted to seek private medical attention.

In all, there were 11 passengers on board.

Two fire tenders and eight fire officers under the command of Divisional Officer Henderson Patrick responded to the scene.