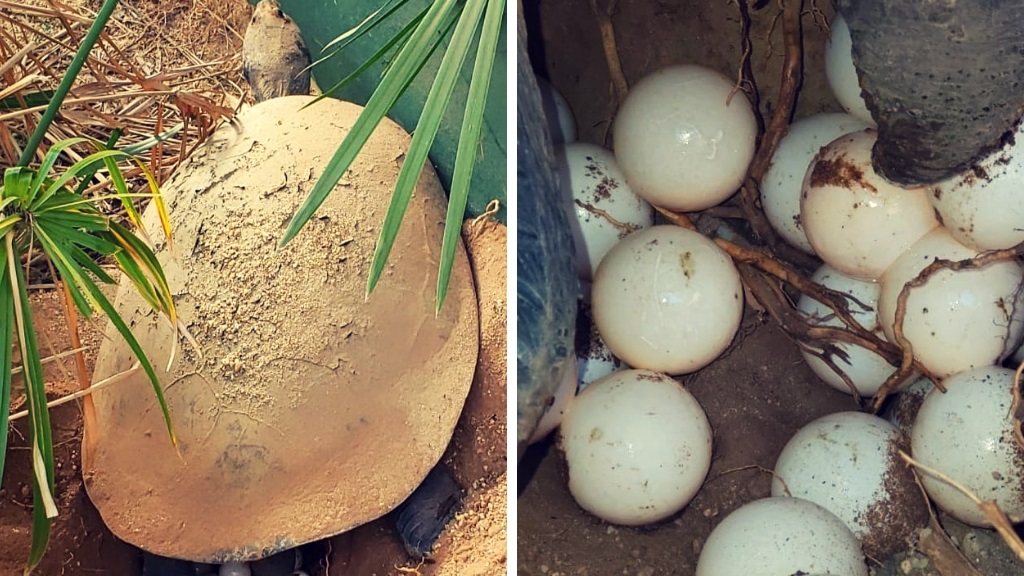 With the Emperor Valley Zoo in Port of Spain, Trinidad, emptied of people due to the novel coronavirus disease (COVID-19), a 100-year-old South American river turtle has laid eggs in her enclosure.

Zoological officer Sharlene Khan shared photos to Facebook showing the South American river turtle which nested in her enclosure due to the quiet atmosphere of the Zoo, which is currently closed to the public.

Khan said they believe this allowed the animal to lay her eggs on land in her enclosure, as there is now less foot traffic.

"Zoo staff believes the Zoo's oldest animal - an over 100-year-old South American river turtle - have nested in her enclosure due to the now more peaceful and quiet environment at the Emperor Valley Zoo."

"With the Zoo being currently closed to the public, this means less vehicular noise from the nearby roadways, less foot traffic and less everyday sounds from people. Zoo staff now believes the turtle felt comfortable and secure at this time to come out of her pond and start laying eggs."

Khan said within the last year, the turtle laid eggs twice, however, these eggs remained unviable as she laid in them in water without coming onto land.

"It is known that the South American river turtle species is highly aquatic and only venture out of water to lay eggs on land. This now quiet atmosphere at the Zoo must have been an ideal condition for her to choose to nest now on land as they naturally do in the wild."

Khan said two weeks before laying her eggs, Zoo staff noticed the turtle exiting her pond and making her way to a sandy bank.

She said on March 3 at 5.30 am, the turtle was seen digging in the bank with her flippers and then laying eggs.

The process lasted about three hours.

She said Zoo staff continues to monitor both turtle and nest site.

Khan said the South American river turtle is one of the largest freshwater turtle species in the world and has had a place at the Zoo since it first opened its doors to the public in 1952.