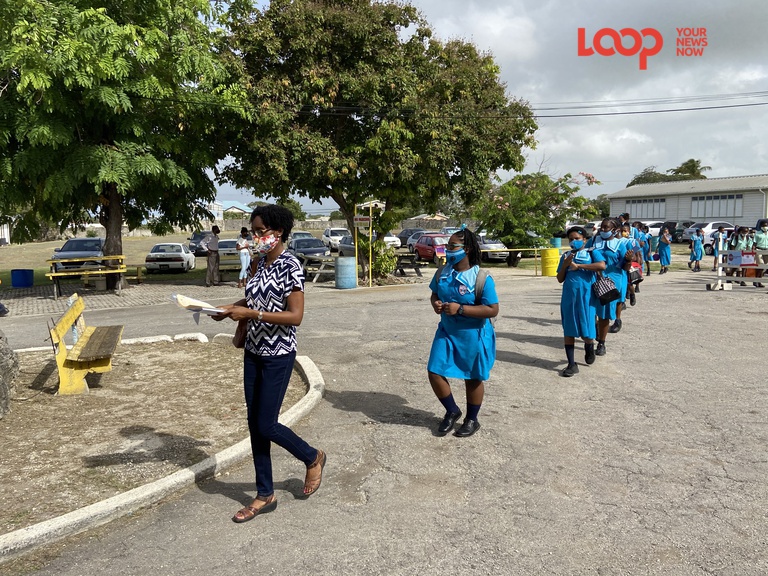 Students set to take the Common Entrance examination make their way to their examination rooms at the Christ Church Foundation School.

At 1.58 this afternoon, parents stood with bated breath and excitement as their children rushed out of Christ Church Foundation Secondary School (CCFSS) after completing the Barbados Secondary School Entrance Examination.

Commonly known as the 11-Plus or Common Entrance, the examination marks a child's first momentous step as a pre-teen and academic. One hundred and seventy-nine students (179) collectively from Cane Vale Prep, Jones Private School, St Christopher Primary, Christ Church Girls Primary, and Milton Lynch Primary sat the exam at the Foundation School.

As she rushed into her mother's arms, Rashae' Marshall told Loop News that she was confident in her performance in today's examination and was hoping to attend the Christ Church Foundation in September.

"The grammar and the composition were easy but the maths was fair. I got through though," said the 11-year-old.

Her mother, Sacha Marshall shared that she told her daughter before the exam to "just do your best".

"It doesn’t matter what school you go to, you can excel at any school," she added.

Milton Lynch Primary student, Ashem Barnett, revealed he was initially concerned about the maths papers but his concerns were put to bed during the examination.

The witty 11-year-old said that he was not affected by the changes to the school semester but that it was "a lot different" as students were required to maintain a distance of three feet and sanitise their hands before entering and exiting rooms.

"I saw some questions I knew and some questions that were different but had the same concepts that I learned. The work that was in the exam I did at school and I studied at home," said the shy student, who is aiming for The St Michael School.

This year, the format was different for the primary-level students due to the COVID-19 pandemic. Students were sanitised and their temperatures checked upon entering the institution. Only 16 students were allowed in a room and distanced by three feet. All students were required to wear face masks. Sanitisation stations were placed at different points across the school.

"The classrooms would have been sanitised yesterday and today before the students came in. That is the major change this year as well," he disclosed.