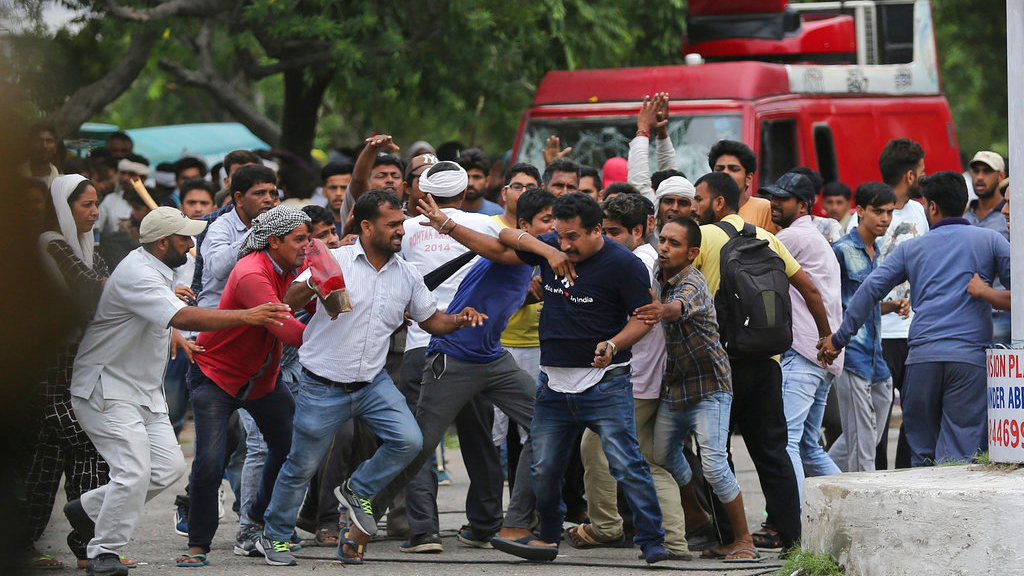 Mobs rampaged across a north Indian town on Friday, leaving 13 people dead and buildings in flames, after a court declared a quasi-religious sect leader guilty of raping two of his followers, authorities said.

Police used water cannon in an attempt to disperse the crowd in the town of Panchkula, and a spokesman for the guru's sect urged his supporters to remain calm.

The violence so far had left 13 dead, including some with bullet wounds, and more than 100 injured, according to Dr. V.K. Bansal, chief medical officer at the state-run Panchkula Civil Hospital.

More than 15,000 paramilitary troops and police officers, some on horseback, were deployed in Panchkula.

Mobs set fire to government buildings, and attacked police and TV journalists, smashing the windshields of media vans and breaking broadcast equipment. Police initially used tear gas and water cannons, and then fired bullets in the air in an attempt to control the surging mobs as they vandalized bus stations and government vehicles.

A curfew was imposed in at least four districts of Punjab, said Amrinder Singh, the state chief minister.

The special court had announced the guilty verdict Friday after hearing closing arguments in the 15-year-old case against the guru, who calls himself Saint Dr. Gurmeet Ram Rahim Singh Ji Insaan.

Ram Rahim Singh — who had denied the charges of raping the two women at his ashram in 2002 — was taken into custody and would be housed in a jailhouse in the nearby town of Rohtak in Haryana state until his August 28 sentencing hearing, prosecutor H.P.S. Verma said.

Panchkula administrators had feared that a guilty verdict would trigger violence among the tens of thousands of followers who had camped overnight awaiting the verdict.

Violence also broke out in several places across the neighboring states of Haryana and Punjab, police said. Railway stations in the towns of Malout and Balluana were ablaze, and two coaches of an empty train parked in New Delhi's Anand Vihar station were also set on fire.

A spokesman for the Dera Sacha Sauda appealed for calm while the sect explored legal ways to pursue justice for the guru.

"I just want to request everyone to maintain peace at the moment," said Dilawar Insan. "We will explore what legal options are available to us."

Police were also on alert across the Indian capital, and had contained several small outbreaks of violence in New Delhi, according to a police control room officer who spoke condition of anonymity because he was not authorized to speak with media.

Angry mobs also attacked police in the town of Sirsa, where the guru's ashram is located, according to a local police control room.

The guru's Dera Sacha Sauda sect claims to have some 50 million followers and campaigns for vegetarianism and against drug addiction. It has also taken up social causes such as organizing the weddings of poor couples.

Such sects have huge followings in India. It's not unusual for leaders to have small, heavily armed private militias protecting them.

When the guru left his ashram in Sirsa early Friday for the hearing, he was accompanied by a convoy of more than 180 vehicles, said the Punjab chief minister, Singh.

Police had erected heavy metal barricades topped with barbed wire along main roads in the town, a quiet residential suburb of Chandigarh, which is the common capital of Haryana and Punjab states.

"Why did the Haryana administration allow so many people to gather in Panchkula?" said Singh, the state's highest elected official and a member of the nation's main opposition Congress Party, in an apparent dig against the state's governing Bharatiya Janata Party led by Prime Minister Narendra Modi. "It is impossible to control such a large hysterical mob."

Before the verdict was read, Haryana police official B.S. Sandhu had said that army soldiers would march through the streets, but it was not immediately clear if they would carry out that plan.

Authorities ordered Internet and cellphone services shut down across both Haryana and Punjab as a security precaution.

Train services were canceled through the area, leading to railway delays across north India. Schools and colleges were closed.

The case was tried in a special court run by India's top agency, the Central Bureau of Investigation.

Such cases have prompted public violence in the past.

Clashes in 2007 between the Dera Sacha Sauda followers and members of the Sikh faith left at least three people dead in north India.

In 2014, six people were killed when followers of another religious leader, guru Rampal, fought pitched battles with police who were attempting to arrest him for contempt of court after he repeatedly failed to appear in court in connection with a murder trial.

In a televised appeal on Thursday, Ram Rahim Singh had asked his supporters not to resort to violence, but some said they would not tolerate a verdict that went against their leader.

"I consider guru-ji to be only next to God," farmer Malkit Singh said as he squatted on the ground in a Panchkula park, saying Ram Rahim Singh had cured him of a decadelong addiction to drugs.

"There is a God above," he said. "Our guru-ji follows the path of truth."