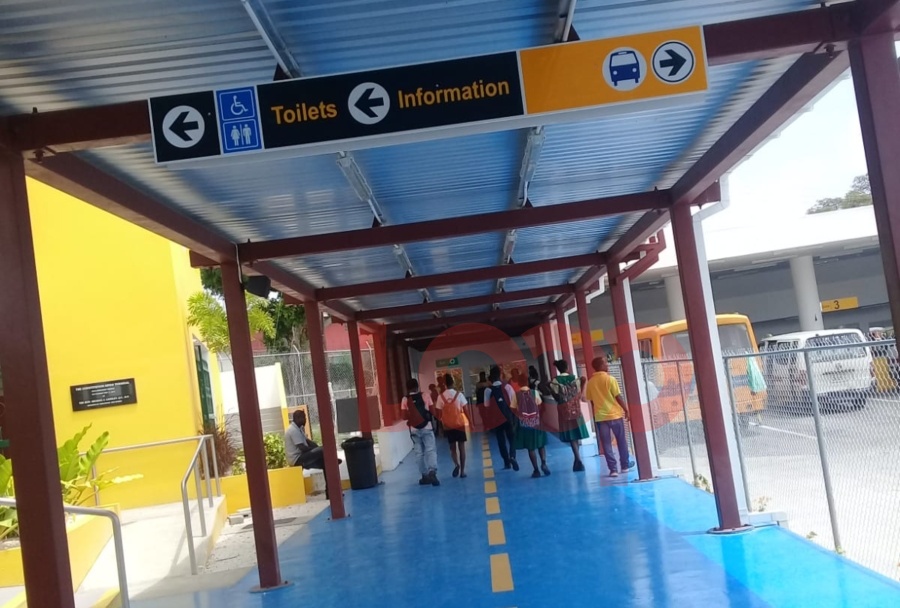 The new Constitution River Terminal may be a thing of beauty along the River in Bridgetown and it may bring some much-needed order to business and activity at that transportation hub, but it has also brought some headaches and back pains.

The shelter is welcomed and with the heat these days it's most delightful when combined with the available seating, but the terminal design has some flaws that have some commuters wanting a better mix of the old and the new.

Here are 13 annoyances that have been inherited with the new terminal.

1. There is one main entrance with three turnstiles. It's no longer land in de Van Stand and walk straight into de awaiting van. Forget "Sweet girl you gine home? Come mums I got a seat here for you! Pine, Wildey, Collymore Rock! Silver Hill, Gall Hill, Newton! Maxwell, Hastings, Oistins, Airport! Come, come, I got room fuh you! You want this? She ain't gine up wid you, I bring she down dis marning and she gine back up wid me!" A huge piece of the Bajan Van Stand culture has died.

2. Terminal gate numbers and route numbers do not match. Don't hold your breath and expect to find Silver Hil at gate 10 or Fordes Road at Gate 8.

3. It's a long walk to the minibuses and route taxis now. You may end up buying snacks, drink or some BBQ wings just because you have to walk by allll the snackettes now.

4. The maze of handrails by each gate reminds commuters of the Fairchild Street Bus Terminal - a place where many van commuters avoid like the plague. Now the Ministry has brought the hated style to the beloved River stand. That's how some feel.

5. No more snocones brought to your bus window. THIS WAS A HUGE PART OF THE RIVER TERMINAL CULTURE. R.I.P. The sno cone men and woman are now far from the vans on the perimeter. *sigh*

6. No more running to buy a snack quick, quick, quick before the van moves off. Why? See number 3 above!

7. There's a drop-off point now. So even Route 6 commuters have to disembark and walk the long walk to get in another Route 6, because the one they came in will have to go to the back of the line unless the Route 6 line is free. *The Ministry dropped the ball on this one because in the Route taxi world, the Route 6 is equivalent to the Transport Board City Circle and those elderly City Circle commuters do not disembark in town with everyone else. They stay seated when the bus pulls into the terminal and up to the gate!*

8. Gone are the days of choosing to fill up a particular, special van first. Top of the line fills first now. No ifs, ands, buts nor maybes!

9. No more dashing to the bathroom. The facilities may have been upgraded but they're a good distance from the vans too. It's a pregnant commuter's nightmare. She'd have to rock like a duck out the van, back through the maze of handrails and up to the top of the terminal, then up the stairs and into the Transport Authority building to find the restrooms. Pray God that the pregnant ladies make it in time each and every time. Amen. 'Cause that could be plenty embarrassing.

10. Gate 8 has three of the most wanted vans so the line is always crowded. Ask Sam Lord's Castle and Bayfield people about the madness. Oh dear, we forgot the third district.

11. There need to be some directional arrows for first-time users. Finding the correct gate is not the easiest necessarily and the announcer isn't speaking every minute. Oh yeah! There is an announcer now.

12. Bye bye to the luxury of having the pushout boy push the groceries all the way to the van and helping you along with the conductor to pack the shopping bags in the van.

13. If you used to wait at the last or second last bus stops on the outskirts of town for the van going into the terminal to secure a seat, like N'Sync 'Baby bye bye bye bye bye bye'. Those days are g-o-n-e...GONE!

The new terminal may have its wins. but it has some major setbacks too.

Police cracking down on illegal vending in Van Stand