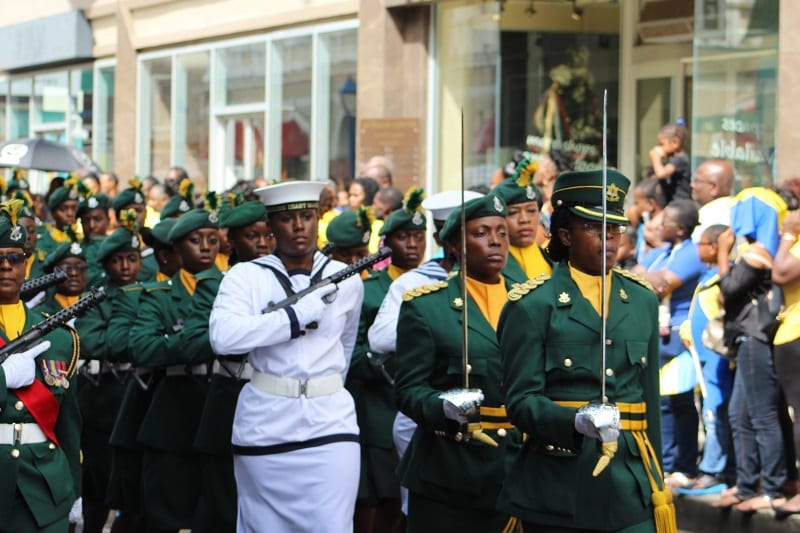 Approximately 1,500 persons are expected to participate in this year’s ‘We Barbados’ procession through Bridgetown on Independence Day, Saturday, November 30.

The day's activities will kick off with the parade representing armed and unarmed detachments assembled at Kensington Oval from 7:20 a.m.

Governor General Dame Sandra Mason will inspect the detachments, which will include the Mounted Troop of the Royal Barbados Police Force (RBPF), the Barbados Defence Force (BDF), the Barbados Cadet Corps, and the Bands of the BDF and RBPF.

This year’s parade, which will be under the direction of Commanding Officer of the Barbados Regiment, Lt. Colonel Carlos Lovell, will feature a display by the Barbados Defence Force in honour of its 40th anniversary.

The ceremony will also include an address by Prime Minister Mia Amor Mottley; the investiture of the recipients of National Honours and Awards; and the presentation of leadership badges to the Head Boys and Head Girls from the primary and secondary schools in Barbados.

Following the Ceremonial Independence Parade at Kensington Oval, the armed and unarmed detachments will join a procession which will include the head boys and girls of primary and secondary schools, who would have received leadership badges during the parade.

There will be music trucks along with a number of floats depicting the theme: United against NCDs.

Two stages will be set up in Bridgetown –  next to Chefette in Upper Broad Street and opposite CS Pharmacy in Lower Broad Street – and performances will run from 8:30 to 11.00 a.m.

A salute will be accorded to Prime Minister Mia Amor Mottley in front of the main entrance of Parliament, following which the armed detachments will continue across the Charles Duncan O’Neal Bridge; proceed along Probyn Street; turn right on to Lower Bay Street and then right on to Fairchild Street for dismissal.

The unarmed detachments will also pay the appropriate compliments to the Prime Minister and turn right on to Charles Duncan O’Neal Bridge for dismissal in front of the Barbados Fire Service Headquarters on Probyn Street.

The We Barbados cultural activity will dismiss at Queen’s Park.