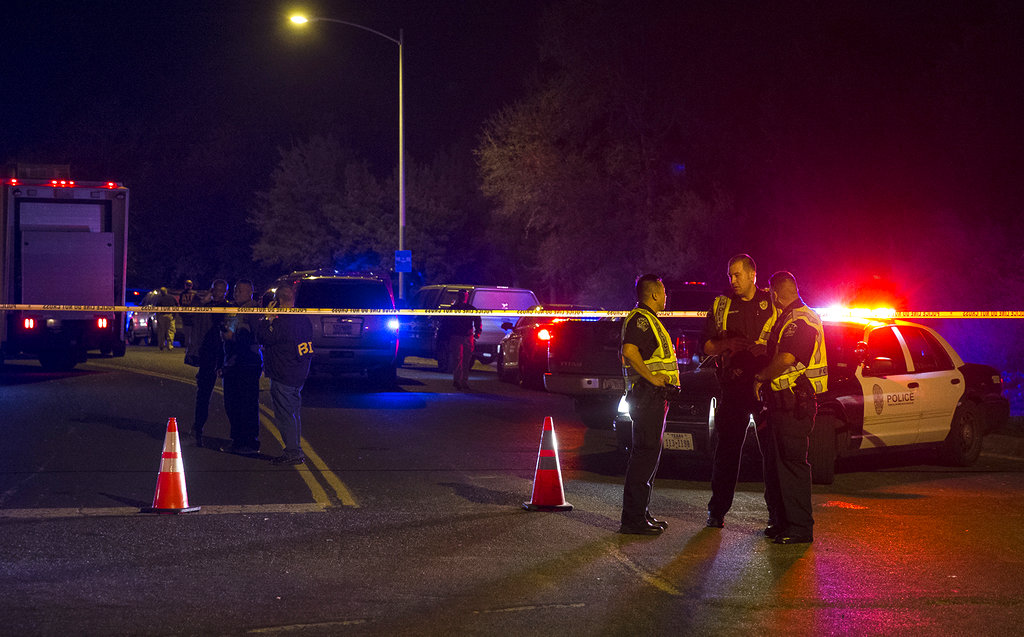 Authorities work the scene of an explosion in Austin, Texas. (Nick Wagner/Austin American-Statesman via AP)

Another explosion tore through Texas' capital city and injured two people, leading police to warn nearby residents to remain indoors overnight as investigators try to determine if it is linked to three package bombings in Austin earlier this month.

The latest blast occurred around 8:30 p.m. Sunday in a southwestern Austin residential neighbourhood known as Travis Country, which is far from the sites of the three earlier bombings, which happened in residential neighbourhoods in east Austin. Though investigators wouldn't immediately confirm what caused the blast, Austin's police chief, Brian Manley, said it was caused by "a device" and again warned the public not to touch any unexpected packages left at their homes.

"What we have right now is a scene where it is obvious that an explosion has taken place," Manley said at a hastily organized news conference near the site of the latest blast.

Responding to reports that the latest explosion may have been detonated by a tripwire, Manley said it was possible that it was "activated by someone either handling, kicking or coming into contact with a tripwire that activated the device."

He urged people within half a mile to stay in their homes and said authorities would keep the surrounding area blocked off at least until daybreak Monday, "given the darkness and size of the area that we want to go in and check."

"We want to put out the message that we've been putting out and that is, not only do not touch any packages or anything that looks like a package, do not even go near it at this time," Manley said. Because "we have not had an opportunity to look at this blast site to really determine what has happened."

Manley also said authorities were still working to "clear" a suspicious backpack found in the area that was part of a separate report.

"It is important right now for anyone in the neighbourhood behind us to remain inside and give us time to work through this," he said, adding that any witnesses should call 911 and report what they saw.

Two men in their 20s were hurt in the latest blast. Police said they were hospitalized with injuries that weren't life-threatening. It was the fourth explosion to rock Austin in less than three weeks.

The first was a package bomb that exploded at a northeast Austin home on March 2, killing a 39-year-old man. Two more package bombs then exploded farther south on March 12, killing a 17-year-old, wounding his mother and injuring a 75-year-old woman.

Police said all three of those were likely related and involved packages that had not been mailed or delivered by private carrier but left overnight on doorsteps. Manley originally suggested they could have been hate crimes since all the victims were black or Hispanic, but now says that investigators aren't ruling out any possible motive.

Manley last week urged residents receiving unexpected packages to call authorities without touching or opening them, and police responded to hundreds of calls about suspicious packages but didn't find anything dangerous.

On Sunday, police blocked entrances to the neighbourhood where the latest blast occurred and put up yellow tape about half a mile from the home where it happened.

Despite the order for those living nearby to stay in their homes, neighbours milled around just outside the tape. Some reported hearing loud booms but couldn't provide many details. FBI agents arrived to conduct interviews.

The latest explosion came hours after authorities raised the reward by $50,000 for information leading to the arrest of whoever is responsible for the first three explosions. It now totals $115,000.

Sunday is the final day of the South By Southwest music festival, which draws hundreds of thousands to Austin every March. It is also the end of spring break for many area school districts, meaning families who were out of town in recent days are returning to a city increasingly on edge.

The explosions occurred far from the main South By Southwest activities, though a downtown concert by hip-hop band The Roots was cancelled Saturday night after a bomb threat. Authorities later arrested a 26-year-old man, and the incident did not appear to be related to any previous explosions.