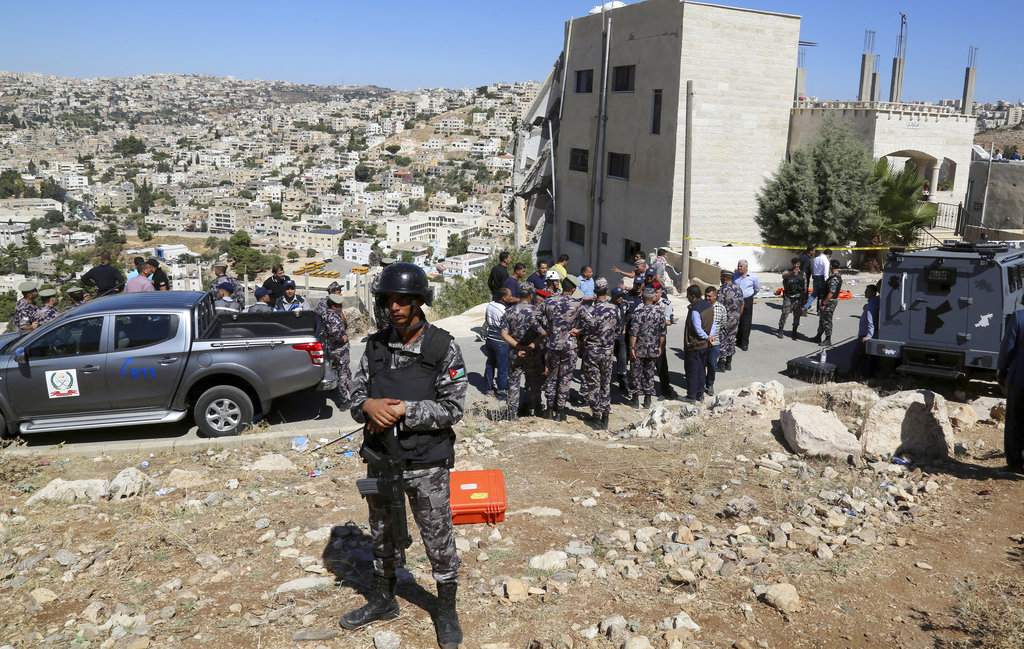 Jordanian forces secure the area Sunday, Aug. 12, 2018, after the side of a building collapsed when assailants opened fire and set off explosions late Saturday that killed four members of the security forces trying to storm the suspected militant hideout in Salt, west of the capital of Amman. Jordanian search teams have pulled the bodies of three suspected militants from the rubble of their hideout, a government official said Sunday. (AP Photo/Raad Adayleh)

Jordanian search teams pulled the bodies of three suspected militants from the rubble of their hideout, a government official said Sunday, hours after assailants opened fire and set off explosions that killed four members of the security forces trying to storm the building.

The clash late on Saturday was among the deadliest between suspected militants and Jordanian security forces in recent years. It raised new concerns about attempts by domestic and foreign militants to carry out attacks and destabilize the pro-Western kingdom.

Jordan has played a key role in an international military coalition that helped push back the extremist group Islamic State in neighboring Syria and Iraq.

The chain of events in Jordan began Friday when assailants detonated a home-made bomb under a police car guarding a music festival in the predominantly Christian town of Fuheis, west of the capital of Amman.

Jordanian authorities did not say what motivated the Fuheis attackers, and there was no claim of responsibility.

Security forces chasing the suspects zeroed in on a multi-story building in the town of Salt, near Fuheis, and attempted to storm it late Saturday. The suspects holed up inside opened fire and set off powerful explosions, officials said. A wing of the building collapsed.

In initial statements late Saturday, government spokeswoman Jumana Ghuneimat said three members of the security forces were killed. She said Sunday that a fourth officer had died and that the bodies of three suspects were pulled from the rubble. Five suspects are in custody.

The Hala Akhbar news website linked to Jordan's military said the suspects are Jordanians and that the cell had planned to attack security installations and other sensitive targets. The site said the suspects had been armed with explosives, grenades and weapons.

Jordan has been a target for attacks by Islamic State in recent years.

In June 2016, a cross-border car bombing launched from Syria killed seven Jordanian border guards. In December 2016, a shootout at a Crusader castle in the southern town of Karak left 14 people dead, including seven members of the security forces, four militants and three civilians.

Jordan is considered to an important security ally, particularly by the United States and Israel which view any signs of unrest there with concern.

The kingdom has cracked down on suspected militants in recent years, imposing prison terms of several years for suspected sympathizers, including those expressing support for militant ideology on social media.

At the same time, hopelessness and alienation among some of the kingdom's young people, driven by high youth unemployment, have provided fertile ground for recruitment by militant groups.