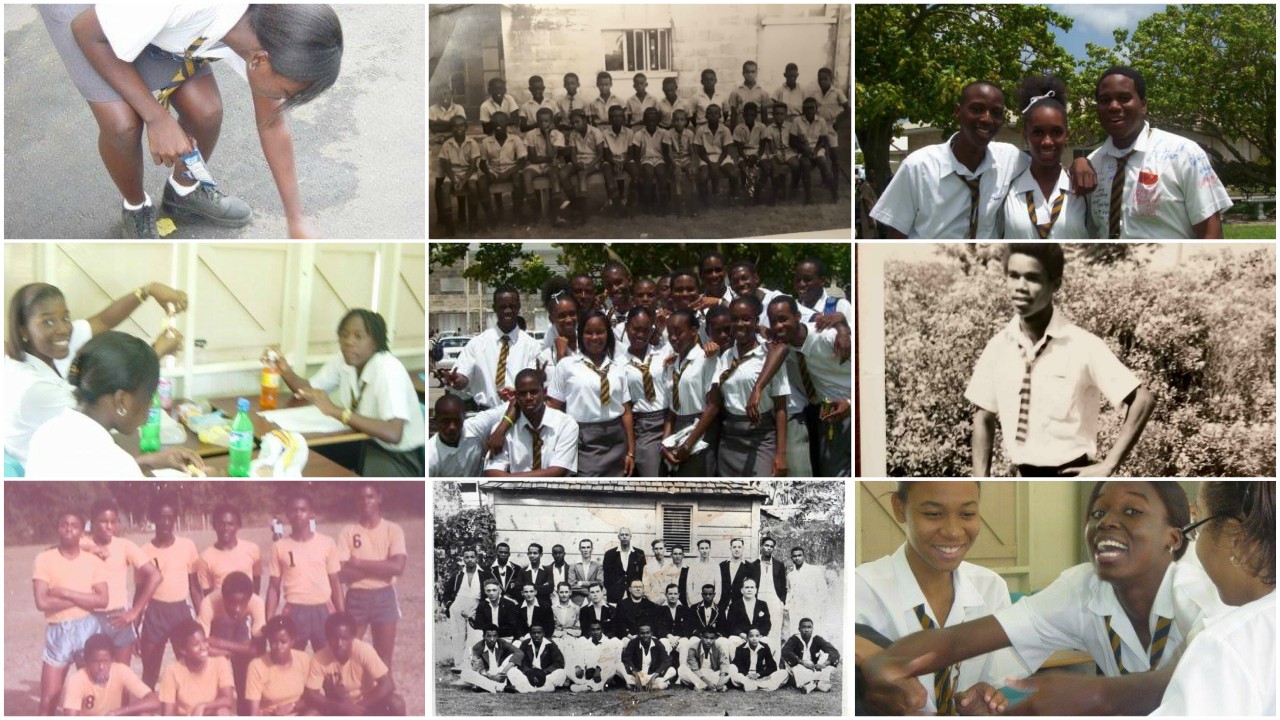 Photos submitted from throughout the years.

It’s Combermere Week and the Cawmerians who have left those hallowed halls of the University of Waterford may be missing the reminiscing all week during full assembly.

With that said, Loop took to social media and the streets to gather some of the most memorable people, moments and stories from people who attended The Combermere School throughout the years.

As persons attended during different eras the teachers will differ in the various positions, so you will see numerous principals, or vendors etcetera in this one article from the school that sprinkles fairy dust on its new entrants annually.

1. Nicknames were not chosen, they were assigned and stuck for life.

b) Ms. Walters for English was Ms Muppet

g) A Maths teacher was Chuck-a-boom

h) A Spanish teacher was Bomb

2. Combermerians were the most innovative bunch after drums were banned from interschool sports. As a substitute they used biscuit tins and cans. This change gave birth to the chants "Dumplings in my soup" and "Patnell bread and two". Patnell being a very supportive mother of a star Combermerian athlete and a strong supporter of the Combermere athletics team.

3. The Breeze Way – “Liming in the Breeze Way every down-time we got.  That was the place to link up with all friends," It used to be a no-khaki zone but… Children got rights and thing now. Oh, a bit of dirt went down there too.

4. When Cadets gine on Drax Square was forbidden.

5. You don’t know silence until Principal Vere Parris raise he hand during assembly and all of a sudden you could hear what bus passing Tyrol Cot.

6. Elaine the food lady who usta sell at the back gate was an institution. You could go to Elaine with a $5 and be satisfied.

8. Going to the back gate to purchase something from Lotus…nothing suspicious.

9. Rita was the snacks lady and she could discipline you as if she were the principal.

10. Cecile by the back gat - She used to sell chips and snacks, but people loved her because she had fancy colored ketchup (purple/green, etc), so if you got her chips, anyone would know. They were trademarks

11. Mini-Crop Over: The energy, electricity and pride in the air when marching with the school band from Combermere to the National Stadium for interschool sports. All eyes were on us and you could hear from the stands "Cawmere coming!" Only a Combermerian knows what that feels like. We brought the vibes to the meet with a mini-jump from school to the stadium, after we had a lil jump up pon de hard court. Oh, and after school sports or interschool sports we had another jam on the hard court. By the way, there was always a jam on the school's basketball court after Interschool Sports, win or lose.  The Hardcourt Jam was the real reason to attend Sports.

12. One must always be prepared for a pop-up, impromptu ‘Live’ session. Stay ready to spit bars. If not, when ya hear a random body holla ‘LIVE’, runnnnn.

16. Only Cawmerians know bout de hole in de gate by de Plus sign

18. Ya knew to clear de place when ya hear "Beast!!!" "Beast Man" aka Mr. Gittens was the only teacher that could have the hallways empty on a whisper of his name.

19. You only sang the last line of the school hymn ‘To be a pilgrim’ and you sang it LOUDLY! And there is always mumbling during the second verse of the school song.

20. Mr. Barrett, the Vice Principal and Head of the Chemistry Department locked himself inside the car and asked the students to open the car door for him. To this day, no one knows how. He also got soaked with a garbage bag full of water.  He also reported his car stolen a day to the police and then remembered he parked it out by the library that day.

21. Mr. Lovell, the Maths teacher, locked himself out of his own car and walked home.

23. Mr. Small saw The Nation Fun walk as a competition and not just a fun walk.

24. A whole class fighting to get 1% in Physics with Ms. Bradshaw

25. Reading imaginary essays in Mr. King's class. He grading and never realising nothing was written.

26. Everyone remembers Ms. Meek, who used to smoke a cigarette and drink a coke in every break, gazing out of the staff window like she was on a hotel balcony, but she was an excellent Math teacher, the best.

27. Contrarily, Ms. Marshall aka The Bulldog was the Lit teacher with a bad attitude. She would yell, turn red, and get totally upset. “She tore my hem right down from my skirt one morning at general assembly. Ugh!” No one could pass Ms. Marshall’s uniform inspections.

28. In first form you learned quickly that you could not walk on the top floor where the seniors were.

31. Mr. Vaughan was reclaiming his time long before we heard of Maxine Waters. He would bring a clock to class and keep you in during lunch if you took any of his teaching time to talk.

32. Chemistry class was a comedy show with mr Barrett

34. Christmas Concert when the teachers sang their version to the 12 Days of Christmas and Ms. Marshall 6:30

35. NEVER GIVE MR.SQUIRES YOUR BOOK RULE NO.1

36. Kicks and Bites on evenings in the front of the school yard

37. When the pizza man from down by the library got run by the police through Cawmere a lunch time.

38. Beating Harrison College 8-2 in football with 10 men in front the entire school

39. A breach of common sense is a breach of the school rules. #Up&On

40. Cawmere Week meant the possibility of missing first period every day, all week as assembly ends around 10:00am.

What are your most fond Cawmere memories?

Dear Politicians, first of all… Bajans got 20 things to say

20 Things Bajan children used to do in summer vacation