Skip to main content
Breaking News |
Weather system becomes bigger and more organised in less than 12 hours
CMO sticks by his decision to give Senator Cummins 'go ahead'
Ghanaian nurse tests positive for malaria, three more to be tested
Man flies in on private jet from Turkey tests positive for COVID-19
COVID-19 patient, 37, dies as Jamaica records 20 cases in 24 hours
Prisoner in Trinidad tests positive for COVID-19
Hundreds of locals turn up to march for #JusticeforDemarco
Coronavirus cases in the Caribbean as of August 10 at 8 am: 116,255
It's the 3rd time a hurricane season has been named 'extremely active'
60 per cent chance of a tropical depression this week 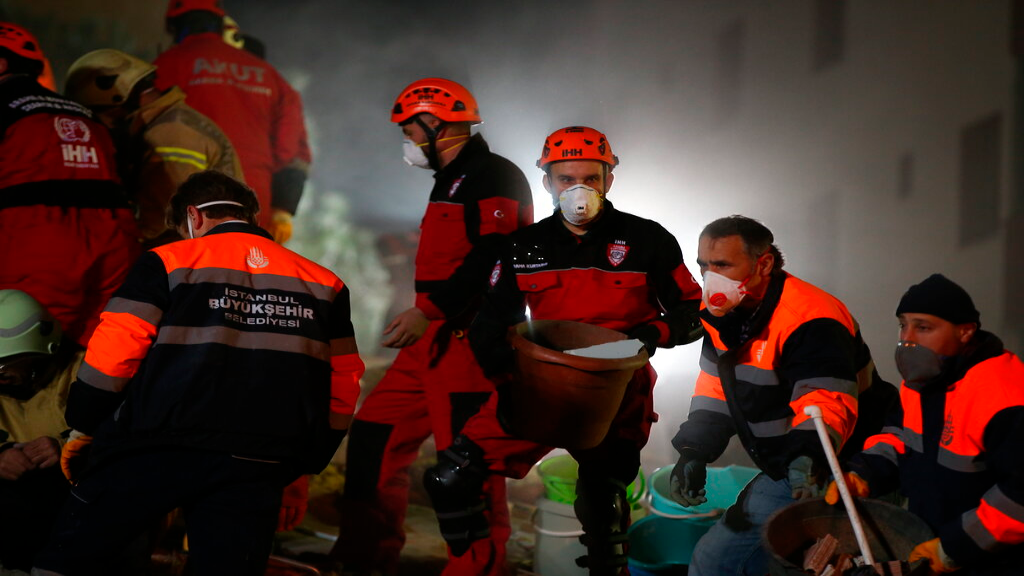 Rescue workers search for survivors at the rubble of an eight-story building which collapsed in Istanbul, late Wednesday, Feb. 6, 2019. (AP Photo/ Emrah Gurel)

A 5-year-old girl was rescued from the rubble of the eight-story apartment building in Istanbul on Thursday, raising the number of survivors of the collapsed structure to 13. At least three people have been found dead.

The girl, Havva Tekgoz, was pulled from the debris about 18 hours after the building in the mostly residential Kartal district, on the Asian side of the city, collapsed. She was carried to a waiting ambulance on a stretcher with her neck in a brace, as one person in a crowd of onlookers chanted "God is great!"

Authorities haven't disclosed how many people remain unaccounted for. The building had 14 apartments with 43 people registered as residents.

Murat Kurum, the environment and urbanization minister, told reporters at the scene that some apartments had guests at the time of the collapse, without providing details.

Kurum said the emergency teams are still "receiving sounds" suggesting signs of life from the under the rubble.

Istanbul Gov. Ali Yerlikaya said earlier that three of the injured were in serious condition.

"All our prayers, all our hearts are with them," Yerlikaya said in reference to people who may still be trapped. "We are continuing with our search and rescue efforts so that we can deliver good news (about survivors)."

The cause of the collapse was under investigation but officials said the top three floors had been illegally built.

Authorities evacuated seven surrounding buildings and one was under serious risk of collapse. The rescue operation was interrupted three times over fears that it might fall and harm rescuers, Yerlikaya said.

Rowley on course for another term as T&T Prime Minister