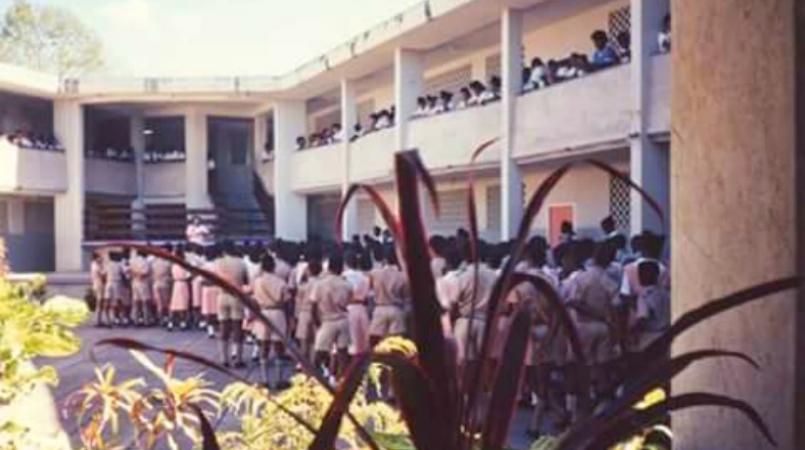 Louis Lynch Secondary School, previously known as Roebuck Secondary, may have been officially closed but the memories gained by students and staff live on.

The girls wore peach and white, and the boys wore that powder blue that was so distinctive as they trekked to Whitepark Road, St. Michael, Monday to Friday.

When Louis Lynch Secondary School closed down in 2005, those who were enrolled were scattered across the island but they too forever remember the school’s motto, “from strength to strength”.

Let’s journey down memory lane with the scholars of the Louis Lynch Secondary School.

1. When Ms. Lashley fell down the stairs that would lead to the canteen. Mrs. Lashley who would always tell us when we misbehaved to pulled our socks up to our throats. Also, when we were in 4th form one morning at full assembly Mrs Lashley took a stroll up the first form block and a guy name Ryan Nurse shouted across the courtyard "Mrs. Lashley look like a big tub of lard" whole school went in an uproar. May she rest in peace.

2. Mr. Callendar was the beater. He was a slim brown skin man who would beat anybody - male or female. You misbehaved around him at your own peril.

3. The French teacher was a bit of a wackadoodle.

4. Going over to the church next door for services or walking to Roebuck street for church services.

5. Standing in the open courtyard for school prayers.

6. The year ‘The Matrix’ came out and we got to set up the TV over by the second form rooms where the Music class used to be, and we got to watch it with our classmates

7. The smell that used to come over from WIBISCO in the early afternoon and make everybody hungry. I remember endless tours there and all the free biscuits.

8. The vegetable garden on the right of the guard hut where we used to do practical Agricultural Science.

9. The trips to that pasture down Baxters Road to practice for sports.

10. The Valentine's Day celebrations when you'd be checking to see who got sent flowers or had a song requested for them. Many hearts used to get broken.

11. P.E. was almost always rounders, except if you went out onto the hard court by the road and saw the volleyball net up, then you knew you were in for a treat. P.E. rounders was for girls, the boys almost always did football while we were playing this.

12. Van rides from the van stand to Bush Hall down to school wid de music pounding. And the time some school-girl mooned the deputy head on a number 6 van, so she called all the students who took the number 6 van to school into the guidance counselor's room for interrogations and she still ain't figure out who it was.

13. Ms. Grimes, a great Maths teacher, you never messed about in her class. She demanded and took respect and she treated you with respect.

14. The English teacher would throw her chalk at you.

15. Mr. and Mrs. Chandler being the after care in addition to selling their snacks, tomato balls, snocones and golden apples. Mr and Mrs. Chandler were our parents away from home. I remember de snowcones wid milk, de golden apples wid salt, de home made popcorn, tamarind balls and de other delicacies from their car then they had to get a van. “Chandler - This woman was great vendor, not just in it for the money. I remember after I told her a friend was diabetic she refused to sell her anything she shouldn't eat.”

16. Asking for a hot cheese and malt from the canteen

17. Ms. Lashley from Home Economics who always emphasized each syllable of your name.

18. Mr. Medford from Metal Work always had a smile on his face and was always ready to inspire

19. Music Teacher, I have forgotten her name, but she would throw chalk or the chalkboard cleaners at you if you weren't paying attention in class

20. Classroom could be like a fish market and someone would say Mr. Brathwaite, Cadogan, Adams or Callender coming, the silence would be deafening.

22. Damien Daisley patrolling the school as a prefect like he was the Principal.

26. Mr. Hope's constant lecturing DURING class and missing lots of time due to said lectures.

27. Legendary stories of Mr. Calendar spankings... oh and being afraid of him.

28. Epic conversations with Mr. Marshall. May he RIP.

29. Music room being the hangout spot for all non-Christian or sick students during full assembly.

31. As for teachers 1s4 and Ms Perkins speech day and Last Man Peak along with Ms Patricks beating an entire class with the exception of 1 person for not remembering what were 'rests' in music .... To this day after all that I can still remember clearly 'Rests are signs of silence, Rests corresponds to notes of value'.

34. Mrs Niles using my T Square to share lashes. Don't say you forget homework because you will do it on the board using only the textbook

35. Sneaking out the back of the school and going to buy Mappies. Going by mappy for breads. De fellows used to go and de mappies and coke and bring back for de girls. In 1984, going through the dippy and meeting Mr. Niles at the other end, oh boy we were in trouble.

37. I remember getting beat by Mrs. Lashley for playing Super Grover in the Home Ec, Room. Boy! I was so scared of Mrs. Lashley. You could imagine my supportive classmates watched me mimic Super Grover, apron around neck as cape, hopping from stool to stool, shouting "It’s a bird, it’s a plane.....and I am cute to" as Mrs. L was entertained from the back. When she said "young lady...." I froze. Mrs. Lashley nicknames were de school bus, tub o lard. When she walks down de corridors she used to clap her hands and say why are we out here standing

38. Mrs. Browne who use to make sure she sounded out every T or D at the end of a word. And she use to say to us, "Can I have your undivided attention?"

39. I remember every last day we use to have some sort of concert...and at Christmas we use to decorate the chalkboard.

40. I remember that Noni tree that we use to call dog dumplings.

41. Ms. Patrick use to have us singing those songs like 'Supercalifragilisticexpealidocious'

42. Mr. Best never got a science class controlled no one ever used to listen to him and his favorite phrase to get our attention was "listen class face front"

43. Who remembers Mrs. Alleyne who used to teach Spanish? Well the boys in our form used to give her bare trouble even calling her "olive" from Popeye. So when they get on bad she would always put them outside or tell dem take the door; this guy Julian Waithe went to the woodwork room came back with hammer and took the form room door off and prop it against the wall. I ain't gotta tell wunna how Mrs. Jemmott tear up our backsides.

45. Anybody remembers a group of about 3 or 4 girls who use to call themselves the 'A Team'?

47. Don't forget Inter-School Sports Day where Edsel Chase was one of the school's star athlete,and who remembers  Sean Dupigny and Troy Sage too. Oh and I remember there was a guy we use to call Cave Man...he was really fast.

48. Remember one of the guys in Mrs. Lashley Home Ec class putting in an entire pot spoon of salt in a meal that was being cooked. Needless to say the entire class got detention cause all we could do was laugh when that dear lady took a taste. I'd never actually seen anyone's face turn literally green before......

49. Mrs Niles using my T Square to share lashes. Don't say you forget homework because you will do it on the board using only the textbook.

50. Ramasese who kicked the football over the fence and broke a car windscreen

One teacher got in on the do and shared:

“All those who objected to my making them play games and taking the many ruffles and excess socks lol but I also recall those who enjoyed learning, those who represented the school in the many debates and other quiz competitions i entered them in. It was my honour and pleasure to teach you all and to give you of myself. I pray god's continued blessings on you and that you continue to be worthy ambassadors of the school you will always call your own.”

To which a student said, “Mam, I think you still have a couple pairs of my socks. Can I have them back please!”

After all the nostalgia, the resounding statement by the scholars and staff who walked those hallowed halls was summed up by one person who said, “The physical place may be in shambles but those lessons will forever live on. They cannot be taken away. From Strength To Strength!”

Louis Lynch Secondary we love you, so onward we will go, as a family we'll spread your honour and let your good name show. – The School Song.

20 reasons why Bajan school days were the best