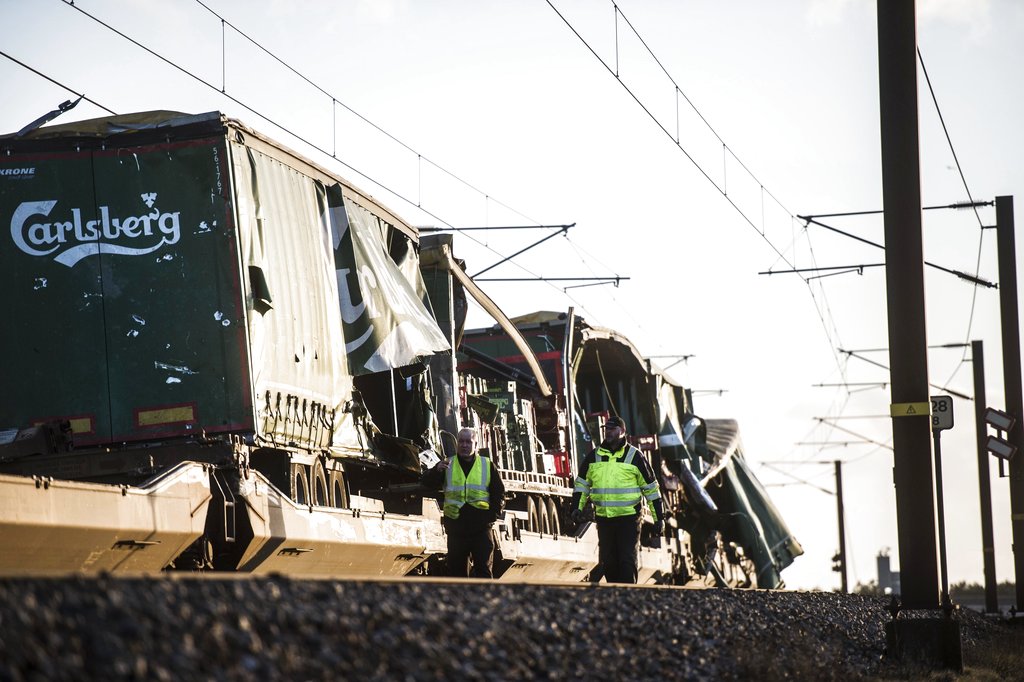 People walk near damaged cargo compartments on a train parked near the Storebaelt bridge, near Nyborg in Denmark, Wednesday, Jan. 2, 2019. (Tim K. Jensen/Ritzau Scanpix via AP)

A Danish passenger train apparently hit falling cargo from a passing freight train Wednesday, an accident that killed six people and injured 16 others as it crossed a bridge linking the country's islands, authorities said.

The accident was the worst in Denmark in more than 30 years.

The rail operator, Danish Railways, told Denmark's TV2 that the victims were passengers on a train going from the city of Odense, on the central Danish island of Funen, to the capital of Copenhagen when the accident took place about 8 a.m.

Authorities said the trains were going past each other in opposite directions. Aerial TV footage showed one side of front of the passenger train had been ripped open. Photos showed that the freight train was carrying crates of beer, and the tarpaulin that covered the cargo train was torn in pieces.

Police declined to comment directly on a report from Denmark's TV2 channel that a large freight container had likely fallen off the cargo train.

Jesper Nielsen, who was on the passenger train, told Denmark's TV2 the train "was out on the bridge when there was a huge 'bang' .... very quickly thereafter, the train braked."

The accident took place on a road-and-rail bridge, part of the Storebaelt system of bridges and a tunnel that link the Danish islands of Zealand and Funen.

The transport system was closed to cars overnight because of strong winds but trains could pass. Road traffic resumed Wednesday with a 50 kph (31 mph) speed limit.

Police spokesman Lars Braemhoej said while "we do not know precisely what caused the accident," one possible cause was that cargo from the freight train fell off and hit the passenger train.

He added there was "considerable damage" on the passenger train.

"Ordinary Danes on their way to work or heading home from the Christmas holidays have had their lives smashed," Prime Minister Lars Loekke Rasmussen said as he issued his condolences.

Police urged passengers to contact relatives and tell them if they were safe and urged people not to share photos or videos of the accident.

Flemming Jensen, the CEO of state-owned Danish Railways, said police and the Danish Accident Investigation Board were investigating the damages. He said the operator "will contribute everything that we can to the investigation."

Bo Haaning of the Danish Accident Investigation Board was quoted as saying it could take months before the cause of the accident could be determined.

Kasper Elbjoern, spokesman for the Danish brewery group Carlsberg, confirmed that a freight train transporting its cargo was involved in the accident.

The government agency responsible for Danish railways said on Twitter that no further trains would cross the Storebaelt link on Wednesday, adding it was aiming to allow train crossings to resume Thursday.

In previous train accidents in Denmark, eight people were killed and 72 injured in 1988 when a train derailed because of high speed near Soroe, west of Copenhagen.

Denmark's worst train accident occurred in 1919, when an express train collided with a stopped train in Copenhagen due to a dispatcher error. A total of 40 people were killed and some 60 were injured.