78 dead in Nepal as flooding wreaks havoc in South Asia 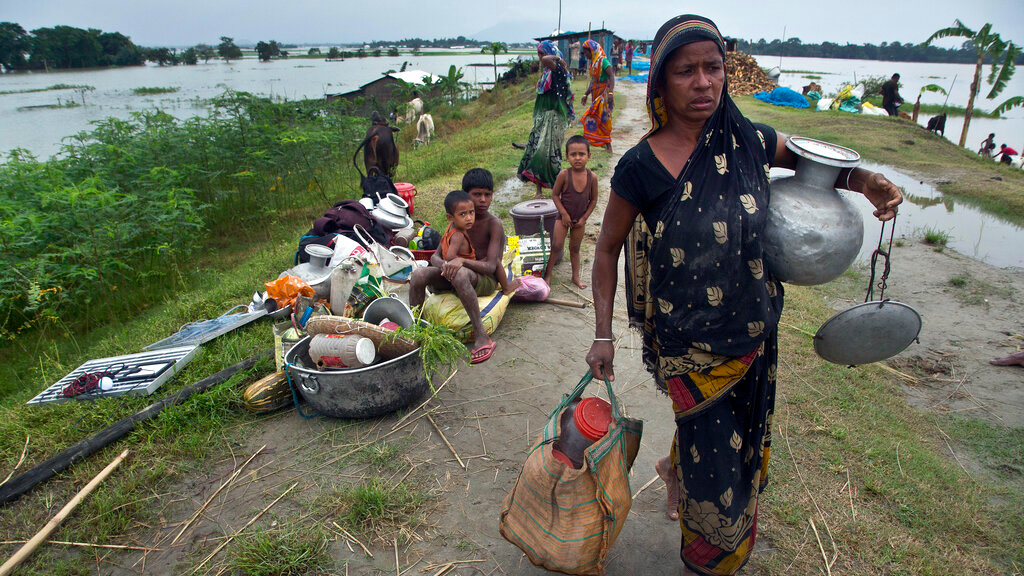 Flood affected children sit near their belongings on an embankment in Pabhokathi village east of Gauhati India, Monday, July 15, 2019. After causing flooding and landslides in Nepal, three rivers are overflowing in northeastern India and submerging parts of the region, affecting the lives of more than 2 million, officials said Monday.(AP Photo/Anupam Nath)

Monsoon flooding and landslides continued to cause havoc in South Asia on Tuesday, with the death toll rising to 78 in Nepal and authorities in neighbouring northeastern India battling to provide relief to over 4 million people in Assam state, officials said.

In Assam, officials said floodwaters have killed at least 19 people and brought misery to some 4.5 million.

More than 85,000 people have taken shelter in 187 state government-run camps in 30 of the state's 33 districts, the state disaster management authority said in a statement.

Atiqua Sultana, a district magistrate, said a flooded river washed away a 150-meter (490-foot) stretch of Assam's border road with Bangladesh, flooding 70 villages on the Indian side.

Around 80% of Assam's Kaziranga National Park, home to the endangered one-horn rhinoceros, has been flooded by the Brahmaputra river, which flows along the sanctuary, forest officer Jutika Borah said.

After causing flooding and landslides in Nepal, three rivers have been overflowing in India and submerging parts of eastern Bihar state, killing at least 24 people, said Pratata Amrit, a state government official.

More than 2.5 million people have been hit by the flooding in 12 of 38 districts of Bihar state, Amrit said.

In Bangladesh, at least a dozen people, mostly farmers, have been killed by lightning since Saturday as monsoon rains battered parts of the low-lying country.

Bangladesh, with 160 million people and more than 130 rivers, is prone to monsoon floods because of overflowing rivers and the heavy onrush of water from upstream India.

Monsoon rains hit the region in June-September. The rains are crucial for rain-fed crops planted during the season.