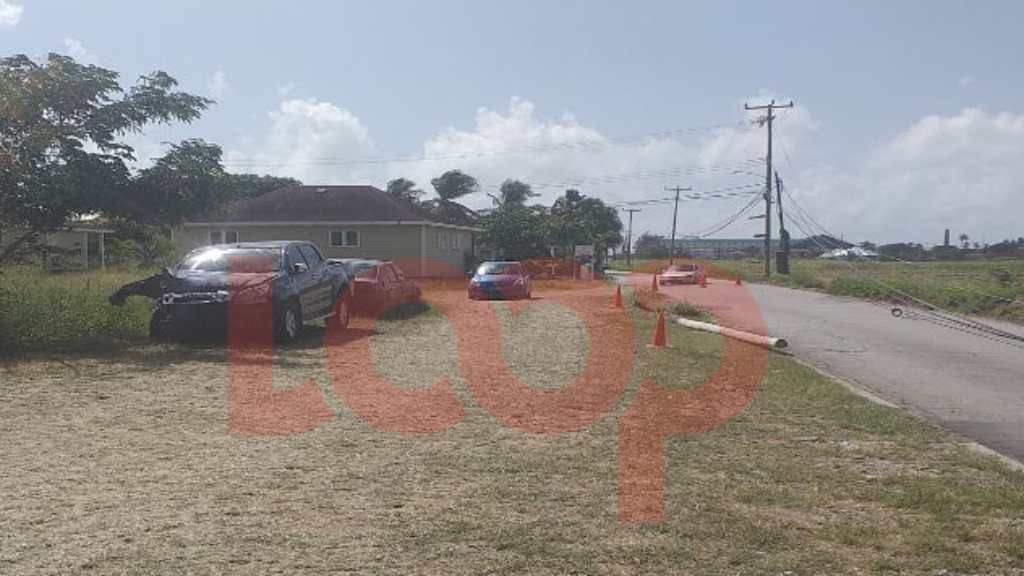 The accident scene on Sunday morning

"Speeding is a problem!"

Sargeant Seibert Johnson of the Traffic Division is once again appealing to motorists to cut their speed after an early morning accident a stone throw away from the dangerous Mangrove junction in St Philip.

With much talk surrounding that intersection and its four roadways after a serious accident with injuries last week, on Sunday around 6am there was a power outage across parts of St Philip including Mangrove, Kirtons and Crane when a pick-up truck struck a utility pole.

Residents of Mangrove, St Philip, in the immediate environs awoke yesterday, Sunday, February 9, to no power and two downed poles.

The outage was a result of an accident involving an Isuzu D-Max that collided with one of the utility poles on the main road from the Rock Hall to Four Roads. The second pole came down like a domino effect.

Traffic had to be slightly diverted as a crew from the Barbados Light and Power Company Ltd. worked to restore power in the area.

The driver of the truck was rushed for medical attention. A wrecker cleared the scene of the one-vehicle accident. Some onlookers commented that it was fortunate no other vehicles were involved in the incident.

Barbados Light and Power workers remained in the area to repair the damage and erect new poles in the area till late in the evening when some residents for a second time in one day experienced another outage.

Power was eventually restored well into the night time.

According to the Barbados Light and Power Company update, the outage occurred around 6.57 am and impacted various areas including Mangrove, Charnocks, Four Roads, Crane, Woodbourne and other surrounding areas.

The Company said crews were dispatched and the power was restored around 8.30 am in all areas except in the immediate surroundings of Mangrove. Work had to continue to erect a new pole with lights and new connections. This took more time.

Then around 6pm the power was cut. This was a controlled disconnection by the Barbados Light and Power Company crew as they sought to put everyone back on the system after work was completed. Reconnection and full restoration occurred at 7.42 pm.