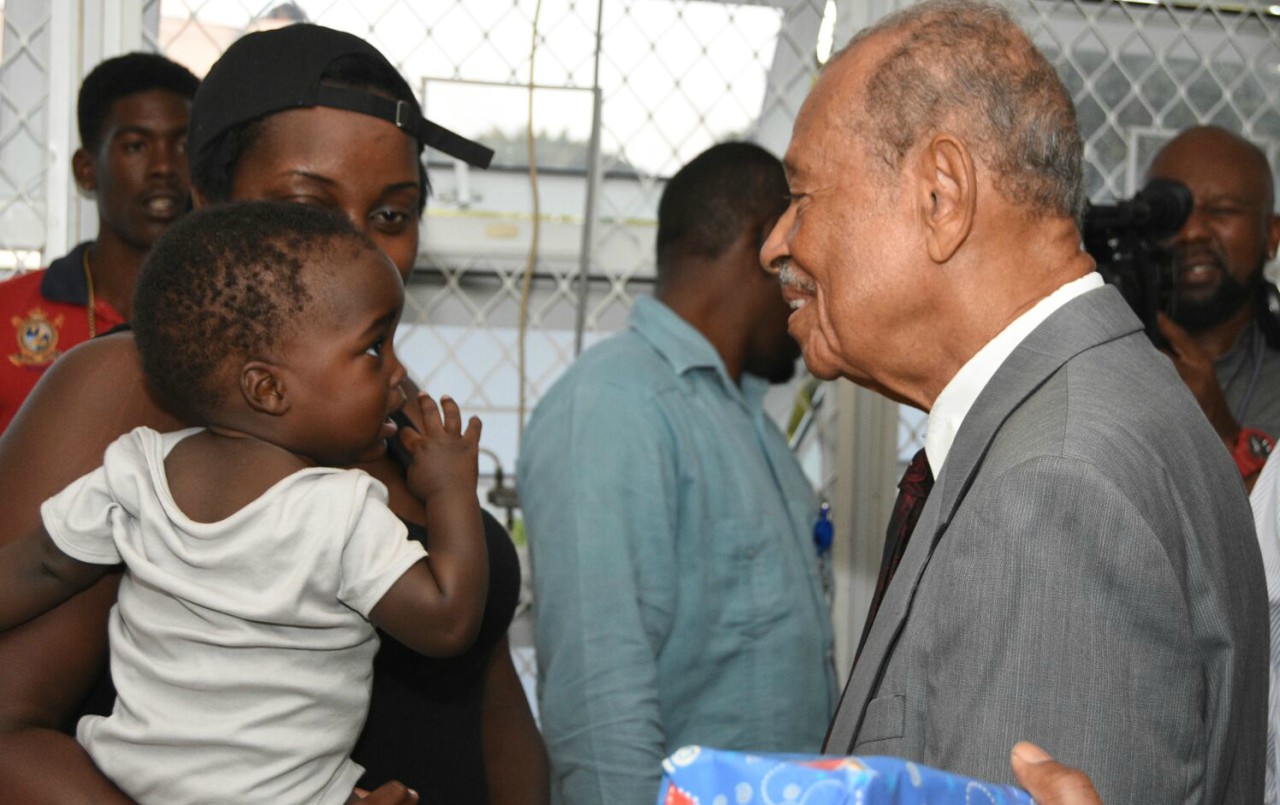 Mother and baby chatting with Sir Philip Greaves, Acting Governor General before he presented a Christmas gift to little one on the Paediatric Ward at the Queen Elizabeth Hospital.

The Queen Elizabeth Hospital's pediatric ward was transformed into a festive environment this week when Acting Governor General Sir Philip Greaves visited to present Christmas gifts to the children.

All 25 children on the ward Thursday evening, many of whom have been diagnosed with asthma, diabetes and sickle cell disease, were given a special treat by Sir Philip during the evening visiting hours.

The Hindsbury Primary School's Choir was also on hand, spreading joy as they sang Christmas carols while Sir Philip toured the ward.

Led by the school's Choir Director Melanie Sheperd, the choir was made up of students from Classes Two to Four, who sang their own variation to Red Plastic Bag's "Something's Happening".

Loudly, they sang, "Christmas is happening, and it's so exciting!"

The presence of the choir comprising singers whose ages were similar to those of the patients they sang to, seemed to bring a smile to the patients' faces, especially when they sang about ham, pork, stuffing and all of the delights children love to consume during Christmas.

"This is something we look forward to every year...it's really an exciting time," said Head of Pediatrics Department Angela Jennings.

Jennings explained that this is usually a very busy time for the Pediatrics Department with many entities visiting the children during the Christmas season.

"From now onward there will be so many activities going on, whether it be a party or persons from the corporate or private sector, Brownies or even schools visiting."

Since assuming the position as Head of Department in June this year, Jennings added that her vision was to make the Pediatrics Department stellar.

"It has been pretty exciting being Head of Department so far. I have a vision for this department and that is the become a beacon of excellence."

Thanked by Senior Sister Marieta Harris and Jennings, Sir Philip made his way out of the hospital at around 6:00 pm, with his mission accomplished.

110 not out for super centenarian Millicent Yearwood!