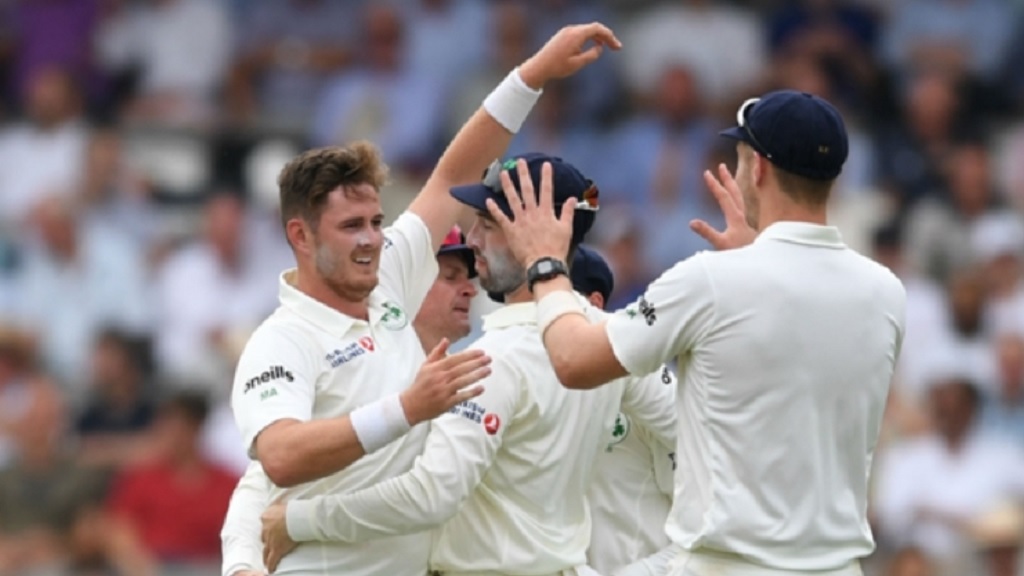 Mark Adair led the way as England failed to build on a strong morning session and finished day two of their Ashes warm-up Test against Ireland just 181 runs ahead on 303-9 at Lord's.

Having resumed play trailing by 122, England had erased the deficit by lunch thanks to excellent batting from Test debutant Jason Roy (72) and the superb Jack Leach, who scored 92 as nightwatchman, and they looked in a strong position at 171-1.

But Adair's dismissal of Leach midway through the afternoon session resulted in a middle-order collapse - Joe Denly (10) run out after a mix up with Joe Root before Jonny Bairstow headed back to the pavilion with a pair.

Moeen Ali fell shortly after tea, and though he had steadied the ship, captain Root (31) followed with an edge off Adair (3-66).

Sam Curran struck an impressive 37 from 29, including four boundaries and two sixes, to boost England's hopes, though he fell to Stuart Thompson before play was halted due to thunderstorms, with Ireland well in the hunt for a famous victory.

After a nervy start in which they lost Rory Burns (6), England settled - Leach hitting five boundaries from nine deliveries before sealing his half-century with a thick edge down to third man, while Roy - who was dismissed for five on Wednesday - crunched a four from a short delivery to bring up a 47-ball 50.

Gary Wilson handed Leach a reprieve when he put down what should have been a routine catch diving to his left following the break, though Thompson's superb delivery to Roy ended the partnership.

Eight runs shy of a maiden century, Leach was dropped for a second occasion, but his luck ran out three deliveries later when he edged to Adair at second slip.

Moeen edged behind to Wilson four overs after the restart, and Ireland's wicketkeeper then atoned for his earlier drop with another spectacular catch to send Root walking before Adair claimed a third wicket of the session when Woakes was caught in the slips.

Will Porterfield almost outdid Wilson when he leapt to try and take in a Curran drive one handed, though the Surrey man was out when he sliced a pull to a man in the deep, and despite some big blows by Stuart Broad, England finished the day knowing they faced a fight to avoid suffering a pre-Ashes loss.

Ireland in control after bowling England out for 85