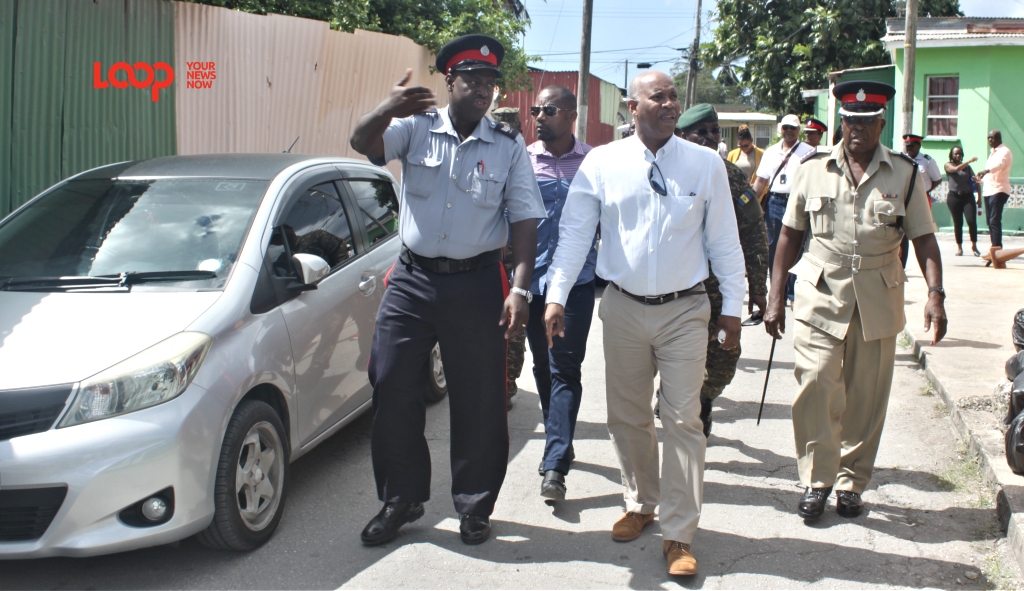 The Attorney General visited and toured Chapman Lane to demonstrate that he is taking his newly assigned responsibilities seriously in the hope of combating the recent upsurge in gun violence.

Related article :Some of Hinkson's portfolio reassigned to AG

Attorney General Dale Marshall was coming under severe fire for appearing silent on the topic of gun crime over the last three months, however, one day after inheriting a number of Ministerial responsibilities including the Police Administration and Preservation of Public Order, the Forensic Services Centre, the Criminal Justice Research Unit and the Police Complaints Authority, the wheels were turning for him to hit the ground running.

Yesterday, Friday, January 18, 2019, the walkthrough of Chapman Lane and New Orleans districts was posited and confirmed and today made a reality.

Following the tour conducted in collaboration with the Police High Command, police officers and members of the Barbados Defence Force (BDF), Marshall says that the exercise was in no way a comprehensive one but it has opened his eyes and ears to the plight of residents.

“This visit is only to show me the tip of the iceberg and I don’t delude myself into thinking that spending 10 minutes with a resident will give me a clear understanding, but it certainly helps to point the direction and I’ve assured them that the police are here to serve them, and to protect them and to get their cooperation.

“So, the task is great but I am confident that we will be up to it.”

Having chatted with some parents and youngsters in the area that was hit by gun violence once again this week, he shared that residents have confessed, “a burning fear of living in these kinds of conditions.”

Speaking to the solution and way forward, he added:

“The depth of our problem is going to be large, great. It’s obvious that I really appreciate being able to visit this area. It has given me the opportunity to hear the other side of the story, and I’m seeing areas really where which have nothing to do with policing. The government is really going to have to come into some of these areas and on a sustained basis make some serious effort in improving those kinds of conditions cause the social conditions obviously create an environment that is ripe for deviant behaviour.

“I have given the residents the assurance that we’re going to deal with the problem.”

And the Attorney General took solace in knowing that numerous residents also have made personal pledges to support the police and government in this fight to end gun violence.