AG: No need for blame game on fatal stabbing 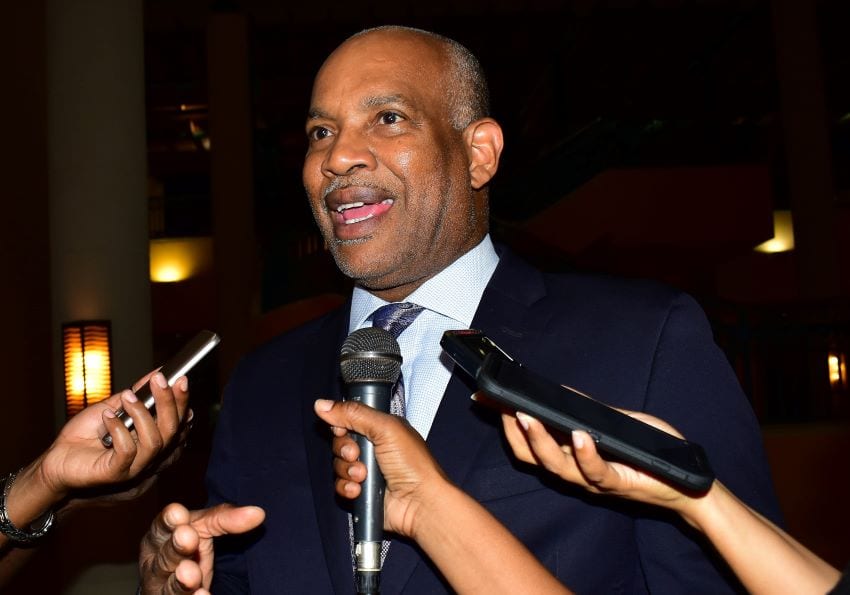 While Attorney General (AG) Dale Marshall has described the stabbing death of a 16-year old Frederick Smith student as “an absolute tragedy”, he believes this is no time for casting blame but for collaborative responses.

Marshall made this clear as he spoke with media representatives on the sidelines of a reception held at the close of the IX IDB Group Caribbean Civil Society Meeting at Hilton Barbados recently.

Acknowledging that everything about the incident represented “a tragic state of affairs”, he said: “It does not speak well for a modern Barbados that a 15-year old boy would viciously stab to death a 16-year old. These people were students of the same school; perhaps not class mates but certainly they would have seeing each other at a time when they should have been developing camaraderie and building interpersonal relationships. One boy is now dead, that’s an irreparable wrong and the other one now finds himself in the hands of the police.

“A lot of time has been spent over the last few days apportioning blame. I’ve seen on social media individuals blaming the Government, blaming the teachers; I’ve seen people blaming the churches and blaming the parents. This is not a time for blame; this is a time for putting our heads together to see how we can deal with this issue. I asked the Commissioner of Police immediately upon hearing about the incident to set up an urgent meeting with the officers of the Ministry of Education and that meeting happened yesterday [Monday, November 11].”

Noting that there was no intention on Government‘s part to have either a “knee-jerk response” or “an uninformed response”, the Minister pointed out that the required response was that of joint action of the administrators of schools as well as significant input from the law enforcement arm, hence his reason for urging the two to work together to try to bring a policing perspective into dealing with the issues.

As he acknowledged the country had a serious social problem that was being reflected in the number of homicides in Barbados, Marshall said this was at an unprecedented level that should not be acceptable to any Barbadian.

Elaborating, he stressed: “What we are seeing is a growing number of young people involved in the taking of human life. This is the youngest one that we have at this point in time; but earlier this year, we had an 18 year-old and a 19 year-old and a 20 year- old and if you look at the statistics you would see that the average age of the persons charged with perpetuating homicides is dropping lower and lower and lower.”.

Stressing he was not for apportioning blame, the AG explained it was about addressing how society, had failed young people and how to grapple with this. Reiterating Government’s plans he said they were going to select the 500 most at-risk households in terms of a variety of factors including being at-risk in terms of poverty, exposure to criminal activity and in terms of those children who are dysfunctional.

“We’ve determined that the ministry with responsibility for social care should draw out those 500 most at-risk households and get a social programme in place so that those households can work their way out of those difficulties. Something as simple as that will make a difference. It isn’t a case where we have thousands of criminals in Barbados. We have a small number of criminals but this small number of criminals is breeding, more in terms of encouraging young people not in terms of pregnancies, but encouraging more young people to get involved in criminal activity and resulting in the growth of their ranks,” Mr. Marshall stated.

The Attorney General, while pointing out that Government was committed to taking pre-emptive measures, maintained the 500 most at-risk family programme was part of this solution and he said Government was also determined to spend a large amount of money in establishing the Youth Advance Scheme targeting the same at-risk youth.

Adding that Government had also, this year, given the Barbados Defence Force resources well over one and a half million dollars to increase the sea cadets, Mr. Marshall noted that in many of our schools’ extracurricular activities were non-existent or participation had been reduced.

“So, this is a problem for our society and we all have to work collaboratively to solve it; the Government is certainly doing its part and more now than ever, we have to make sure that what happened last Friday absolutely never happens again in any place in Barbados.”