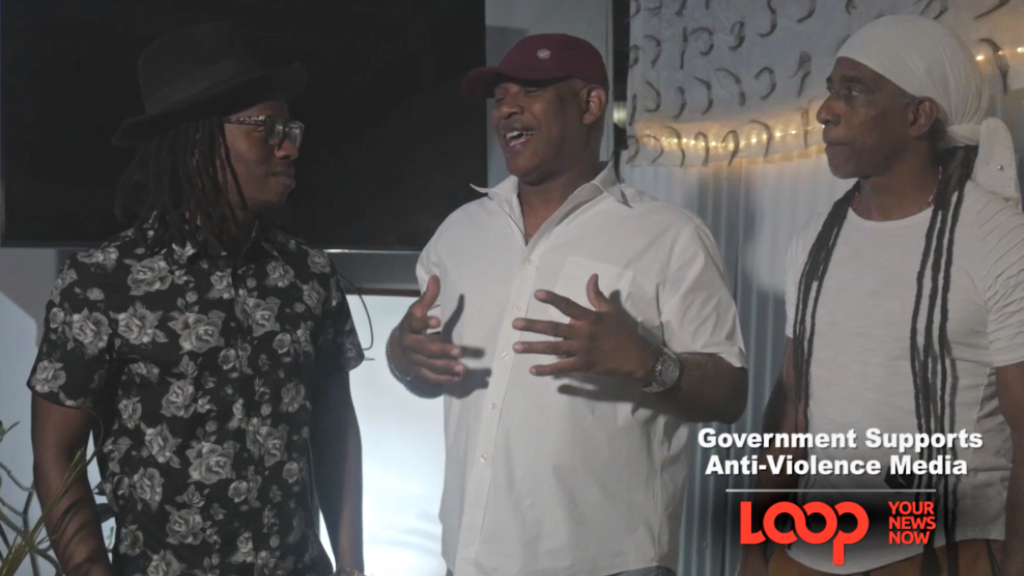 Joe Cloudy being commended by AG Dale Marshall as Aja looks on.

Attorney General Dale Marshall fully embraces the belief that Barbadians need to wake up and smell the coffee in order for us to eradicate violence, specifically gun violence.

Marshall in earnest said that he wants Bajans to open their eyes and give police less work to do.

Lauding Jomario 'Joe Cloudy' Goddard and Aja for their production 'Open ya eyes and see', Marshall said that the video carries a "very powerful message" and "captures the essence of the problem before us."

Acknowledging that "law enforcement always comes at the end, it comes after the tragedy, it comes after somebody has been shot, killed, harmed; our challenge is how to make sure essentially that the law enforcement has less work to do, and the only way to do that, as you quite rightly pointed out, is to open our eyes and see what is going wrong from the time that it starts going wrong."

Looking at the murder rates over the past years, he said that there has been in a spike in homicides for the start of the year but over the last three years there have been increases. Noting that some of the 2019 homicides were different in nature, he admitted that "several are associated with gun violence.

Also pointing out the ages of those committing the crimes and those falling prey and victim in their prime of productive years, Marshall said, "I'm not fooled. I understand clearly what has driven you to this point where you devote your art to try and turn around our society. I can pledge to you and all of the other Barbadians who are interested in working with us, that they will not only see increased policing which comes at the end after the violence has happened, but they will also see a government that is intentionally focused on going into our societies, into our communities, into our schools and trying to deal with the issue of violence, and anger, rage and anti-social behaviour."

Partnering with Joe Cloudy, Aja echoed the sentiment that we must look into the underlying factors. He said that when it comes to the violent upsurge and getting the violence eradicated, there are "social contradictions in the belly of the society" that need to be addressed to prevent the violence from rising. He said that yes there are criminal elements but some contributors are social as well.

To this, the Attorney General added that citizens will see "much more resources" devoted towards tackling those contradictions in the coming financial year.