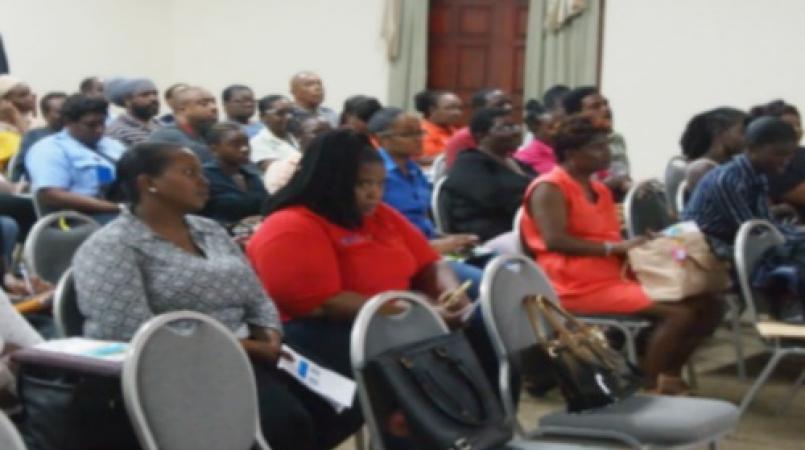 Food vendors attending the health and safety workshop hosted by the Barbados Agricultural Society (BAS) were issued stern warnings to comply with all regulations set out for the festival.

Precautions against improper food handling practices as well as healthy nutritional choices were heavy on the agenda of the mandatory Food Vendors Workshop held today in preparation of Agrofest 2017.

A handful of vendors came out to hear presentation by Community Nutritional Officer, Andrea Griffith on the pertinent issue of non-communicable diseases (NCD’s) when selecting and preparing foods for sale to the public. There was also a presentation by Environmental Health Officer, Lauralyn Blenman-Ali on food safety.

Chief Executive Officer of the BAS, James Paul told the gathering complaining about the rules which have been set out by the Ministry of Health is futile as there will be no compromise on the health and safety standards.

Noting that there have been no reports of food poisoning at the festival to date, he said the onus was on vendors to take responsibility for their actions and follow the rules.

“It will only continue that way if we do what we are supposed to do. When people don’t want to obey the rules we tend to make excuses for them instead of saying to them ‘get with it’ and obey the rules because if you don’t obey the rules you are jeopardizing other people’s futures… and people’s health.

We are asking for your cooperation because we want to ensure that there are no incidents of food poisoning at Agrofest at all.”

Paul went onto add visitors to the island will be in attendance at the festival and vendors have a ‘double responsibility’ to ensure they have a pleasant experience.

“You are the ambassadors of Barbados, you are on the people on the front line. You are the people who will make the difference in terms of if the visitors to this country have a pleasant experience or a negative experience.”

In addition to the stringent health standards, Paul explained the BAS will also be paying close attention to security as he said there have been incidents where vendors abuse the pass system to allow friends and family to enter.

He also said officials at Agrofest will be taking no mercy to patrons or vendors who are caught smoking on the grounds of the festival. Due to preparations for CARIFESTA 2017 access for vehicular traffic will be limited along the main road of Queen’s Park.

Agrofest 2017 highlighting agriculture 50 years and beyond