Air Canada lays off 5,000, France tries to save food supply 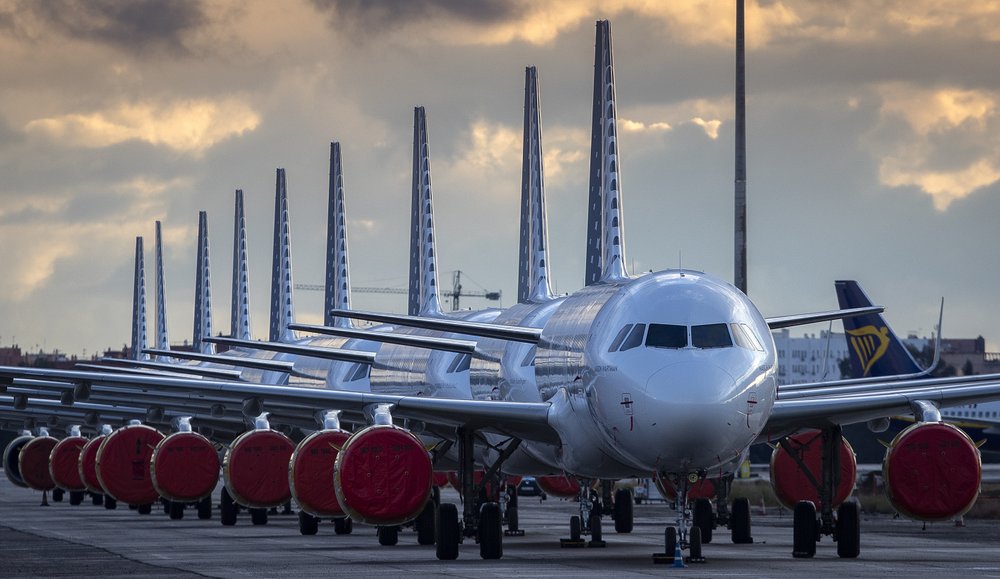 Vueling Airlines planes sit parked in a line at the Seville, Spain airport on Saturday, March 21, 2020, idled due to the COVID-19 coronavirus outbreak. (AP Photo/Miguel Morenatti)

The rapid spread of the coronavirus since it was first reported in China has dealt an unparalleled shock to the world economy.

Following are business developments Monday related to the outbreak as governments attempt to stabilize their economies, companies struggle to cope and millions of people face job losses and disruptions in supplies of goods and in services.

The layoffs will take effect by April and affect roughly 60% of flight attendants. Air Canada says it will suspend most of its international and US flights by March 31. The carrier says employees will be returned to active duty status once flights resume.

The United Arab Emirates is suspending passenger transits through Dubai, the world's busiest international airport, for two weeks to help stop the spread of the coronavirus.

Suspending transit through Dubai, which connects Europe with Asia and Australia, will affect travellers around the world.

HEAVY INDUSTRY: Airbus is cancelling a planned dividend payment and lining up 15 billion euros ($16 billion) in new credit to give the European aircraft giant more cash to weather the crisis.

Airbus is also making pension savings and says it has significant liquidity to cope with the crisis. It had shut several plants last week to adapt them to safer health conditions.

Royal Dutch Shell will reduce its operating costs by between $3 billion to $4 billion for the next 12 months to adapt to the virus outbreak crisis and plunging oil prices. The company is also reducing capital expenditure to a maximum of $20 billion, down from its previous expectation of $25 billion.

FINANCIAL MARKETS: US futures are down more than 3% after shares fell in Europe and Asia as shutdowns aimed at containing the coronavirus pandemic expanded around the globe.

Stocks fell in Paris, Frankfurt and London after a brutal session in Asia on Monday.

Japan's Nikkei 225 index was the outlier, gaining 2.0% after the International Olympic Committee and Japanese officials indicated they are considering postponing the Tokyo Games, due to begin in July.

US futures slipped after work on more stimulus for the US economy hit snags in the US Senate. Top-level negotiations between Congress and the White House continued after the Senate voted against advancing the nearly $2 trillion economic rescue package.

SUPERMARKETS: President Emmanuel Macron urged employees to keep working in French supermarkets and some other businesses deemed essential amid a spreading shutdown imposed to fight the coronavirus.

"We need to keep the country running," Macron said.

Finance minister Bruno Le Maire said Friday the whole supply chain for the food industry must be guaranteed after France shut down this week all restaurants, cafes, cinemas and retail shops that are deemed nonessential.

Many employees are working from home.

Businesses that are allowed to remain open must enforce rules about social distancing, washing hands and disinfection.