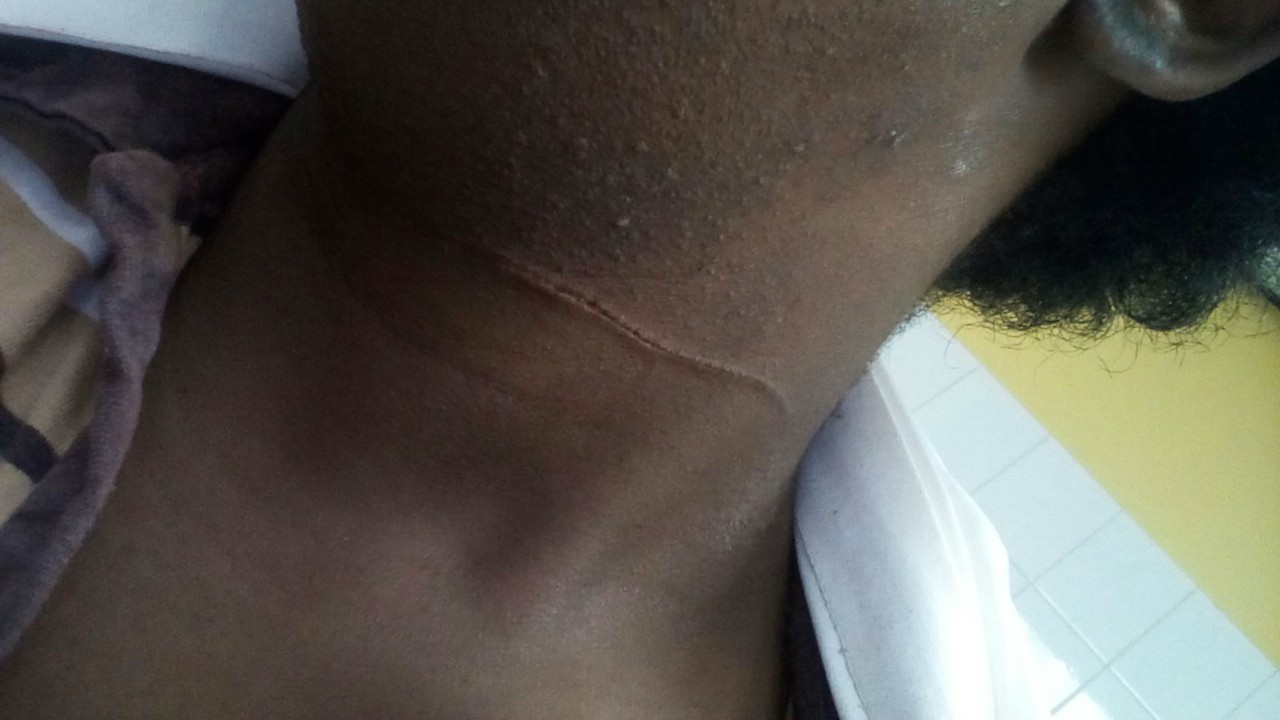 Photo of Alexa's neck after the incident.

Left bleeding as her attacker walked away from the scene out front her home, Alexa Hoffmann feels she has suffered twice – once at the hands of the perpetrator and secondly, due to the failure of some police officers to pursue her matter immediately.

Speaking to Loop News, Alexa, who identifies as female, said that she is left living in fear knowing that her attacker is still at large days after the Sunday attack, but she asserted that she will not flee her island home of Barbados because of this.

Reflecting on the unfortunate incident, Alexa said that the male attacker was a tenant who was staying at her home from December 12, 2017, to last week, February 14, 2018. As his landlord, she said that she had sought to no avail to contact the man and exchange items – to retrieve items he had taken wrongfully from her home, and to collect items of his which were left at her premises.

She said that on learning that his girlfriend wished to speak with her, she was awaiting the arrival of the former tenant and his significant other, along with a friend, who they were walking home in Alexa’s neighbourhood.

But on arriving at her home, everything went awry when she tried to speak to the man about the items in question.

“The trio approached my premises as they were walking down the road, and I greeted them all. The ladies responded, but he appeared not to respond. I called out to him and told him that I had some items to return to him, but he still did not respond. Upon approaching him and addressing him about the outstanding items, he uttered the statement, ‘If you don’t keep off of me, you gine get beat bad… tonight!’ I asked him what he meant by making such a statement to me; at which point he turned around and had pulled a meat cleaver from his pocket. Upon seeing this, I attempted to arm myself in self-defence, and his girlfriend rushed up to try to stop him. He made an attempt to slash me with the cleaver, but missed and hit the young lady in her face. She later showed me a video where she received a laceration to her upper lip. He then proceeded to rush at me, swinging the blade repeatedly at my face, and he succeeded in lacerating my forehead, nose, upper lip, scoring my shoulder and the side of my neck near my throat.

“The force with which he slashed at me with the cleaver was so violent that my glasses had been destroyed – one of the lenses was cut clean in two, and the frames were also cut right down the middle. In the midst of his slashing at me, I attempted to grab a hold of him and disarm him but was knocked to the ground and he continued attacking me. I began screaming and demanding that he got off of me, and eventually he did, with the trio continuing towards his friend’s house while they tried to seek help for his girlfriend’s injuries, while I was left to pick myself up and tend to my injuries.”

Reacting to the situation, she called the Oistins Police Station. When the officers arrived she said, “I showed them my wounds and explained what happened. A forensics officer came and took pictures of the scene, including my home where I had left a trail of blood as I went to the bathroom to try to suppress my bleeding. I gave full information on [the suspect], as well as showed a photo of his ID so they had his exact name, age, height, and I gave a description of some of the tattoos I noticed on his body. I also told them where he went and alerted them to the fact that his girlfriend had been struck in the face with the cleaver, however they insisted that she had to make her own report…

“When I asked about them making an attempt to go to his friend’s house and arresting him, I was simply given a medical report form and told that the doctor at the Queen Elizabeth Hospital must fill it out and I return it to the police station, at which point they will take a statement and be in a position to lay charges.”

It was at this point and then again after her 13-hour wait in the Accident and Emergency Department (A&E) that Alexa felt as though the police had dropped the ball in their response.

Alexa admitted that she had been scarred by her previous interactions with some members of the Force two years ago.

“I have had experiences during 2016 wherein my vehicle was vandalized in January, I was attacked by men outside a grocery store in April, and workmen on a neighbouring property to my home made threatening statements and even attempted to attack me after I had to speak to them about their behaviour causing a nuisance to me in October. In all those cases, I dealt with officers taking excessively long to follow up with me to take statements. In the case of my car being vandalized, the responding officer never took a statement until the end of the month, when my car was vandalized shortly after the start of the month, and in the case of the assault outside the grocery store, that responding officer went on vacation for an entire month, while my attempts to follow up with him were simply met with, ‘That officer is not on duty today,’ and officers simply refusing to take a statement from me as they felt that the behaviour I faced was neither threatening nor violent.”

But her feelings on being treated unfairly escalated after speaking with a Senior Constable at the hospital Sunday night, who was there investigating a different situation.

She said that he advised her, “that the responding officers should have made an immediate attempt to look for the man, however, because they probably assumed that it was a domestic dispute, in other words, they interpreted it as a lovers’ quarrel rather than a landlady/tenant dispute over stolen property.”

Having received stitches to her forehead and nose, and being discharged, Alexa returned to the police station and submitted her form, but was met with another hurdle as the responding officer was not on duty and on leave for two days. It felt like a repeat of 2016 in 2018.

However, there were two silver linings.

Alexa said, “A sergeant eventually instructed that the desk officer take my statement that I could be sent about my way, however by the time all was said and done, I had been in the police station for more than two and a half hours.”

And after following-up February 20, yesterday, with a sergeant attached to a police department which works independently of the stations, Alexa said that the sergeant’s “attitude towards incidents like mine is more serious. When I spoke with that sergeant and informed her of the situation, she said she would make some enquiries and get back to me. Subsequently, she contacted me and asked for some information which I readily had.”

Alexa told Loop News that back at the police station she learned that a search for her attacker was being executed, however, he was not in custody up to the time of her visit. But, it was not a smooth exchange of information, in trying to learn the developments with her case from the desk officer, she reported that the sergeant was “abrasive” and she “made a transphobic statement referring to me as ‘he/she/I don’t know!’”

As police continue to investigate the matter, Alexa says that she will not be leaving her homeland to seek asylum abroad as other members of the LGBT community in Barbados have done. In the interim, “I will take measures to make my home more secure and I will simply exercise better trust in my instincts and better practices in who I allow into my personal spaces. I’ve been told my main flaw is that I’m too nice and I go too far out of my way to help others. Well, I never understood it until now, but the lesson is well learned.”

And she hopes that whoever needs to be trained or retrained within the Force to see changed attitudes come about, is educated and informed sooner rather than later. Some officers received training almost a year ago, March 2017, over four days, in handling cases involving members of the LGBT community, under the Movement Against Discrimination, Action Coalition (MOVADAC).