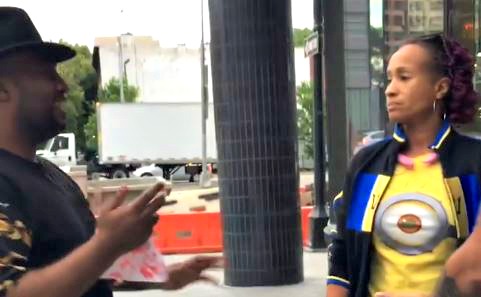 Do not mess with the Caribbean soca queen!

New York entertainer and comedian, Queenzflip learned the hard way that Bajans do not play.

He teamed up with New York-based radio personality DLife of FRPtv to prank Caribbean Soca Queen, Alison Hinds while on her way to a studio interview with FRPtv.

Queenzflip, who earlier this month played a similar prank on Jamaican dancehall artiste Mr Vegas, shared a video on his Instagram account this afternoon with the caption:

"So I pranked the #SocaQueen @alisonhinds with the help of @realdlife , BUT SHE BUSTED MY BLASTED NOSE!!!...1st Hit - was on the neck chin area. Then I turned around and the 2nd & 3rd hit was in the nose smh lol ... BUT SHE WAS A GOOD SPORT SHE STARTED TO SMILE AT THE END & I did say sorry and we are now good."

He also posted another video clip showing what happened after they got out of the car and he was explaining that it was a prank.

"You busted my nose, man!" he told Hinds.

"Wha you expect?" she replied.

The video clip of the prank showed Hinds in the backseat of a vehicle, while Queenzflip posed as an Uber driver. He asked Hinds if he could play some music while they drove, saying:

"I have a condition called 'Mizzettes'. When I play music, I get crazy."

Hinds agreed and began to smile when he put on her hit song, Faluma. However, the mood quickly soured when he started shrieking and touching her leg.

"Don't touch me, man!" Hinds yelled, as she threw some swift jabs.