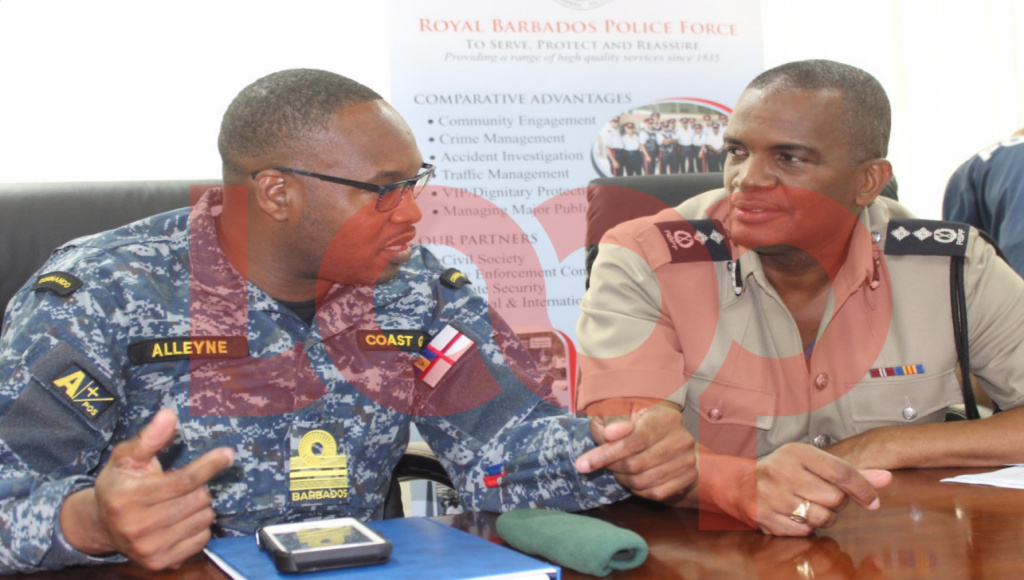 Commander of the Barbados Coast Guard, Lieutenant Commander Ryan Alleyne in discussion with the Deputy Commissioner of Police, Erwin Boyce

Despite more extensive searches being conducted today, there has still been no trace of missing US couple 32 year old Oscar Suarez and Magdalena Devil, 25, who disappeared on Monday afternoon.  Police tonight issued a statement in a statement issued on Thursday night, noted the Police Marine Unit, the Barbados Coast Guard and Regional Security System Air Wing (RSS) conducted a search extending as far as the North and South of the island but were unable to locate neither the couple nor the jet ski that they had rented.

Meanwhile, back from extensive travels on Government business Prime Minister Mia Mottley said this afternoon the search would be extended for another 72 hours in to “make sure that we are doing everything humanly possible because none of us can bring back life.”

With close to 72 hours elapsing since the disappearance of American couple, 32-year-old Oscar Suarez and Magdalena Devil, 25, on a jet ski off the West Coast of Barbados on Monday, Commander of the Barbados Coast Guard, Lieutenant Commander Ryan Alleyne who is leading the search and rescue effort is assuring that everything is being done to locate the pair. 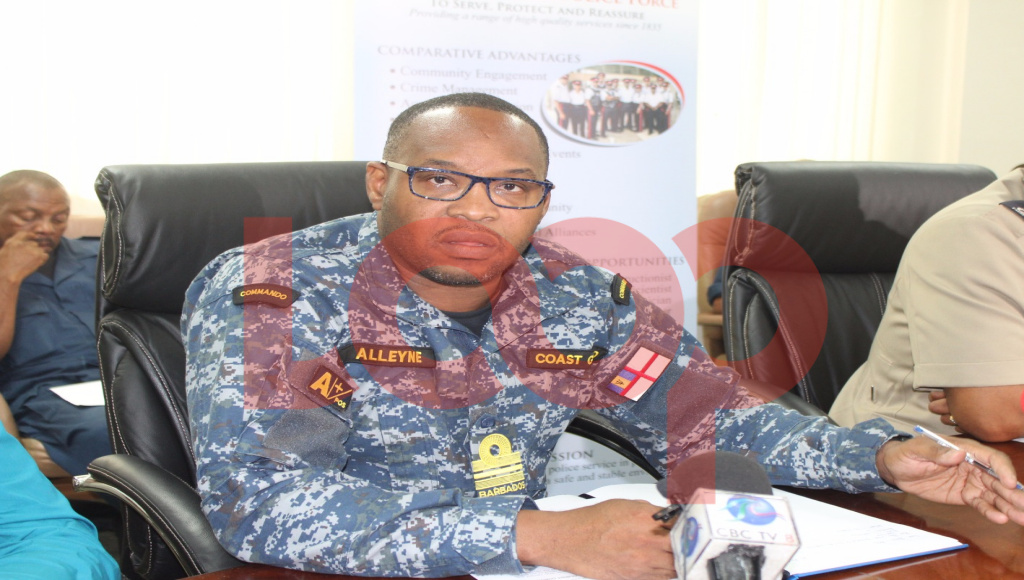 He told the media in addition to the unit’s off-shore patrol vessels, the vessels from the Royal Barbados Police Force’s Marine Unit, the Air Wing of the Regional Security System (RSS) are involved in the extensive search, and they have also asked their colleagues in the Coast Guard Services in neighbouring St Vincent and the Grenadines and St. Lucia to be on the look out, just in case, and they have taken up an offer from local businessman Ralph “Bizzy” Williams to use his private plane.

In addition, the Bridgetown Port is also involved in the exercise, issuing along with the Coast Guard, hourly “pan pans” - bulletins to marine traffic, including cruise, cargo, fishing and to other vessels using the water, asking them to be vigilant.

The same is being done by Air Traffic Control at the Grantley Adams International Airport to all air traffic leaving and arriving in Barbados.

Suarez is the father of a 10-year-old boy and a 5-year-old girl from a previous relationship and is employed as an Assistant Director of dining services at a New Jersey-based company called Compass Group. Devil, who celebrated her 25th birthday on June 19, works as a baker and runs an Instagram account where she showcases her culinary creations. They arrived in Barbados on Saturday, June 22, and registered as guests at the Discovery Bay Hotel in Trents, St James.

According to an official police report, they rented a jet ski on Monday, June 24, around 2:34 p.m. from an operator at Holetown Beach, which is not far from their hotel, and proceeded out to sea. When they did not return, the operator enlisted the help of other operators to conduct a search.  When the two were not sighted, the police were alerted.

Lt Cdr Alleyne, detailing the Coast Guard response said, they first received the call just after 4 p.m. on Monday and dispatched one of the fleet's smaller boats to immediately start a search on the western coast, and on the inner environs of Holetown.

“After several hours and not seeing either the two persons or the jet ski, we intensified the search, using one of [the] bigger vessels [we use for] offshore patrol.  That vessel would have searched throughout the night on Monday into Tuesday morning. The search stretched as far West as 25 nautical miles West North West, in trying to do a sweep to see if we could see either the jet ski or [the two missing persons].  Up to that time up to that time we came up empty-handed.

“With that, we asked for some assistance from the RSS from the Air Wing and they then flew also in the area of Holetown, and approximately 25 nautical miles west off Barbados, as the drift would indicate that the (two) would be drifting in a northwesterly direction.  That search also came up empty.  At this point [Wednesday 4:30 p.m.], vessels are still at sea combing the areas to the North West of Barbados.  We have also made contact with the St Vincent and the Grenadines and the St Lucia Coast Guards [asking them] if any jet-ski may come up in their coastal surveillance to please notify us also,” the Coast Guard Commander said.

Both visitors were scheduled to leave Barbados on June 29. 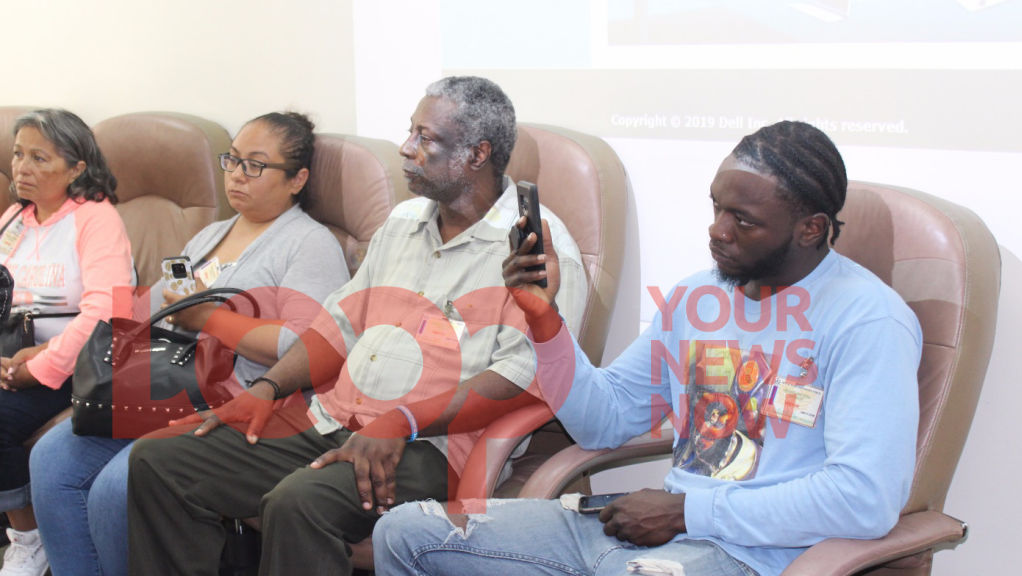 NY BTMI office on the job; Closed-door meeting with families

Alleyne was speaking as police, Coast Guard and RSS officials along with the Barbados Tourism Marketing Incorporated (BTMI) held a press conference to address the issue.

They were accompanied by Devil’s father, Antoine Devil (second from the right in the picture above) and cousin Eric Pierre along with Ninfa Urrutia (left)  and Susanna Cruz, the mother and sister of Suarez respectively who arrived on island on Wednesday afternoon, just ahead of the emergency press conference.

The BTMI’s Chief Executive Officer William "Billy" Griffith noted since the news broke of the American pair’s disappearance, it has been getting much attention from US media outlets, particularly those in the New York and New Jersey area. Suarez and Devil are from New Jersey. 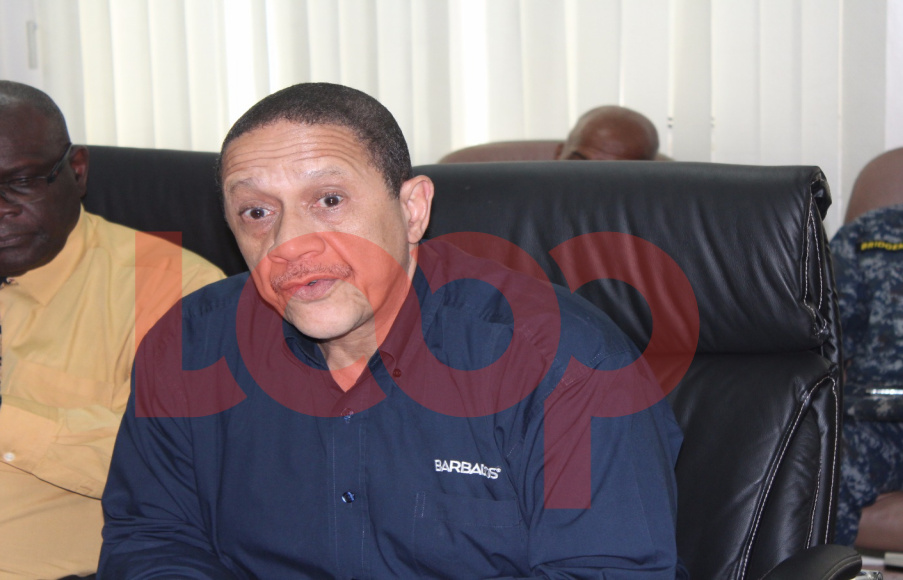 “We have been contacted by our New York office which has certainly been very involved in the situation from the start.  Our [US] Director, Petra Roach along with myself  . . . . we have a full-service Public Relations agency in New York City and our job is really to respond to any queries from the overseas media at this time and literally to translate to them any official statement and updates that are coming from the relevant authorities here in Barbados . . . . and also to assure [them], the local authorities are doing everything that they can to locate these missing people at this time,” he said.

Following the press conference, officials held a closed-door briefing with the family members.  Urrutia had complained in the US press that information about what was going on with the search for her son and his partner was not forthcoming from the authorities.

"I've been calling; I call and call the police, the U.S. Embassy in Barbados, they can't provide me with any answers.  They haven’t called me back to let me know what I need to do or find out what’s going on with my son. They're just not calling back," she told ABC News in the initial stages.  Earlier, on Tuesday, one of Suarez's cousin said a GoFundMe has been set up, with a goal of $30,000 to fund relatives' flight to the island nation and to hopefully bring everyone home safely.

Venezuelans missing at sea after boat sinks near the Bocas