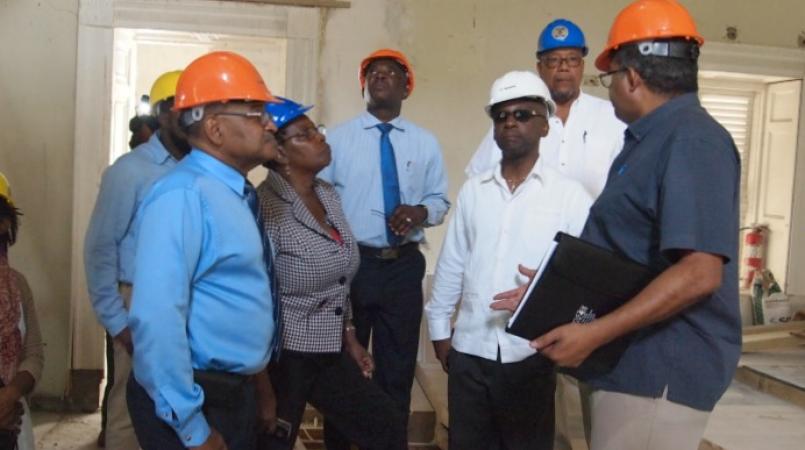 Officials from the Ministry of Culture conducted a progress tour of Queen’s House which houses the Queen’s Park Gallery and the Daphne Joseph Hackett Theater.

Minister of Culture, Stephen Lashley spoke to the press following the tour where he revealed the total cost of the renovation work is $5.9 million BDS.

The facility was officially opened in 1991 and was then closed down in 2005. Lashley said since that time the Ministry of Culture made paid special attention to the buildings to ensure that restorative work is commenced.

He noted the renovations were happening at a critical time in light of the preparations for Carifesta XIII. The regional festival will be held in Barbados on August 17-27, 2017.

“It is all happening at a very critical time because we hope to have these buildings in time for Carifesta. From all indications and given the pace at which the contractors have propelled this work it does look as though we will meet that target. The building is due to be completed by the 7th of July and after that we will get into the work of outfitting the building.”

The building when completed will be outfitted with several modern features including an elevator for access for those in the disabled community as well as male and female dressing rooms. There will also be expansions to the Queen’s Park Gallery.

Lashley said the new Queen’s House is testament to government’s dedication to growing the cultural industries.

“We have a lot of confidence in the sector to drive revenue generation as well as flows of foreign exchange. This is critical for us and for us to be able to restore these buildings is indication of the level of seriousness that we have in government, particularly when the economy is faced with some challenges. We are very serious about ensuring that we propel that growth and we allocate the resources to ensuring that our buildings are renovated and maintained.”

He added the Ministry will be rolling out a maintenance schedule to ensure history does not repeat itself.

“All in all we will have an enhanced facility. I think it is a tribute to the cultural industries over the years. Over the years we have had many of our facilities going into a state of disrepair for various reasons. But as we focus the country’s attention on the importance of the cultural industries sector, we have ear marked that to be a key plank on which we will begin to rebuild the economy of Barbados.”

The work is being headed by CRS Building and Maintenance along with SRM Architect Limited.