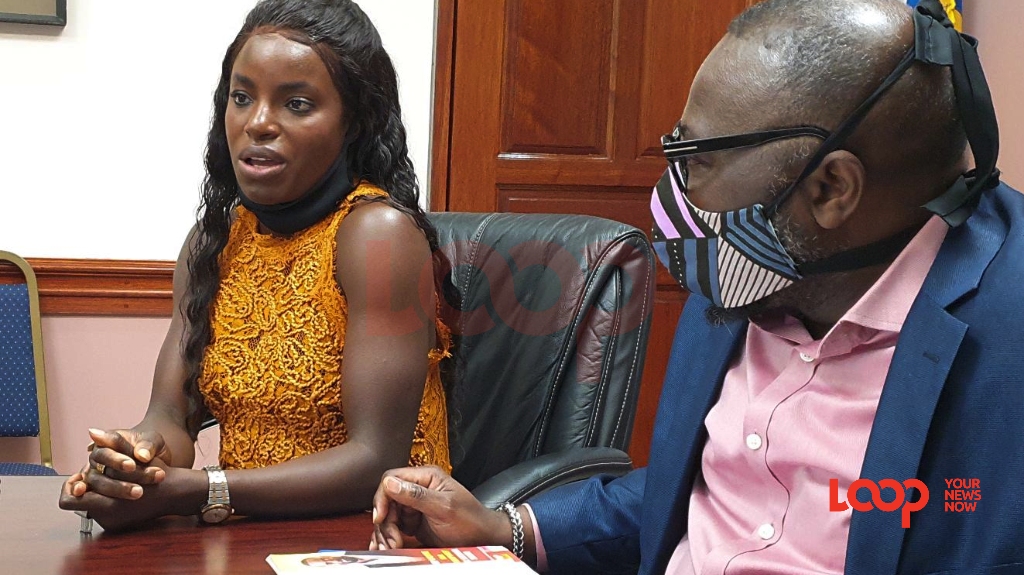 Eniola Aluko and Minister Dwight Sutherland at the Ministry meeting.

Eniola Aluko has said that she is trying to flip what has been "a difficult few days" in Barbados into what could be "a very powerful, positive partnership and relationship".

Director of Sports with Aston Villa and former England footballer, Aluko, met with the newly-appointed Minister of Sports Dwight Sutherland on Tuesday (August 11) at the Ministry of Youth, Sports and Community Empowerment.

Stating that she firmly believes in the scripture that says 'All things work together for the good', she told the media:

"I do love the saying out of every disappointment comes a blessing. All things work together for the good. I'm a definitely Christian, a person of faith and I definitely believe that.

"Being sat here after a difficult two days in Barbados, definitely gives me joy and brings life to that saying. So thank you for having me."

Aluko said that she is in perfect position to help Barbados as it works to develop football locally. Her role as Director of Football is really to develop a successful women's team in England, "where football is almost like a religion...

"Why I am so passionate about my job and so blessed to be in that position is that I have the opportunity to develop young women, young people, inspire and allow them to aspire to be great, and that doesn't just stop in Birmingham where Aston Villa is."

She said that she has the power to recruit players globally and this can renoun to Barbados' benefit.

"One of my passion points is to do that [recruit] in emerging economies, emerging countries like Barbados and actually one of the fundamental things that I wanted to achieve coming into the job at Aston Villa was to connect with the community in Birmingham, the local community if Birmingham is heavily represented by the West Indies, so naturally the best way to connect is to have players from the West Indies that wear the badge and wear the badge with pride."

And against that background, she said that it was is "great" to be sitting at the table literally and figuratively with the Sports Minister of Barbados.

She said that this talk can be "the start of a relationship" that hopefully looks at the local talent particularly for girls and young women "who potentially could wear an Aston Villa shirt if they're talented and hard working and have all the aspirations they need and obviously moving forward to hear that there is an aspiration for 2027 to have Barbados represented in 2027 World Cup is amazing."

Having played in three World Cups, she said that hearing about and learning of "a huge plan for young Bajan girls and boys to aspire to be representing their country at the World Cup, you know I'd definitely be happy to be a part of that!"

Having tweeted that this is her second and last time visiting Barbados, Aluko sang another tune by the end of the discussions.

Asked if she would return to Barbados, she said: "Yes" and added:

"I am keen to recruit from all over the world, that is my job, to recuit the best talent but it's not just about the talent, it is about who the talent is and with a huge Bajan contingent in Birmingham it makes sense to potentially come back, particularly the nearer we get to the World Cup and the more Barbados plays games, it makes sense to potentially come back and watch and see how the infrastructure is developing, so absolutely yes!"

And having heard that much of the talent in Barbados is untapped was music to her ears.

"It's untapped, that's a good thing to hear that there are hidden gems here", she said that would be great if she got to scout before her competitors - "Chelsea and Manchester United who have bigger names and wish to tap up the same talent."

She said this has been an eventful trip and "this allows me to think forward and develop a relationship and partnership that can move forward."

Aluko stressed that she does "really love" Barbados. She said that on her first visit she came in 2015 for her mum's 50th anniversary and last week returned for a holiday for a week.

Despite the whirlwind of negative events on her first days after "a misunderstanding" and her "error" having breached COVID-19 protocols at a quarantine facility and facing a Magistrate for her infraction, she said that she is "really pleased" to leave on "a positive note".

Aluko insisted that she has made new friends and new people who can work together with her "to really change the future of sport both in Barbados but hopefully globally."

Minister Sutherland indeed referred to Aluko as his "new friend" and hopes that much can come after today's talks.