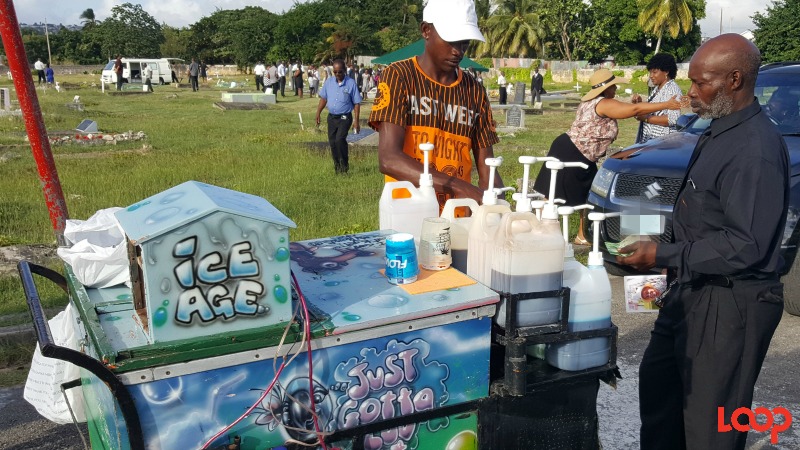 Andrew Maynard rose like a phoenix when he could have wallowed in grief. He can best be described using one word – creative.

Ever seen a sno cone man do a straw trick?

If no, then you have never bought a sno cone from 29-year-old Andrew. If yes, it’s not something you will ever forget, even if for no other reason besides the fact that it caught you by surprise.

Turning 29 today, Andrew chatted with Loop about how it got started on a day just like today over a decade ago.

He wasn’t stepping into an unknown field though, because he was raised around the sno cone business. “I used to do it before but not seriously.

“My father was a snocone man too and his customers hook on to me, but I still never expected to get so far.”

Fourteen years in the business he said that his services are in high demand. “I do a lot of parties. I do parties at Coverley and with the Barbados Tourism Marketing Inc., I do a lot of jobs.

“And nah, I didn’t expect to go far in this business.”

He was even at Kensington Oval on stage during the 50th Anniversary of Independence Concert.

Usually you can find Andrew in Westbury Cemetery most of the time but he has “nuff spots, not just one, nuff.”

Asked what he believes has kept him going and growing over he years, he said, “The customers honestly.”Andrew explained that some persons come to him and say “Good job!” He said, you must like your job, you can’t take to work your frustrations. “You got to like your job first and then by liking your job you are going to go out there with a good personality and passengers will like your personality and like you and come to your business.”

But he also keeps changing the sno cone game.

“I do the straw trick and I does be creative. We do sno cones with the sprinkles, natural juices like natural lime, carrot, beets… I does just try to be creative with it.”

At Sports time he comes good too. Smiling he said, “I sell different colour cups. I get green cups if you’re in green house but them cups expensive so I don’t do it too often but I stay creative.”

Related article :17 ways to beat the heat in Barbados

Andrew of Belair, St. Philip is one of eight boys. He has seven brothers and four of them are in the family sno cone business as well. He said, “When my father died, he died and left one sno cone cart, but we buy five more.”

Deeming himself “the best of them”, he laughed and said that his brother who looks most like him Adrian Maynard is trying to do the straw trick too now. He said people are on to their sprinkles trend but the straw trick is still his alone at present.

Talking about his trick he said people of all ages does start freaking out and request to have the straw flicked on their ears especially.

And with others watching and learning behind the scenes, in terms of what’s next, he just said, “I have a lot of ideas but have to plan and take the time.”

Terry is committed to his coconut trade

Made My Day: Refreshing way to spread the love