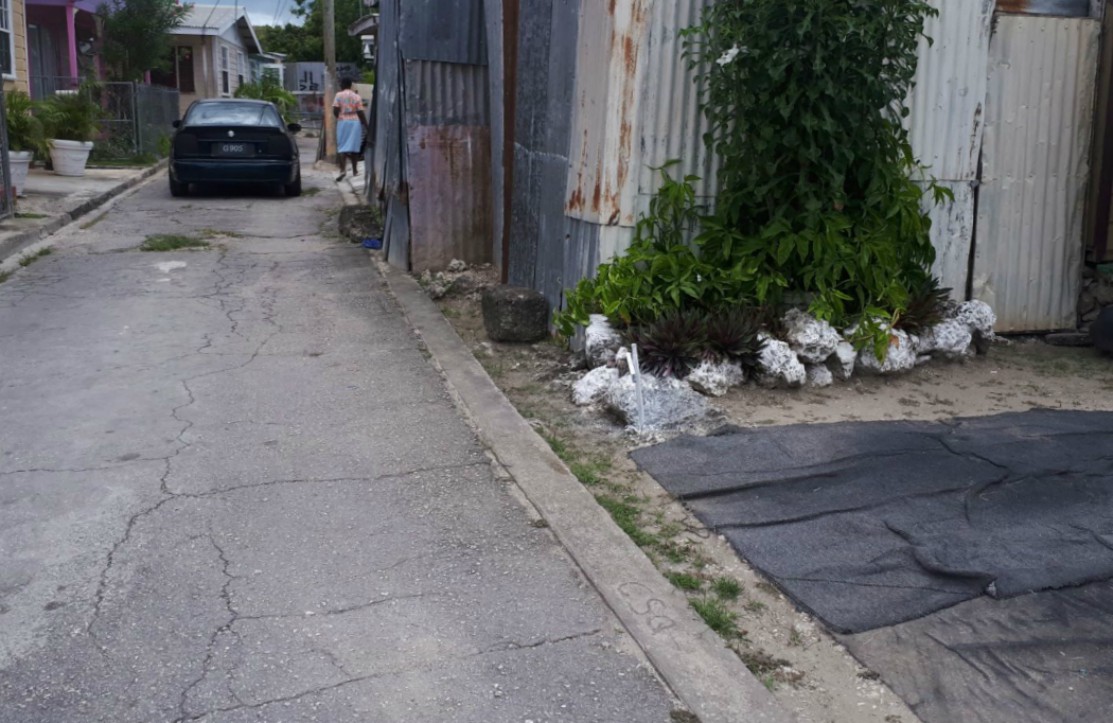 The spot where 70 year old Robert Quintyne collapsed and died.

At three score and ten, Robert Quintyne's final moments were spent protecting a female from an angry mob of young people who were intent on doing serious damage to her.

The elderly father and grandfather from 1st Avenue Alleyne Lane, Passage Gardens died a few meters away from his home on Wednesday evening, throwing the close-knit St. Michael community into a state of mourning.

Police received a report about 6:30 pm that a man had collapsed and fallen on the roadway. On arrival, police found the body lying on the ground. Medical attention was summoned but the man had already passed away at the scene.

Loop News visited the community today where residents recapped the lawless and unfortunate circumstances which led to Quintyne's death.

Neighbour and friend, Jennifer Phillips said she last saw the deceased sitting at the top of the gap around 6:15 pm and she remarked that he had started his liming earlier than usual. Phillips said shortly after she heard a commotion on the outside and upon investigating further, she saw an angry mob of young people from the district running toward a young lady.

"When I came outside this whole group came up, you would swear it is a Kadooment band. A whole set of youngsters, a whole crowd was coming and he [Quintyne] was in the front. The young lady he was trying to save, he was walking and trying to stop her from going back down and also stopping them [the mob] from getting at her."

Phillips said she shouted toward the deceased asking him what was the cause of the commotion. She said it was during fracas that the deceased was hit and also received a jump kick from one of the youngsters in the group.

"I went to him and say 'Bert what happen. What happen with you and she?' Then he told her 'go inside, I tell you go inside'. Then she turn to go back and he was trying to get to her away from them and he [was] huffing and puffing."

Phillips said the deceased was finally able to get the young girl away from the angry mob and was walking toward his home when he collapsed.

"So when he get here I ask again what had happened. He went to speak to me, I did not hear what he said because I was still watching the crowd, then he fell and hit his head on that rock."

Phillips said she watched the deceased take his last breath right on her front lawn, adding she was so shocked she could not move or talk.

She said that Quintyne's daughter, Antonia Alleyne, on hearing the commotion came out of the family home to pursue the young lady at the center of the dispute where she saw her father's body on the ground. It was then an ambulance was summoned and Quintyne was pronounced dead.

Phillips explained the young lady, who Loop News was unable to identify during the visit to the area, is a friend of Quintyne's. She said the mother of the young girl is also close friends with Quintyne and Phillips speculated that he, by request of the mother, was asked to keep an eye on the young girl to keep her out of trouble.

She added, "It is so sad that he had to die saving someone else."

While Phillips was sympathetic to the circumstances leading up to Quintyne's death, his daughter was extremely angry with the mob who she believes caused his death.

Alleyne did not give the media an official comment but she vented loudly while being comforted by friends. She said she believed her father's death was caused by a group of "savages" and they should be held accountable for the emotional damage they caused to her family.

Neighbours said Quintyne will be remembered as being a friendly person who "mixed up with both young and old".

Police said investigations into Quintyne's death are ongoing and will be treated as unnatural, pending the results of a post-mortem.

Shots rang out as EMTs tend to collapsed man

Man dies just outside his home