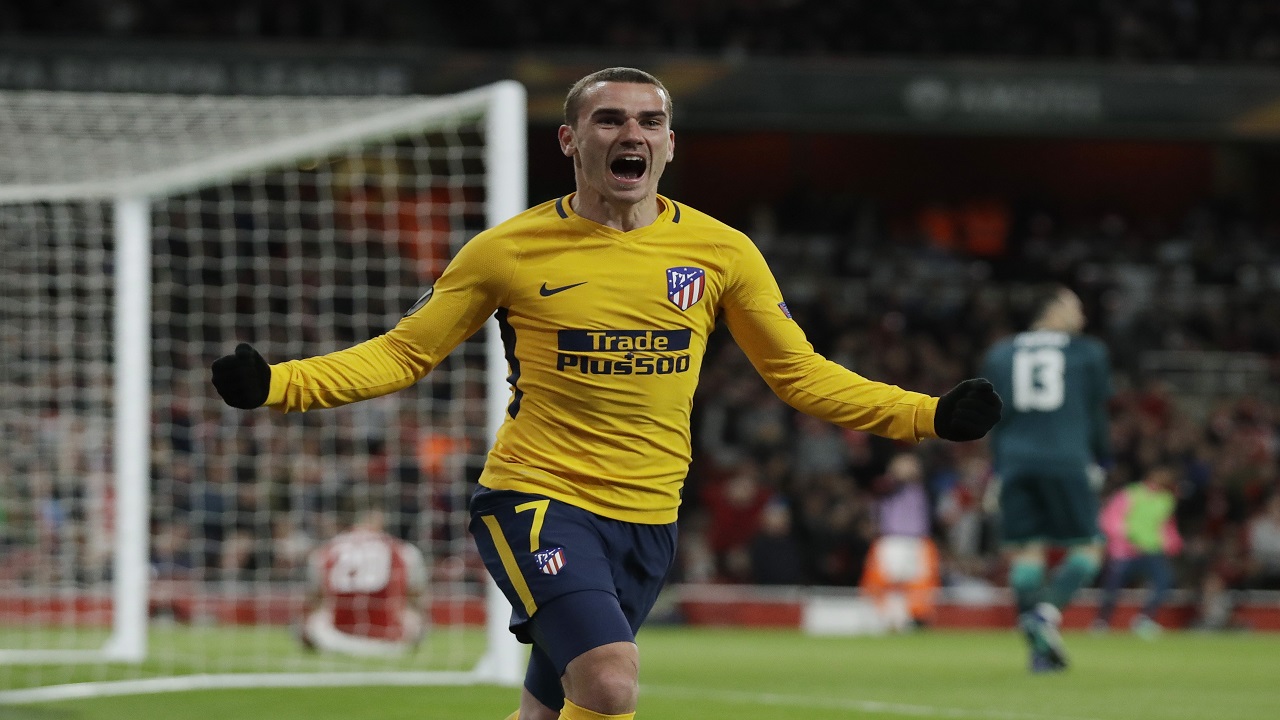 In this Thursday, April 26, 2018 file photo Atletico's Antoine Griezmann celebrates after scoring the first goal for his team during the Europa League semifinal first leg football match against Arsenal at Emirates Stadium in London.

With the Europa League final less than a week away, Antoine Griezmann is in the middle of a tug-of-war between Atletico Madrid and Barcelona.

Spanish media is rife with reports that Griezmann will soon be on his way to Camp Nou to join Lionel Messi.

Barcelona president Josep Bartomeu said this week in an interview on Catalan radio RAC1 that his club met with Griezmann's agent in October amid speculation that the France forward has long been ready to move. That acknowledgement came after Barcelona spokesman Guillermo Amor said in December that "there could have been an approach" made by the club.

Barcelona striker Luis Suarez also appeared to speak of Griezmann's arrival as a done deal when in a recent interview he said that "he isn't coming here to take anybody's spot, but rather with the ambition to do important things on the best team in the world."

Atletico has cried foul play. It says Barcelona is causing discord among its ranks before it plays its most important match of the season: the Europa League final against Marseille on Wednesday.

"We are fed up with Barcelona's attitude," Atletico club executive Miguel Gil Marin said Tuesday. "For the president, a player and a club executive of the same club to speak in the way they have about the future of a player who has a contract (with another club) and do so just a few days before a European final seems to me to represent a complete lack of respect for Atletico Madrid."

Atletico coach Diego Simeone, however, declined to comment directly about the situation on Wednesday, only saying that Griezmann "is training well as always."

The 27-year-old Frenchman is under contract with Atletico until 2022.

But his buyout clause of 100 million euros ($118.5 million), which appeared intimidating enough before last year's 222 million euro blowout by Paris Saint-Germain to pry Neymar from Barcelona, now looks like a relative bargain given his highly-coveted attacking talent.

Griezmann has said that he wanted his sister, who acts as his agent, to clear up his future before France starts the World Cup in mid-June.

"I want to go to Russia with a clear head," he told L'Equipe in March. "I've told my sister that whether not I stay (at Atletico) or not will have to be decided before (the World Cup)."

Griezmann is the main thrust of the attack with his speed, passing and knack for scoring difficult goals on Atletico's otherwise workmanlike squad forged by the defensive-minded Simeone.

He has scored at least 25 goals per season in the four campaigns he has played for Atletico, and Barcelona appears to envision him playing on the left flank where Neymar once romped next to Messi and Suarez.

Griezmann arrived at Atletico from Real Sociedad in exchange for 30 million euros ($35.5 million) as a promising player in 2014, but few expected him to become one of the most desirable talents on the continent.

He has been linked with Manchester United, but a possible departure last year was impeded by a transfer ban imposed by FIFA on Atletico for breaking rules regarding underage players. That ban ended in January.

So Griezmann has stayed in the Spanish capital and again was the leading force behind Atletico's challenge to Barcelona for the league title and its run in the Europa League.

Griezmann's late goal at Arsenal earned a 10-man Atletico a valuable 1-1 draw in the first leg of the Europa League semifinals last month. Atletico then won 1-0 at home to advance to the final.

The dispute over his future will likely put even more pressure on Griezmann as he hopes to break his run of bad fortune in finals.

Griezmann missed a penalty kick during a loss in the Champions League final against Real Madrid in 2016. And just six weeks later his France team lost in the final of the European Championship at home against Portugal.

Atletico will play at Getafe on Saturday in the Spanish league as its last warm-up before the Europa League final in Lyon.