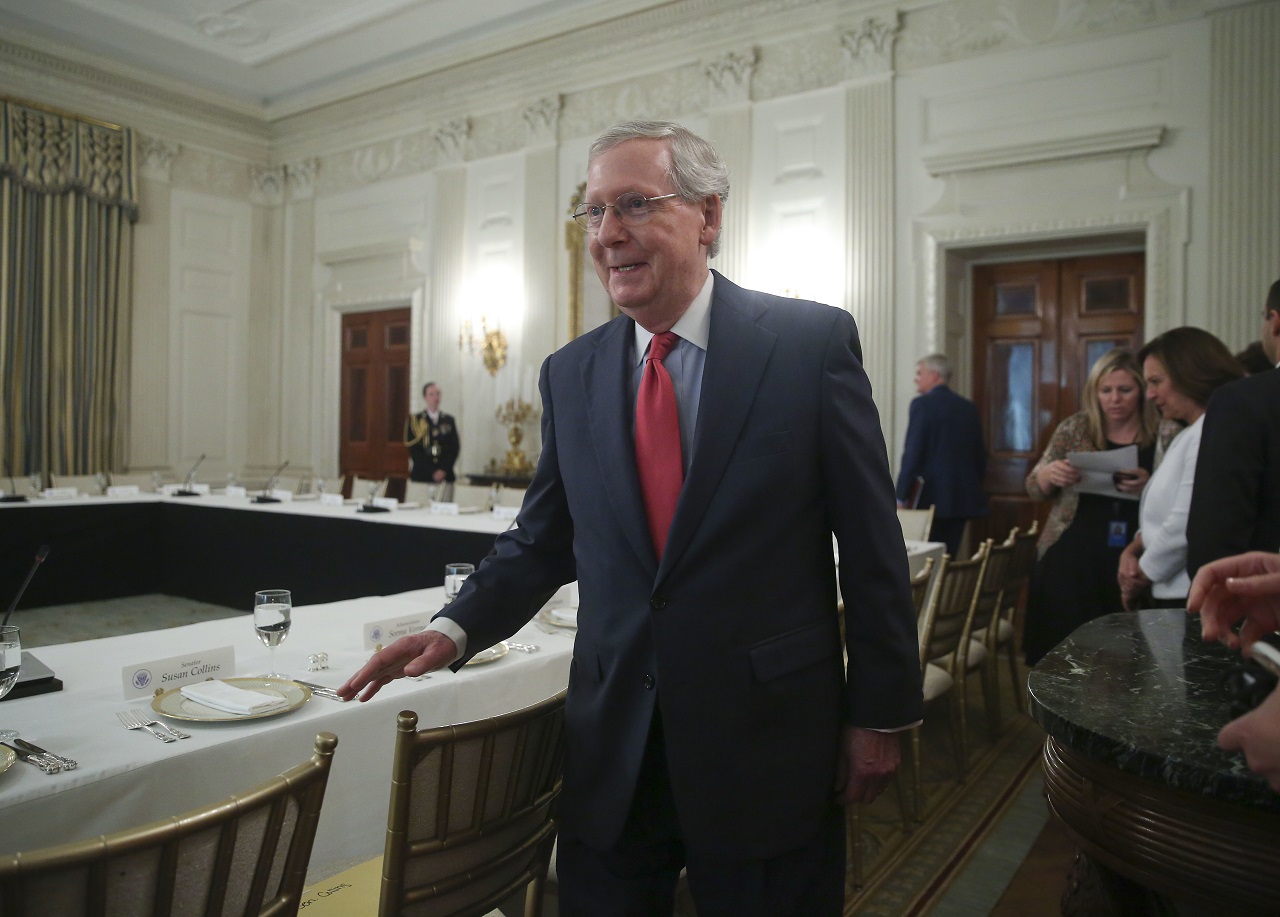 Senate Majority Leader Mitch McConnell of Ky. walks to his seat for a luncheon between GOP leadership and President Donald Trump, Wednesday, July 19, 2017, in the State Dinning Room of the White House in Washington. Americans overwhelmingly want lawmakers of both parties to negotiate on health care, with only 13 percent supporting Republican moves to repeal “Obamacare” absent a replacement, according to a new poll.

Americans overwhelmingly want lawmakers of both parties to work out health care changes, with only 13 percent supporting Republican moves to repeal "Obamacare" absent a replacement, according to a new poll.

Although a deep partisan divide endures over the 2010 Affordable Care Act, people may be less far apart on what policymakers should try next, says the Associated Press-NORC Center for Public Affairs Research survey.

In the poll, 8 in 10 said Republicans should approach Democrats with an offer to negotiate if the current GOP overhaul effort fails, rather than sticking with their own "repeal and replace" campaign of the past seven years. And nearly 9 in 10 said Democrats should take Republicans up on such an offer.

The poll was conducted as the GOP's plan floundered in the Senate during the past week.

A foundation for common ground seems to be this: Nearly everyone wants changes to the Obama law, while hardly anyone wants to see it abolished without a substitute in place.

Among Democrats, only 22 percent actually want the ACA kept just as it is; 64 percent want it kept but with changes. Among Republicans, 27 percent want immediate repeal, while 54 percent favor repealing the law when a replacement is ready.

"Since we are a nation that's founded on compromise, I don't see why we can't compromise on this," said Valcee Cox, a retired high school history teacher in Big Spring, Texas. He votes Republican, but says with his party in control of Washington, "they should act like grown-ups."

Republicans including President Donald Trump and Senate Majority Leader Mitch McConnell have recently pushed the notion of repealing as much of "Obamacare" as possible, then figuring out a replacement later. That's not what the public wants, the poll found.

"When they talk about repeal and not replacing, that scares me half to death," said Andrea Martin of Taylor, Michigan. Disabled and dealing with diabetes and other health complications, Martin is keenly sensitive to deep Medicaid cuts proposed by Republicans. That "would just totally destroy me," she said. "I'd just go downhill."

Former President Barack Obama's law extended coverage to some 20 million people, reducing the nation's uninsured rate to a historic low of about 9 percent. But it was passed without a single Republican vote and has faced entrenched opposition ever since.

The law's private insurance markets are shaky in many areas, with premiums rising and insurers exiting due to financial losses. The law's Medicaid expansion has worked more smoothly, but 19 states still refuse it, amid debates about costs and the government's role in health care.

Candidate Trump promised voters that repeal would be a slam-dunk, and that better, more affordable health care would take its place. Instead the first six months of his presidency have been consumed with fitful efforts to move GOP-only legislation. Republicans took a hit when nonpartisan government analysts concluded at least 22 million more people would be uninsured under GOP plans.

With McConnell lacking the votes to pass his overhaul in the Senate, or a straight repeal bill, the Republican campaign may be sputtering to an end.

The AP-NORC poll suggests the debate over Republican plans actually may have nudged the nation toward the left on health care.

"When confronted with millions losing coverage, Americans are more supportive of the principle that the federal government should cover people," said Robert Blendon of the Harvard T.H. Chan School of Public Health, who reviewed the AP-NORC findings.

Indeed, 59 percent said they preferred leaving "Obamacare" in place over its outright repeal.

The poll found a deep sense of unease over Republican plans.

Thirty-seven percent said they or their families would be made worse off by the GOP proposals. That's striking because the ACA covers only about 20 million people in a nation of more than 320 million.

Part of the explanation may be that Republicans also proposed major cuts to Medicaid, and that could have increased public misgivings. Sixty-two percent in the poll opposed Medicaid cuts.

Of major elements in the GOP plan tested in the poll, only the idea of allowing young adults to stay on their parents' insurance until age 26 got majority support (65 percent). That's a holdover from Obama's law.

Repealing Obama's unpopular requirement that nearly all Americans have coverage or pay a fine got the support of 44 percent, while 39 percent were opposed.

Overall, 51 percent of Americans said they were opposed to the Republican health care plan, while only 22 percent supported it. Among Republicans, not quite half were in favor, while 2 in 10 were opposed.

The AP-NORC poll of 1,019 adults was conducted July 13-17 using a sample drawn from NORC's probability-based AmeriSpeak panel, which is designed to be representative of the U.S. population. The margin of sampling error for all respondents is plus or minus 4.1 percentage points.

Trump suggests just repeal Obamacare, then try to replace it