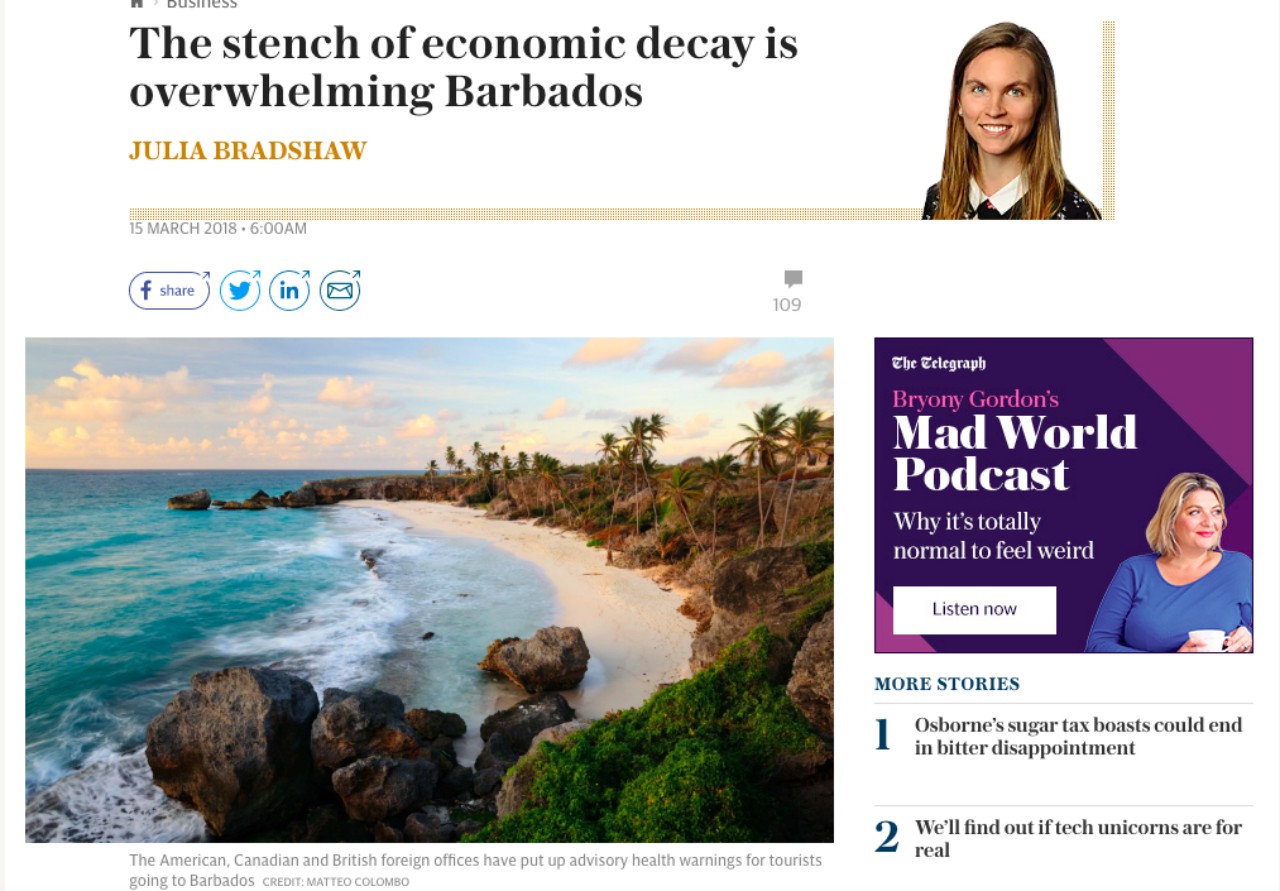 The article, ‘The stench of economic decay is overwhelming Barbados’ in London’s The Telegraph newspaper, is rubbing some readers the wrong way.

Painting Barbados in a negative and unpleasant light, days after the island was named the number one destination in the world on the 2017 Destination Satisfaction Index (DSI), the author was met with much disagreement in the comments section.

Her writing came on the heels of Barbados attaining the highest overall World score, 8.8/10, of the 144 countries included in the DSI categorization. The destination also ranked highest in the Accommodation category, and highest in the Americas region ahead of Bermuda and The Bahamas.

Yet, Robinson had nothing good to say about the island

Without registering or paying for The Telegraph, persons can read:

“Barbados stinks. It really does. A foul effluvium bubbles up from the manhole covers and rainwater drains in the streets, pours into the roads and pavements, and out on to the island’s pristine beaches 24 hours a day. Red flags along the white sands tell us it is unsafe to swim. The smell of human excrement is sometimes unbearable.

“This sewage problem is blighting the entire south coast of the island I used to call home, and is a symptom of the incompetence and perceived corruption of the current administration, which Barbadians have dubbed the “do-little government”.

“Already, local schools and post offices have been forced to close, businesses and restaurants are suffering,…”

However, she goes on to say that “many Bajans and visitors have come down with violent bouts of gastroenteritis. This tragedy is a catastrophe for a country so dependent on tourism and a national humiliation for an island that was once a model of success in the Caribbean. Worse still, it could have been avoided had the authorities undertaken required maintenance on the water and sewage system installed in 2002 under an Inter-American Bank loan.”

Last night, the Leader of the Opposition, Mia Mottley said that she could not refute the claims by Bradshaw in the editorial, but many commenters were quick to set themselves apart from her sentiments.

“Please check the facts and then issue a correction and apology

“I agree with all the other points made in the article and she is so correct to highlight the inadequacies of the Bajan Government.”

“I live here on the beautiful Island of Barbados for 5 months every year and having done for the past 35 years I know a more about our home than you do. Yes of course this Island depends on tourism and your irresponsible article could have massive repercussions on the industry and the lives of the wonderful people who live here. What are you doing trying to kill us all off ? You truly need to research your facts Julia Bradshaw. You have blown the sewerage problem up out of all proportion, this is isolated to one part of the Island on the South Coast and it’s being dealt with, it does not have any effect what so ever to the rest of the Island. You don’t even know where we are, for your information we are in the beautiful Caribbean. Please back up you story with facts, and consider the lives of the majority on this Island who are true, honest, generous and kind people.”

Related article :Bajans should be ashamed as tourist shares photo of garbage

“This article is what I deem to be irresponsible journalism at its best. It is a gross exaggeration of the country's affairs! Why is it categorized as an African continent when Barbados is an island in the Caribbean?”

“This article should not stop tourists visiting this beautiful island.

“There is a serious sewage problem on one part of the south coast road but all other areas are fine.

“I wouldn't swim in the waters by beaches in that area as sewage has to be getting into sea, Plenty of other places. Just been going on for far too long with no end in sight. Lovely new water authority offices though!

“Crime is generally drug related and confined to small areas but occasionally spills over such as at last Kadooment when 20 rounds were fired into a crowd by some mad man killing one and injuring others.

“As for politics and economics this barely touches the surface.

“Barbados is in a sad state economically and politically. Elections in June. Unlikely to see speedy improvement.”

“This journalist was irresponsible with her facts and should have pinpointed the area where the sewage problem is rather than her broad statement saying “the entire South Coast of the island”.

“The South Coast of Barbados is a large area of many miles and this unfortunate statement of hers has and will affect many hotels, restaurants and businesses who are on the South Coast but who are no where near the problem area.

“She needs to retract this statement. In fact not needs to but must.

“The rest of Barbados is perfection for visiting.”

“Julia, you have not produced any new information here and quite frankly your little (what can I call it) spiel is exactly what you attempted to write about...SEWAGE. I cannot believe a reputable paper would pay you for hot sewage. Look, you with your vast analytical skills (LMAO) found that there is corruption in Barbados. Let me update  you all the international corruption agencies have found that there is little or low corruption in Barbados and that Barbados  has the best rating regarding corruption in the Caribbean. This fact alone should inform and confirm that what you have written is pure SEWAGE to whoever reads it.

“I am of the opinion that your silly attempt to influence visitors away from visiting Barbados will fail miserably. Please be honest. How can a plant not correctly engineered or maintained not have problems after two decades of operating...??? Several countries and places have sewage problems... where are the articles about those places...??? I was recently in Orlando, Florida, and there was a sewage problem. As a mature visitor I did not get on a soap box to depreciate the wonderful holiday destination.

“Finally, I invite you to come and see the many aircraft and cruise ships that come to this GEM of an island on a daily basis. YOU WILL NOT BE ABLE TO DESTROY BRAND BARBADOS.

“Normally, I would express my encouragement of any honest effort to educate... but you have failed horribly. Please let go of your emotions and biases.”

However, some commenters said that the post will keep them away from the island for now.

Steve Russell told Thadeus Longfellow, “Rhubarb! I'll not be visiting Barbados unless it gets it's act together or is put back under competent colonial control.”

While, Simon Coulter added, “I'm sad to read this - but actually grateful as the island was on our list for another visit in the near future.  We usually stay to the south near Oistins so this is bad news.

“I've worked a little in Barbados and found my local colleagues had a vibrant community and a good lifestyle including homes we could easily envy which were not at the chattel-house end of the scale.

“I'm not convinced of all the facts of the scale, location and reasons but did not like the sound of the political scene.”