Skip to main content
Breaking News |
COVID-19: Repatriated American who resides in B'dos tests positive
Gunshot victim tried to get away but crashed
21 things parents are tired hearing in online Google classes
No National Summer Camps, but online options being cooked up
Japan floods leave up to 34 dead, many at nursing homes
Almost 10 days of zero active COVID-19 cases in Barbados
CARICOM steps into the 21st Century with virtual CARICOM Day session
Barbados makes the UK Travel Corridor Exemption List as of July 4
Empress Zingha calls on local artists to speak out through their art
Wolves' CL hopes dealt a setback with 2-0 loss to Arsenal 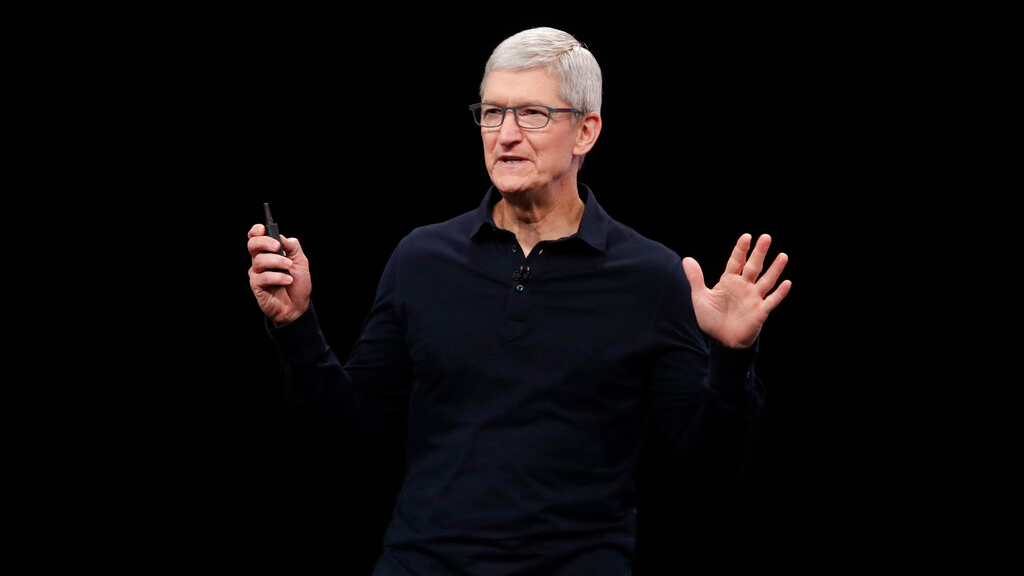 The Latest on Apple's developers conference (all times local):

New privacy tools and changes to Apple's iTunes software are among the highlights at Apple's annual developers conference.

The event Monday is Apple's chance to preview features expected this fall. They include a new "dark mode" for its new iOS 13 iPhone software. An updated Maps app has a new "Look Around" feature similar to Google's "Street View." Apple is improving portrait lighting for its camera software and will use artificial intelligence to improve photo management. It also updated its Health app for the Apple Watch to monitor safe hearing levels, track more activity trends and track women's menstrual cycles.

The company also unveiled a new Mac Pro computer starting at about $6,000.

On privacy, Apple is offering iPhone users a way to bypass Facebook's and Google's sign-in services when using new apps. Apple is introducing a competing sign-in service — and promises to be more respectful of privacy. Among other things, Apple will mask your real e-mail address when you sign in and give apps a random string instead.

And Apple is breaking up its iTunes software for Macs into three apps: Apple Music, Apple Podcasts and Apple TV. It's similar to how iTunes already works on iPhones and iPads.

Apple is breaking up its iTunes software for computers into three apps: Apple Music, Apple Podcasts and Apple TV.

The approach is similar to what Apple already offers on the iPhone and iPad. Apple debuted iTunes 16 years ago to manage digital music for the iPod, which paved the way for the iPhone.

The changes are coming with the new Mac software update, Catalina.

Apple has been beefing up digital services such as video streaming to offset eroding sales of its bedrock product, the iPhone.

Apple is also offering a way to use your iPad as a second display for your Mac. The announcements came Monday at Apple's annual developers conference.

It's for those worried about letting Facebook and Google build bigger profiles on them by tying all their activities under their Facebook and Google accounts. Instead, Apple is introducing a competing sign-in service — and promises to be more respectful of privacy. Among other things, Apple will mask your real e-mail address when you sign in and give apps a random string instead.

Apple is also offering users the ability to share location with apps just once, and not continually. And it will block apps from using Wi-Fi and Bluetooth to infer your location.

These privacy-focused features are part of the iOS 13 software update announced Monday and expected this fall.

Apple is opening its annual developers conference with another sneak peek at its upcoming Apple TV Plus video subscription.

CEO Tim Cook showed a snippet from a new show from Ron Moore, the executive producer of "Battlestar Galactica." The show, "For All Mankind," appears to be an alternative take on the U.S.-Russia space race in which a Soviet Cosmonaut is the first person to set foot on the moon.

Apple TV Plus was announced in March and is due out the fall. Pricing details haven't been released. Oprah, Jason Momoa, Big Bird, Steven Spielberg and a host of other stars have also lent themselves to original Apple shows.

Apple also announced Monday that its Apple TV streaming device will soon offer support multiple users, so that individual members in a household can have their custom list of shows and how far they have watched. In the past, all the preferences have been tied to whoever set the device up.

Apple is also announcing updates for its iPhone, Mac and other software at its event in San Jose, California.

Apple will preview upcoming changes to its phone and computer software Monday as it undergoes a major transition intended to offset eroding sales of its bedrock iPhone.

The company's software showcase is an annual rite. But Apple is currently grappling with its biggest challenge since its visionary co-founder, Steve Jobs, died nearly eight years ago.

Many of the software updates are expected to be tailored for the digital services that Apple is rolling out to lessen its iPhone dependence.

Although still popular, the iPhone is no longer reliably driving Apple's profits higher. Sales have Sales have fallen sharply for the past two quarters and there's little reason to expect a quick turnaround.

iPhone sales are falling, and Apple's app fees might be next