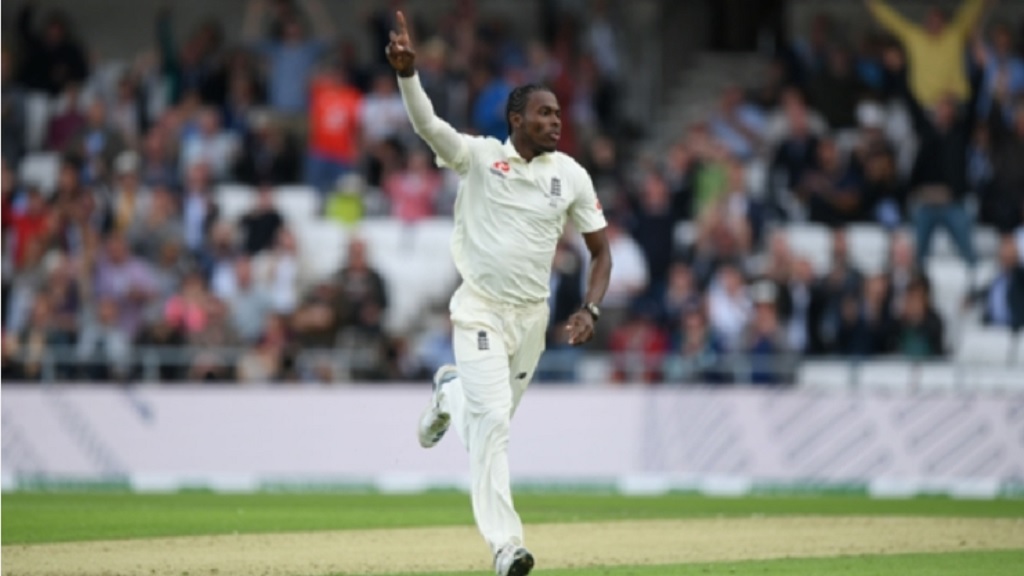 Jofra Archer took six wickets as Australia were skittled out cheaply on a rain-affected first day of the third Ashes Test at Headingley despite half-centuries from David Warner and Marnus Labuschagne.

Australia lost eight wickets for 43 runs in a dramatic final session on Thursday, collapsing to 179 all out after Joe Root put them in under grey skies following a delayed start due to dismal weather in Leeds.

Warner (61) returned to form with a battling knock and Labuschagne (74) made a second successive half-century, having frustrated England with a crucial innings when he was called in as a concussion replacement for Steve Smith at Lord's.

Labuschagne, selected with Smith ruled out, and Warner put on 111 for the third wicket before the magnificent Archer took five of eight wickets to fall after tea, giving England a great chance of levelling the Ashes series at 1-1.

Strike bowler Archer, whose rapid bouncer flattened Smith last weekend, sealed a maiden Test five-for with figures of 6-45, while Stuart Broad posted 2-32 in the 52.1 overs that were bowled on a gloomy day.

Archer struck in his second over after play began following a delay of just over an hour, snaring Marcus Harris – in for the dropped Cameron Bancroft – caught behind with a brilliant delivery.

Australia were 25-2 when Broad strangled Usman Khawaja down the leg side after an early lunch was taken due to more dismal weather.

They were back off for rain with the tourists 39-2 and England lost control after an early tea was taken due to bad light.

Opener Warner slapped Ben Stokes for four and brought up his half-century with a streaky boundary over point in the same over as England's frustration mounted.

Warner successfully reviewed when he was given out caught behind off Broad for 61 but was on his way when he nicked a sharp ball from Archer through to Jonny Bairstow.

Travis Head was cleaned up by an unplayable delivery from Broad and Matthew Wade was also on his way without scoring in unfortunate fashion, seeing the ball trickle back and hit the stumps after Archer struck him on the glove.

Labuschagne was in agony when he was hit in a painful area by Broad after reaching his half-century and Chris Woakes had captain Tim Paine leg before following a successful review.

Root held on at first slip when Archer drew an edge from James Pattinson – in for Peter Siddle – and Pat Cummins became Archer's fifth victim before Labuschagne missed a straight full toss from Stokes and was triggered lbw.

Archer fittingly finished Australia off by getting Nathan Lyon lbw with the first ball of the final over of what turned out to be very much England's day.

Archer rose to the occasion on his Test debut at Lord's and showed no signs of fatigue with another hostile display of fast bowling.

The Barbados-born quick came to the fore in a dramatic evening session, tearing through the tourists as he bowled with pace and great control.

Broad was also outstanding once again and could easily have had at least five wickets as he generated plenty of swing and movement off the seam.

WARNER STOPS THE ROT, LABUSCHAGNE A SUPER SUB FOR SMITH

Warner had not made it to double figures in his four visits to the crease at Edgbaston and Lord's, but the opener was back in business in Yorkshire.

The left-hander rode his luck, playing and missing time and again, but struck seven boundaries and ran aggressively in a battling knock.

Labuschagne came to the rescue when he replaced Smith in London with a resolute half-century and was in the runs again after earning his place in the side, batting with excellent technique and application.

Archer conjured up a couple of brilliant deliveries to dismiss Harris and Warner, but a pumped up Broad left Head shaking his head with a peach of a ball which struck the top of off stump.

- The second-highest stand after David Warner and Marnus Labuschagne's partnership was only 23 – between the latter and Tim Paine.
- Stuart Broad is one wicket away from becoming the all-time leading Test wicket-taker at Headingley.
- Labuschagne has reached 50 in eight of his last 11 first-class innings; having been in sublime form during a spell with Glamorgan.
- Travis Head's duck was the second of his Test career – the first came in his maiden innings.

Ashes 2019: England capitulate as Australia dismiss them for 67