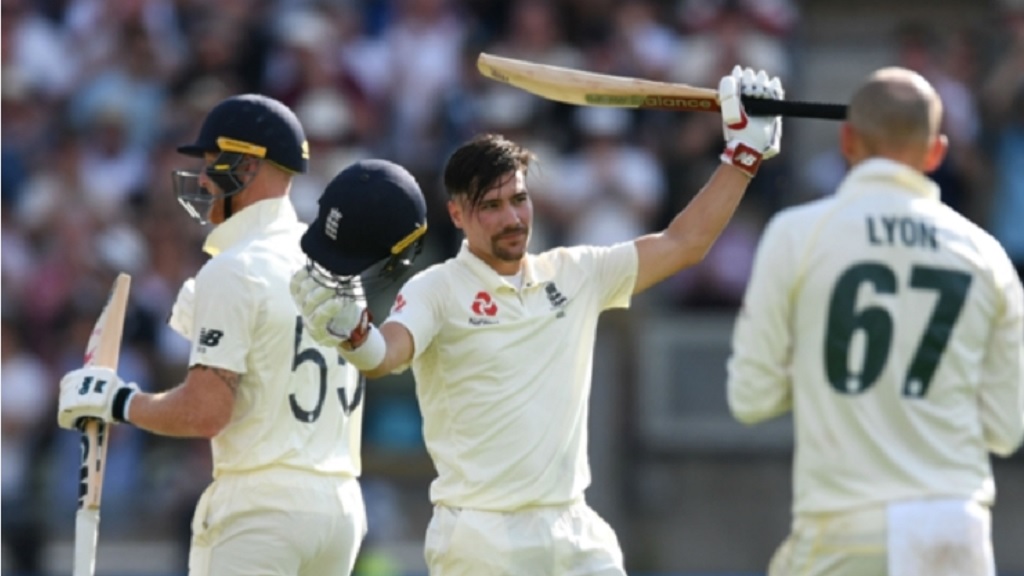 Rory Burns celebrates his hundred in the first Ashes Test against Australia.

Rory Burns scored his maiden Test hundred as England enjoyed the better of day two of the first Ashes match against Australia at Edgbaston.

Left-hander Burns averaged 22 after his first seven Test appearances and saw his place in the side come into question ahead of this series, but he broke new ground in Birmingham with a gritty unbeaten 125 leading England to 267-4 at the close, 17 runs adrift of Australia's first-innings total.

It could have been a very different day for the Surrey opener, who was fortunate on two counts not to fall lbw on 21 to Nathan Lyon, who bowled brilliantly despite failing to take a wicket.

Burns retained his composure and went on to establish a 132-run partnership with captain Joe Root (57), who was making his first appearance since returning to bat at three.

Australia's pace attack struggled until a change of ball brought about an upturn in fortunes, with Joe Denly (18) and Jos Buttler (5) falling shortly after tea.

However, the tourists were unable to oust Burns as he reached the close in the company of Ben Stokes (38 not out) to keep England on the front foot.

Steve Smith's 144 on Thursday lifted Australia from 122-8 to what appeared to be a competitive 284 all out when England experienced some early scares after resuming on 10 without loss.

After Jason Roy (10) edged James Pattinson (2-54) – making his first Test appearance since February 2016 – to Smith at second slip, Burns was let off the hook when Lyon's lbw appeal was turned down and Australia's decision not to review proved costly with ball-tracking technology showing the delivery was destined to crash into leg stump.

Pattinson was left bemused when Root overturned a caught-behind decision as replays showed the ball clipped off stump without dislodging a bail rather than hitting his bat, before the captain, who was given out lbw off Peter Siddle after lunch but again reviewed successfully due to an inside edge, and Burns made the most of their reprieves by grinding out runs.

Just as Root started to look more comfortable, he was dismissed caught-and-bowled by an instinctive catch by Siddle (1-43) on his follow through, and more nervy moments ensued for Burns.

Pattinson and Pat Cummins (1-65) were rejuvenated by a ball change that led to a significant increase in swing early in the final session and they accounted for Denly and Buttler within six overs of its introduction.

But after surpassing his previous Test best of 84, Burns faced 10 deliveries on 99 before finally getting a quick single off Lyon to reach triple figures and bask in the adulation of the delighted fans.

England's troubles at the top of the order have been well documented and Burns' failure to get past 30 in any of his six Test innings prior to the Ashes led to calls for him to be replaced.

However, the 28-year-old showed incredible staying power and the challenge now will be for him to build on it throughout the series.

While Australia's decision not to review when Lyon's lbw appeal against Burns proved the wrong one, the initial call from the umpire was incorrect too.

After a string of errors from the officials on day one, Root twice overturning their decisions on Friday showed there is still room for improvement.

Although the bails where whipped off as he scampered through for a single to get his century, Burns had no doubt he had been successful and had removed his helmet and began celebrating when the incident was sent upstairs.