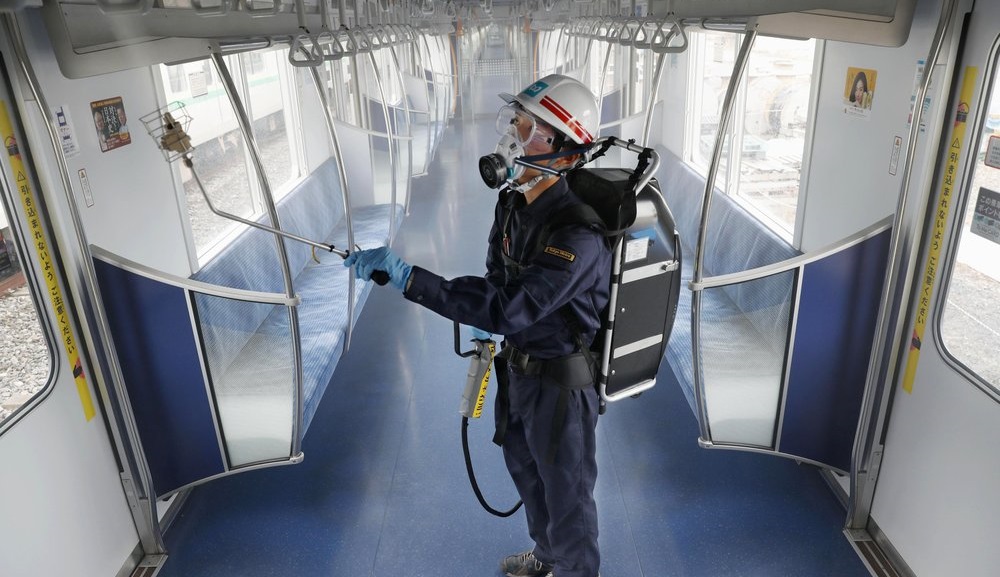 A Tokyo Metro worker, wearing goggle and protective mask, sprays chemicals to make anti-virus coating inside a passenger car at its depot Thursday, July 9, 2020, in Tokyo. The subway company plans to disinfect all 2720 cars by mid August this year, Kyodo News reported. Japan lifted a seven-week pandemic state emergency in late May, and social and business activity have since largely resumed. (Kyodo News via AP)

India reported nearly 25,000 new coronavirus infections Thursday and its transmission rate is increasing for the first time since March.

The new cases bring the total in the world's third worst-affected country to 767,296.

Research by the Institute of Mathematical Sciences in Chennai shows that India's virus reproduction rate ticked up in the first week of July to 1.19 after steadily falling from peak transmission of 1.83 in March. The rate needs to be below one for new cases to start falling.

India's infection numbers have skyrocketed since lockdown restrictions were eased. At the same time, testing has ramped up to more than 200,000 samples a day, compared to just a few hundred in March.

Health experts say the true extent of the virus's spread in India is unknown and more testing must be done, given its population of nearly 1.4 billion people.

The outbreak at Al-Taqwa College has infected 113 people. More than 2,000 students and hundreds of staff have been sent into quarantine. Australia detected 182 cases overall in the past 24 hours.

Queensland Health Minister Steven Miles said that starting Friday anyone who has been in Victoria in the previous two weeks would be banned except for Queensland residents coming home and few other exceptions. He cited the need to reserve quarantine space. 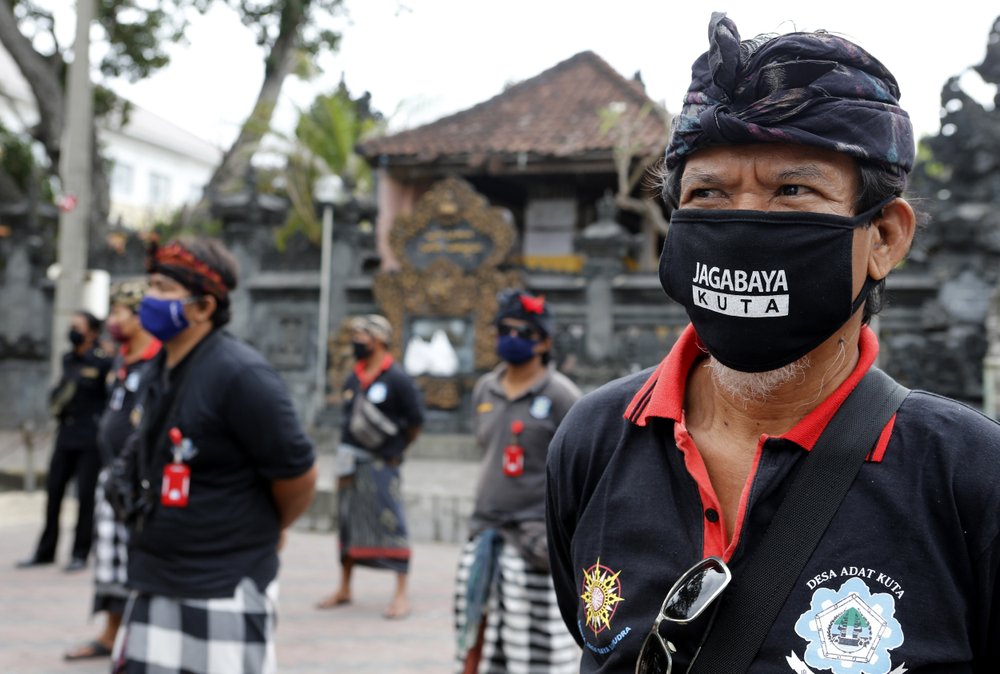 Beaches and streets on the island emptied in early April except for special patrols to ensure virus-containment protocols were observed.

Authorities restricted public activities, closed the airport and shuttered shops, restaurants and many other places.

The governor said the island will gradually reopen shuttered places to locals and stranded foreigners. Indonesians from other parts of the country will be allowed to visit starting July 31 and new foreign arrivals on September 11.

Indonesia reported 2,657 new cases on Thursday, surpassing the 2,000 mark for the first time and bringing the country's confirmed total to 70,736, including 3,417 deaths.

Most of the new cases were linked to an army dormitory at a school for prospective officers in West Java province that was locked down after 1,262 trainees and instructors tested positive. 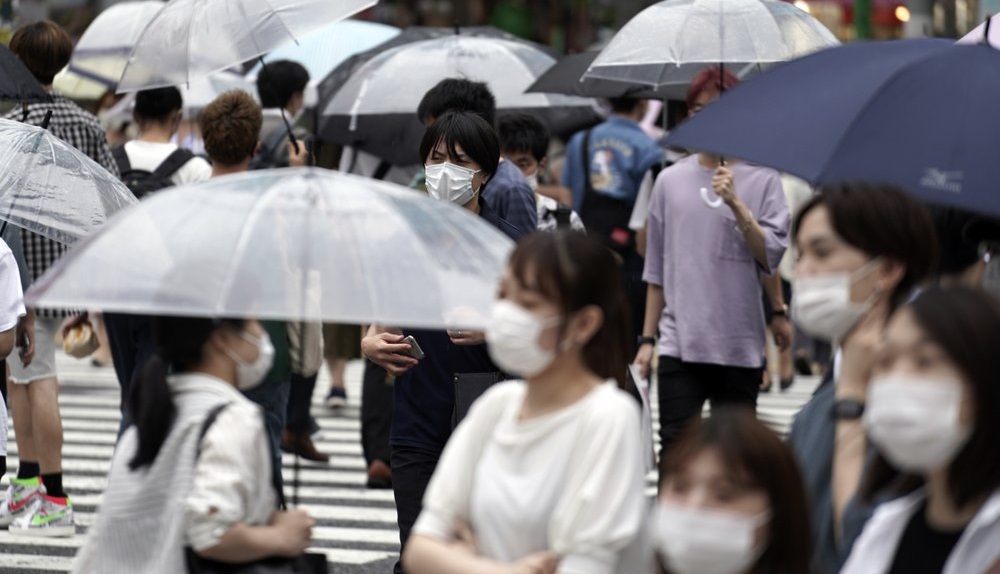 — Tokyo Governor Yuriko Koike said the record 224 new coronavirus cases reported Thursday is a "wake-up call" for the city and urged younger people, who account for most of the cases, to act responsibly so they won't infect the elderly and other vulnerable people.

Thursday's rise topped the previous record of 206 on April 17, when Japan was under a state of emergency.

Tokyo plans to further increase its testing capacity from the current 6,500 to 10,000 to quickly find and isolate patients so the capital won't have to return to a stay-at-home mode. Experts say many of the cases are linked to host and hostess clubs in Tokyo's two major nightlife districts of Shinjuku and Ikebukuro.

But recently, infections have also been spreading through households, workplaces and parties. Experts advised Tokyo to increase the number of hospital beds allocated to coronavirus patients to 3,000 from the current 1,000.

New cases are also on the rise in Tokyo's neighbouring prefectures as well as in Osaka in western Japan. The country has confirmed about 20,000 cases, while Tokyo now has more than 7,200 cases.

— South Korea has reported 50 new cases of the coronavirus as new clusters emerge across the country.

Nineteen new cases announced by South Korea's Centers for Disease Control and Prevention were from the Seoul metropolitan area, while 15 were from the southern city of Gwangju.

Twenty-two of the new cases were linked to international arrivals as COVID-19 continues to spread globally.

— Hong Kong will tighten its social-distancing measures again after reporting 42 new coronavirus cases on Thursday, sparking fears of a new wave of infections.

Of the 42 cases, 34 were locally transmitted. While most were related to known clusters, including an elderly home and several restaurants in Kowloon, the source of infection for two patients could not be traced.

From Saturday, social-distancing measures for restaurants, bars and fitness centers will be tightened for two weeks.

Restaurants will only be allowed to operate at 60 percent of their seating capacity, with a maximum of eight people per table.

Bars and clubs will only be allowed to have four people per table, and a cap of eight people will be imposed for fitness centres and karaoke bars.

— China on Thursday reported nine cases brought from outside the country and none domestically amid growing signs the virus has been essentially contained in the nation where it emerged late last year.

The near elimination of local virus transmission has allowed the reopening of most businesses and resumption of some social activities.

Sports, tourism and cultural activities are slowly starting to return, although masks are obligatory and proof of health is required at many venues.