Aubameyang scores, sent off as Arsenal draw 1-1 at Palace 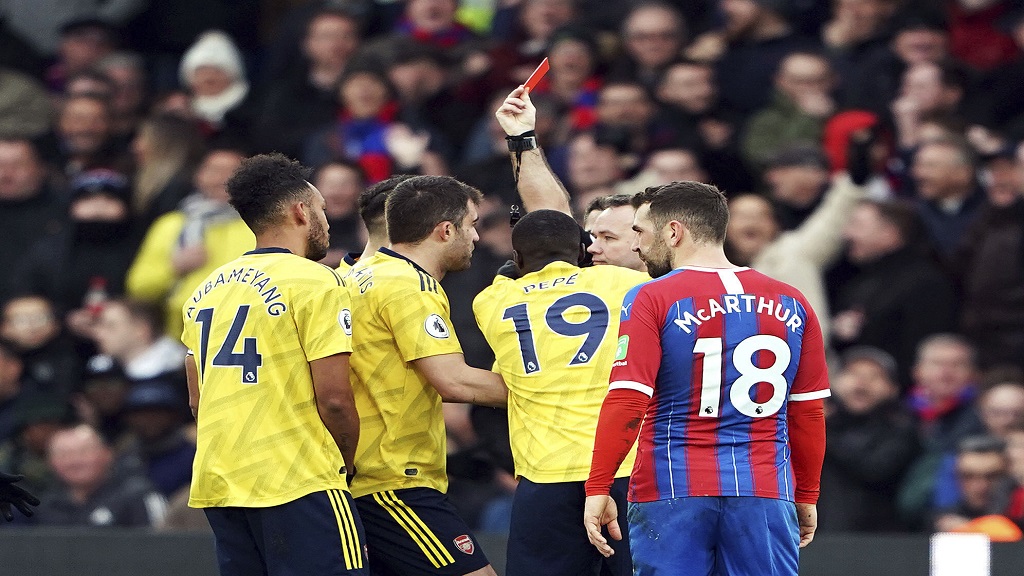 Arsenal captain Pierre-Emerick Aubameyang scored an early goal and was later given a straight red card following a review by the video assistant referee (VAR) as his team held on for a 1-1 draw at Crystal Palace in the Premier League on Saturday.

Jordan Ayew had already equalised for Palace when Aubameyang made a late challenge on Max Meyer, catching the midfielder’s left ankle with studs showing.

The referee initially brandished a yellow card but, after a lengthy check by VAR, it was upgraded to a red card in the 67th minute. As Aubameyang left the field, the tackle was shown on the big screen inside Selhurst Park and there were audible gasps from spectators.

“The VAR looked at the incident and determined that the point of contact and the intensity of the challenge endangered the safety of the opponent and recommended upgrading the yellow card to a red card for serious foul play,” the Premier League's referees' body said in a statement.

Meyer was substituted after the incident.

If it was the type of challenge seldom seen by Aubameyang, his finish was familiar in its quality. It was a brilliant team move, with David Luiz’s ball forward from center back finding Mesut Ozil, who laid it off first time to Alexandre Lacazette. The striker slid a pass into the path of Aubameyang, who was cutting in from the left, and he slotted the ball past Vicente Guaita for his 14th league goal of the season.

Palace were outplayed in the first half but came back into the match after halftime, and Ayew equalised in the 54th when his left-foot shot from the right of the goal deflected off the outstretched boot of Luiz and ricocheted into the net past despairing goalkeeper Bernd Leno.

In an exciting last 10 minutes, Palace defender James Tomkins had a header cleared off the line by Arsenal defender Sokratis, before Arsenal winger Pepe saw his angled shot crash off the post and go to the feet of Lacazette, whose close-range blast was smothered by Guaita.

“We are disappointed,” Sokratis said, “because we played much better than them and had the chances to win the game.”

Ninth-place Palace, who introduced loan signing Cenk Tosun as the substitute for Meyer following his move from Everton on Friday, stayed a point ahead of Arsenal.

In four league games under recently hired manager Mikel Arteta, Arsenal have won one, drawn two and lost one.

Arteta also scored and was sent off for Arsenal in the same match against Palace at Selhurst Park, in 2013.