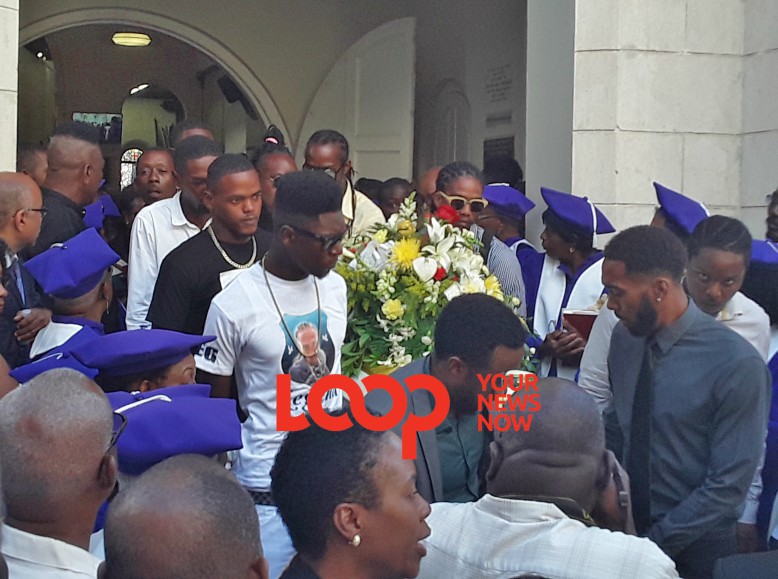 It was a solemn day for the hundreds who turned out at the St George Parish Church to bid farewell to Graeme Addison Norville, 22, who was gunned down in Rock Hall, St George, and a few weeks ago.

Known as “Short Boss" in the YouTube series “Badness”, Graeme was idolized for this ambitious, loving and kind personality although his father and mother described him as stubborn.

In her tribute, mother Deborah Norville said, she wished for no better child. She told the overcrowded church that her son was generous and from a young age he was loved by all who came into contact with him.

She said what stood out at a very young age was his stubborn nature.

“They say a child personality is formed between the ages of three and six years. When Graeme was about to turn three we got a birthday cake with the face of Bugs Bunny (his favourite character); he was so excited and the day was going well until it came time to cut the cake, I leaned over to him trying to convince him to cut the cake and share with his friends, but he remained adamant that he was not going to eat bugs bunny face, and all those little children had to go home with no cake,” she said.

His father Russell echoed similar sentiments. He said his son was different from what many people saw, noting he was a helpful, loving child and always said sorry but “only when he was wrong”.

He said his son taught him the true meaning of love and how to be strong, “He was a kind child and he always wanted to help… he also believed in family and lived his own life, no matter how short.”

He admitted that Graeme had a temper, and often got angry with those in authority. He determined in his mind that the righteous should teach by example and that anything else was hypocrisy, "he was a ‘show me’ and not a ‘tell me’ kind of child."

The young father of two did not find comfort in a hypocritical system, according to his father, and would often as a child challenge others. “If you tell him not to lie, you better not be doing it because Graeme would challenge your hypocrisy,” his father said.

"I say this as a parent facing something that no parent should ever have to face. “We need to assess ourselves. We allow a shiny ball to be dangled in front of our children inclusive of money, fame, fast food, fast lives, the unlimited phone access and the focus on excess.

We ignore the shiny ball as it grows, because we believe that we will always be able to hold our children by the leg and prevent them from reaching that ball. The reality is that some of us get tired, some of us fall asleep, and some dose off for a second and too often our children just slip through our grip,” he asserted.

In his homily Senator the Reverend John Rogers called on the congregation to use see Graeme death as a wakeup call as he cautioned those wanting to seek revenge for the life lost.

He urged them to put down their swords and their weapons, he reminded them that there is a God who sees and knows all things.

“Remember that in spite of all the injustices, unrighteousness and corruption that you may see in society, there is a God who is still in control.”

He further called on parents and adults to redouble their efforts in embracing the children in their care; not just speaking to them but also to show them there are better ways to conflict resolution.