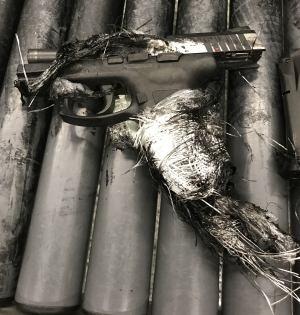 New York Port Authority Police arrested a man in his 40s at John F. Kennedy International Airport after Transportation Security Administration (TSA) officers found a gun among his carry-on items at one of the airport checkpoints.

When the TSA officers spotted the gun, they contacted the Port Authority Police who arrived at the checkpoint, confiscated the firearm and detained the man.  The accused, a resident of Barbados, was question before he was arrested on weapons charges.

The man, who TSA is yet to name, outside of criminal charges, stands to be served civil penalties of up to US$13,333 for weapons violations.

A typical first offence for carrying a handgun into a checkpoint is US$4,100.

Passengers are permitted to travel domestically with firearms in checked baggage if they are properly packaged and declared to the airline.

Agency says it will hold 'parties accountable' for JFK flood