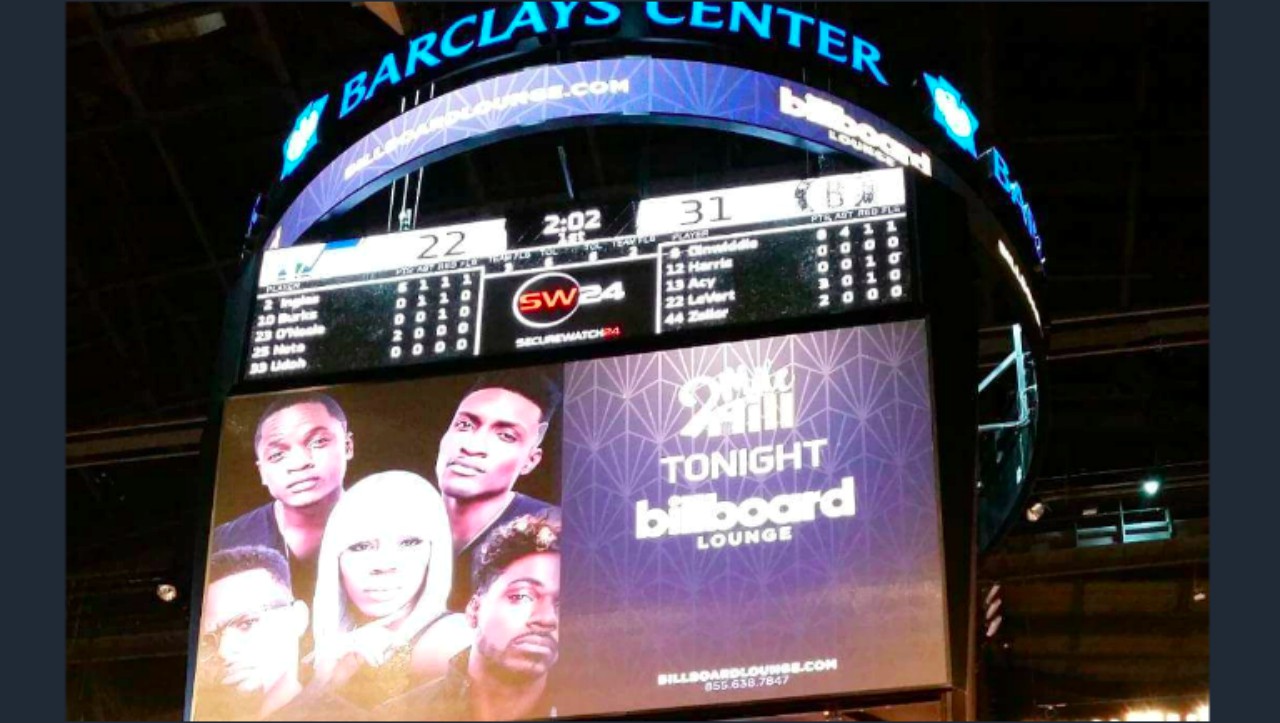 2 Mile Hill up on the Jumbotron in Barclays Center.

Mahalia Cummins of 2 Mile Hill, did not drop the baton.

Over the past three years as the Barbados Tourism Marketing Inc. (BTMI) USA explored its partnership with the Brooklyn Nets – The Barclays Center, has come to life with Barbados’ culture for Bajan night every November.

And annually a talented Barbadian has rendered the American National anthem on Bajan night.

Last night, November 17, 2017, was no different as Mahalia showed her prowess.

Following after Alison Hinds in 2015 and the ‘orange-haired songbird’ Nikita in 2016, Mahalia told Loop News: “It was a wonderful feeling to be able to take up the mantle and rep Barbados in that way.”

For just about two minutes, the faces of the talented members of 2 Mile Hill burned bright on the Jumbotrons as the announcer announced “Mahalia” and she ‘wowed’ the audience for almost a minute and 40 seconds.

It may seem like a small time-period to some, but that was one of the biggest, widest reaching stages that Mahalia has hit so far because of the appeal of basketball. Last night’s game was between the Brooklyn Nets and the Utah Jazz.

Originally posted by Raymond Callender, who was at the game according to his Facebook page. His video post received 1500 views, 75 shares and over 55 likes.

Many Barbadians commented “Proud of you”, “whoop whoop”, “Yaaassssss”, “Proud to be Bajan”, and one person said Mahalia was “fire” as she put her own spin on the anthem.

“Barbadians need to stand up and be proud of the talent that originates from our little 166 sq mile rock !!!! Mahalia brought tears to many eyes and goose pimples were in abundance with her rendition of the American national anthem to open the Brooklyn Nets vs Utah Jazz game - it is our civic duty to provide these amazing young performers with an opportunity to be seen by a wider audience because they deserve it !!!! Mahalia you did Barbados proud - and I hope you get the further success of which you are so deserving !!!!”

After the game, 2 Mile Hill had a post-game performance in the Billboard Lounge, where they got to introduce new fans to their original tracks, while rekindling flames with members of their fanbase who were already in touch with their music.

The night was not only monumental for 2 Mile Hill, Mahalia and Barbados as the Brooklyn Nets beat Utah Jazz. Final score 118 Nets, 107 Jazz.

Fun Fact: The 118 points are the most the Nets have scored against Utah since December 23, 1986 pic.twitter.com/4AZ84CLmm8