Bajans too love a snocone! 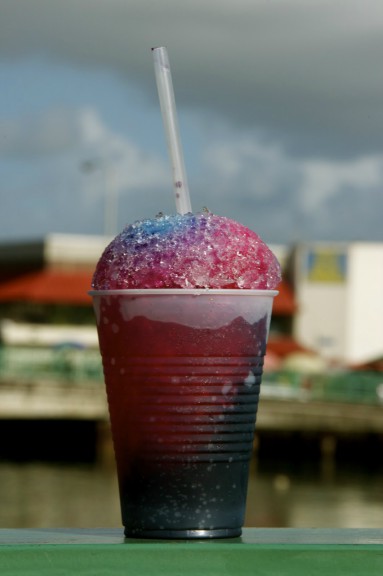 To a Bajan, snowcones is something that we can’t live widout.

There was once a time long before bicycle pedalled snowcone carts filled with shaved ice traversed various towns; when donkeys were the mode of transportation. Snowcone vendors hauled around a large slab of ice on a donkey cart wrapped in a crocus bag to keep it frozen and delivered what was referred to as travelers to excited boys and girls. The travelers were made by scrapping the ice with a rectangular shaped iced shaver and compressing it into a container and pouring on the syrup of choice.

As a young child standing at the foot of a snow cone cart was both intimidating and exhilarating-  trying to choose from the many flavours while trying to out maneuver the abundance of bees. The excitement of receiving a snowcone or snowball, as the old people used to call it, begins long before your mouth actually makes contact with the sweet syrupy goodness.

It begins from the time your ears hear that ever familiar par nar narp of the horn- from then it is almost impossible to stop yuh mouth from springing water as yuh prepare for the taste of coconut, red and blue syrup top off wid condense milk.

But hold ya horses. Nuff things got to do before a snowcone could just appear in front ya eyes. First yuh gotta get the ice, yuh gotta mix the syrup and yuh gaw prepare the cart for the trip to town.

Donkey snow cone cart days done and carts now is usually be a big box with two wheels and attach to a bicycle. Some people don’t even bother bout the cart thing and does pack everything in the back of a Suzuki van and drive through the neighbourhoods.

Nowadays most vendors is get dem ice from the Wolverine Ice Depot from down Oistins side. But back in the day The Miller Brothers ice factory on Sober’s Lane in town was the most popular place to get yuh block ice.

When it come to mekking the syrup everybody is got dem own special recipe but the general process is that yuh does gaw get bout eight pounds of sugar and a half gallon of water. Put it on the stove and let it boil fuh bout near five minutes. After that yuh let it cool and then strain it off and add the flavours to um. The usual flavors you would see most vendors wid is the coconut, red, blue and orange and some is got even tambrind and ginger flavours. It seem Bim is the only place that does use condensed milk with snow cones but nobody don’t seem to know how the practice come about. But nevertheless, sweet milk pun top a coconut snow cone is be like heaven on earth to a Bajan! Once upon a time you could walk wid one silver dollar and be sure to fill up any sized cup but dem days done. Nowadays you might gotta walk wid three silvers just to be sure, $1.50 for a small cup, $2.50 for a big cup and 25 cents for the milk. Some people is like dem milk at the top, some people at the bottom and some licrosh people is wan get top and bottom!

Yuh know yuh can’t talk bout snowcones and not mention Sister Marshall - popular for her gospel singing but even more renowned for her career as a snowcone vendor. For the last 40 years Sister Margrita Marshall was all over Bim up and down selling snowcones. She said pun a regular big hard people would come up to her and say ‘I used to buy snowcones from you when I was small’ and she would just smile when she how them grow so sweet. Some of everybody pass through she cart not to mention tourists from all over and away is come here asking to get some we Sister Marshall snowcones. A few years ago she had tek in sick and was deciding if to call the thing quits but she said the outpouring of love from the public brought her back to the streets.

“Since I gone back out a lot of people is come there, yuh know it was a lot of excitement and even now people comes in and ask for me. Cause this year when they came in for Crop Over some of the families brought dem down by me and they were so happy to see me and dey say ‘sis I ain’t eat a snowcone in so long’.”

All now yuh could still find up she up dey in Massy carpark smiling and bringing joy to people with her snowcones. She said although selling snowcones is not nuttin that would mek yuh rich she intend to stay in the business for ‘as long as she can’.

**This article was originally published in Unapologetically Bajan in December 2016**