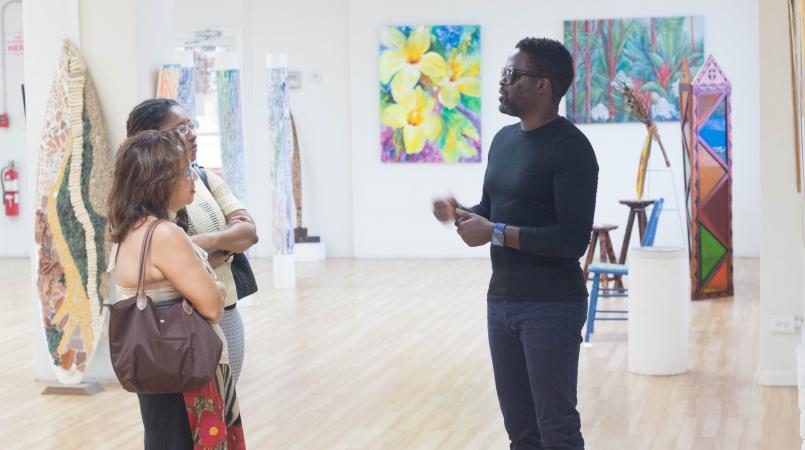 Efforts are on the way to carry Barbadian art to the rest of the world.

This was made known by Minister of Culture, Stephen Lashley, after he toured the pop-up exhibition Revo'clectic, which is running from April 5 to April 18, upstairs Massy SuperCentre Warrens.

Around 100 displays from 50 of the 115 artists who form the group Artist Alliance of Barbados - an organisation dedicated to hosting pop-up exhibitions across the island to give persons the opportunity to display their work - were on display at the gallery when the Minister visited yesterday.

When asked by Loop News about exporting Barbadian art, the Minister explained that efforts are on to take Barbadian art around the world:

"The whole idea of taking art to the wider world, in terms of missions and so on is really the business of the Cultural Industries Development Authority (CIDA), which has been formed recently.

"Only recently they were able to take a number of persons from the fashion industry and in visual art to London, where they were able to actually meet with their counterparts, see market opportunities and so on, much of that will be the order of the day."

He further noted that while marketing is a major part of such programmes, they can also provide artists with the opportunity to further develop in their area:

"In terms of the role of the Cultural Industries Development Authority, in positioning local artist in their various genres to actually go to markets and to use that as not only a fact-finding opportunity, but also to make connections and create business synergies, because that is a key area of the expansion of their business, where they can pair what they do with their counterparts in other parts of the world.

Stressing that particular attention has been paid to Europe and benefiting from the Economic Partnership Agreement (EPA), he spoke about a current initiative to ensure Barbadian products meet international standards:

"We have not done enough to take up the opportunities under EPA but we are currently into an arrangement, which has been made possible by the European Union and the Caribbean Development Bank and we're working very closely with them to see how we can take advantage of the opportunities that EPA offers, by having trained consultants working with our local designers and our visual artists to ensure that the product that we have is not only perfected, but that our local producers are made aware of the standards in terms of quality standards which are required to enter into the existing market.

"That would be one of the key areas that the Cultural Industries Authority would be pursuing in the future."

Using art to heal the wounds of cancer

10 artists battle it out in Art Wars Barbados