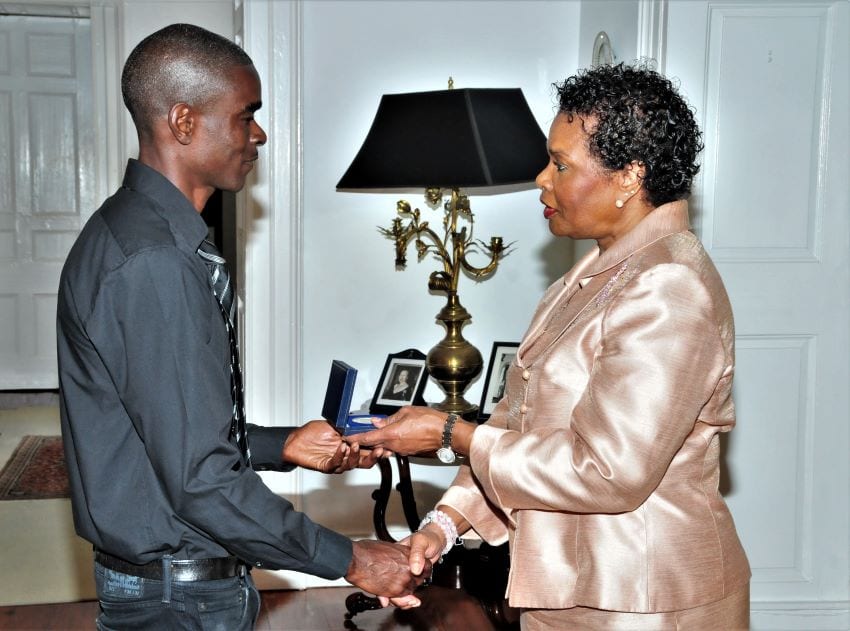 For the second time since the award’s inception in 1951, a Barbadian has been awarded the Mountbatten Medal.

National Conservation Commission (NCC) Lifeguard, Terrance Hinds, who was designated the award in 2017, was officially presented with his medal by Governor-General, Dame Sandra Mason this morning at Government House.

The 44-year-old, who has been a lifeguard for almost 21 years, remarked on receiving the Mountbatten Medal: “I feel very proud. [It’s the] best moment of my life, and I greatly appreciate it.”

On Thursday, March 9, 2017, Mr Hinds was on duty at Folkestone Marine Park, St James, when he rescued two Canadians and one British visitor in less than 30 minutes.

At the time, the beach was displaying red flags due to rough seas and strong currents, and ‘No Swimming’ signs were also erected. Despite this, several persons entered the water.

A husband and wife in their 70s were trapped by a riptide and the lifeguard swam out to rescue the male, who had become exhausted. Simultaneously, Mr Hinds guided the man’s wife back to shore by telling her where to swim.

Once the couple was safely back on the shore, he then immediately re-entered the water on a board and travelled towards the reef to rescue a female snorkeler, who had gotten into difficulty.

The NCC lifeguard also took the opportunity to urge persons who visit beaches around the island to “listen to the lifeguards when they speak and adhere to the signs that are up”.

Barbados’ first recipient of the Mountbatten Medal was Ken Mayers, who received his award in 1991 for a rescue at the Soup Bowl at Bathsheba, St. Joseph.

The Mountbatten Medal is awarded annually for the most gallant rescue or rescue attempt undertaken in the previous calendar year. The rescue must be made by the holder, or previous holder, of a lifesaving award delivered by a Royal Life Saving Society (RLSS) Member Branch and can only be awarded to a citizen from a Commonwealth Nation.

However, the rescue or rescue attempt can be performed anywhere in the world. The RLSS is a charity registered in the United Kingdom and is governed by Royal Charter.