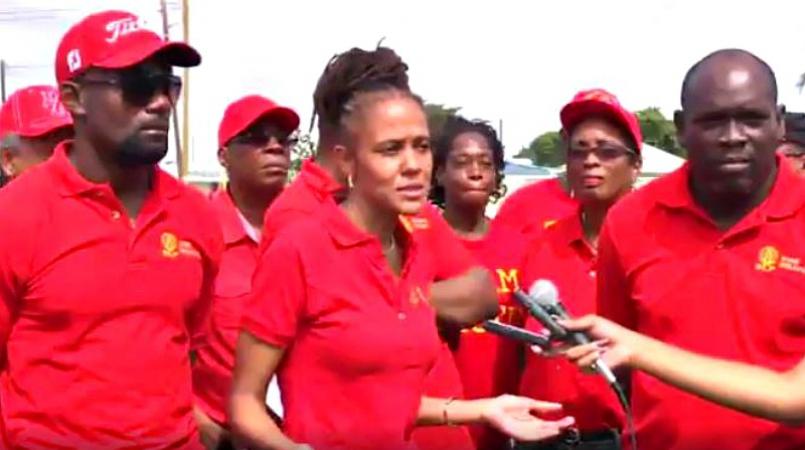 This weekend took them to St Michael South East, a constituency that MP for the area, Santia Bradshaw says the current Democratic Labour Party (DLP) administration has forgotten.

“This administration has neglected this community to the point where people are simply frustrated," she charged.

Bradshaw said that many people voted for the DLP on the basis that they would be able to own the housing units in which they live after paying rent for a number of years. However, she said this has not been the case and many have not received the promised title deeds. This, Bradshaw said, has prevented them from being able to improve their properties since they are unable to get loans from financial institutions without a conveyance.

Stressing that “we don’t want handouts; we want facilitation”, Bradshaw said the housing estates in St. Michael South East are overcrowded since four generations of families are living in units built to accommodate much smaller numbers.

“When you look at these households, a lot of them are crowded… So when you talk about people being stressed and issues of crime and why people are always outside liming… it’s because houses are overcrowded,” she surmised.

Bradshaw also highlighted other concerns such as the need for additional skips and more regular garbage pickups, as well as overflowing wells that she said are affecting homes and businesses in the area.

Her appeal for better housing solutions was echoed by Shadow Minister for Housing and MP for The City, Col. Jeffrey Bostic.

“Low-incoming housing has to be at the front of any effort that the Barbados Labour Party initiates once in government. That is something that really burns my heart… a lot of the housing estates within the St Michael corridor were built several years ago and are in serious need of an upgrade,” said Bostic.

“At a time when you don’t have enough financial resources, I believe that maintaining and improving what you have is far better than building new ones – especially when they remain uninhabited.”