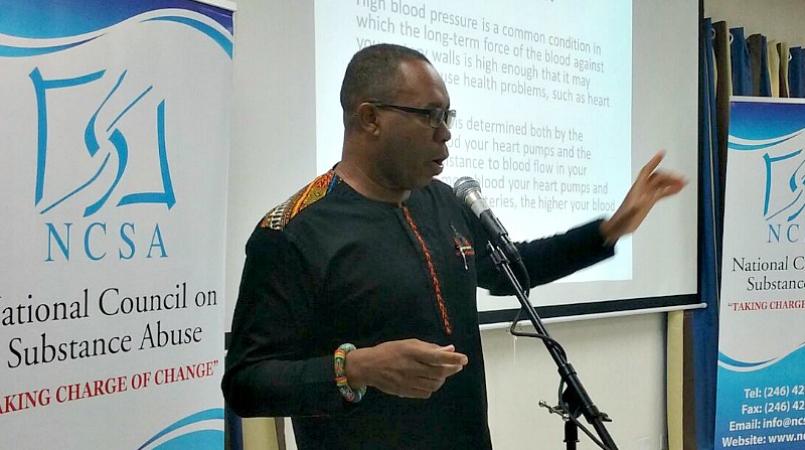 Barbados is on a “bullet train” to poor health and this must be addressed urgently.

The solution must involve some form of behaviour change.

This from Past President of the Barbados Pharmaceutical Society, Paul Gibson who says it is not good enough for a country the size of Barbados to be daily record at least one heat attack and two cases of stroke.

He said comparing the size of Barbados to other larger countries these are alarming figures that need to be reduced.

Focusing on how the health of people is deteriorating quickly, he said, “We must be careful what we eat and how much we consume and also our movement in terms of exercising. But importantly when you visit your doctor you need to have a conversation with them so they prescribe the right drug(s).”

On this occasion, he warned persons to refrain from taking a drug that is not prescribed for them even if the symptoms they may have might be the same as someone else, noting that “we are all different and what works for one person especially in the case of antibiotics might not work for another.”

And this led to him pinpointing another issue that confronts doctors and other medical professionals often. He noted is when patients do not take the full dosage as recommended. “A doctor tells you take these antibiotics for seven days, day one, day two, day three you take it and you start to feel better and you decide you should stop, that is when the bacteria starts to smile because it is time to creep back in,” he explained.

In addition, he says oftentimes pharmacists are given prescriptions to fill for a drug that the patient has taken before, “maybe prescribed by another doctor” but at times a higher or lower dosage than what they would have taken before for the same condition.

He added that what is evident in many cases is that patients at times do not remember to tell doctors what they took before and in doing so pharmacists realize that the medication while the same, might be a lesser or greater dosage; “this is where the consultation that we as pharmacists have with doctors becomes very important because many times we pick up the phone and call the doctors.”

Those in attendance were also warned of using grapefruit juice while taking Statins (cholesterol-lowering drugs). Grapefruit juice he explained affects how drugs are changed in the body for eventual elimination noting that drugs or toxins are broken down (metabolized) so that they can be eliminated from the body.

The afternoon lecture formed part of the activities to mark Drug Awareness Month, celebrated in January each year. The theme for this year’s month of activities is: Taking Charge of Change.