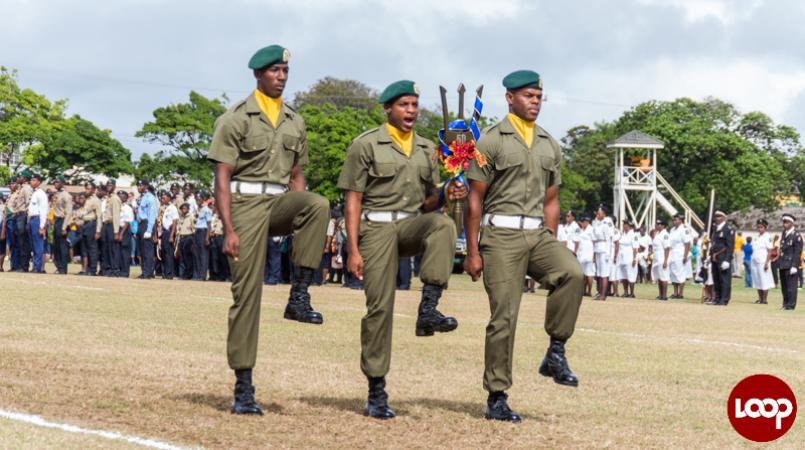 Members of the Barbados Defence Force (BDF) with the monumental trident during the parade to start the 50th celebrations. (FILE)

Barbados' annual Independence Day parade will be making a few changes this year for the 52nd anniversary.

"Cabinet chaired by our Prime Minister the Honourable Mia Mottley would've made a decision a few weeks ago that on the 30th of November - Independence Day, that we would make a few changes to the way we celebrate independence day itself and that whatever we came up with had to include greater participation by Barbadians of all walks of life whether in terms of watching, attending the parade or actively participating in the parade," Minister Bostic told the media during the conference.

Kensington Oval will now be housing this special Independence Day celebration and the government estimates approximately 11,000 attendees including 5,000 school children from across the island.

"We chose Kensington for two reasons. First and foremost given the current weather pattern, the rain is falling quite often, we felt that it would've been better to make the decision early to move because we didn't want to go to the Port, because it is quite costly to shift the parade at the last-minute.

"Secondly, given what the Prime Minister and Cabinet wanted to achieve they felt it was best to go to Kensington because of the seating capacity, to be able to accommodate 5000 school children in particular because on the Garrison they would've been standing in the sun for the most part. They felt that in order to achieve what we wanted to achieve that Kensington facilitated that process best."

Entitled "We Barbados", the procession will travel through Bridgetown onto Heroes Square then to Kensington Oval.

For persons wishing to attend there will be a park and ride service available for them from select locations.

As it relates to the actual parade, it will include 1022 persons from community groups, sporting and cultural icons, life-sized portraits of our national heroes, vendors serving traditional Barbadian items, secondary school students taking part in cultural activities and a special guest performance by The General Edwin Yearwood.

Along with that, the Guides will also salute the Prime Minister in Heroes Square before she delivers her Independence message, and address to the nation of Barbados.

To witness the parade will be free of cost, however, entry to Kensington Oval will be via ticket only and box offices will be announced soon.

Another Side: Aidan Taylor is more than an everyday Mr. Independence