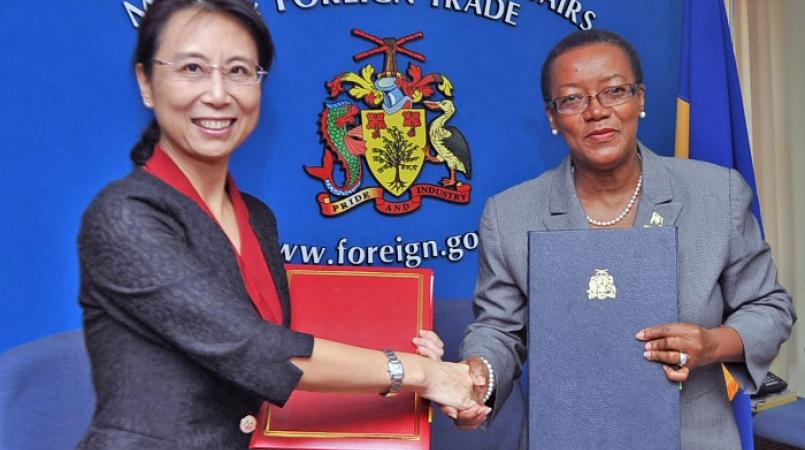 The two nations continue to deepen their relations as they head towards 40 years of diplomatic relations.

Cabinet recently approved a reciprocal Visa Waiver Agreement between the Governments of Barbados and the People’s Republic of China to include holders of ordinary passports.

This announcement was made by Minister of Foreign Affairs and Foreign Trade, Senator Maxine McClean, during a ceremony to sign the protocol for the Provision of Military Aid Gratis to Barbados, on Monday.

She added that there was also an agreement “on the establishment of Visa-Free Access to holders of passports issued by the office of the Hong Kong Special Administrative Region, the People’s Republic of China”.

Senator McClean also spoke of the excellent relations between the two countries, noting that 2017 would mark 40 years of diplomatic relations.

“In 2017 we will celebrate the 40th anniversary of the establishment of diplomatic relations between Barbados and the People’s Republic of China and of continuous support by Barbados of the One-China Policy.

"One distinct characteristic of the relations between Barbados and the People’s Republic of China, especially within recent years, is that they have remained engaging and productive,” she stated.

She noted two examples of such activities as the recent arrival of a Chinese medical team in Barbados to assist with the provision of medical care at the Queen Elizabeth Hospital, and the Sixth Round of Consultations between the Ministries of Foreign Affairs of some Caribbean countries and China’s Foreign Ministry, which took place in March.

“We also witnessed the successful completion and signing of the Treaty on Mutual Legal Assistance in Criminal Matters and the Treaty on Extradition between our two countries….  This year also marked the beginning of the rehabilitation work on the Garfield Sobers Gymnasium, which has been facilitated by grant funding provided by China….  We have also benefited from cooperation in the area of education, with scholarships, training seminars and tangible donations to assist in several Government initiatives, such as climate change mitigation,” the Minister added.

Senator McClean also pointed out that the two countries had made advancements in the area of social-cultural cooperation, including The Fish and Dragon Festival and the establishment of the Confucius Institute at the Cave Hill Campus, University of the West Indies.

Related story: Barbados gets near $6 million in military aid from China?