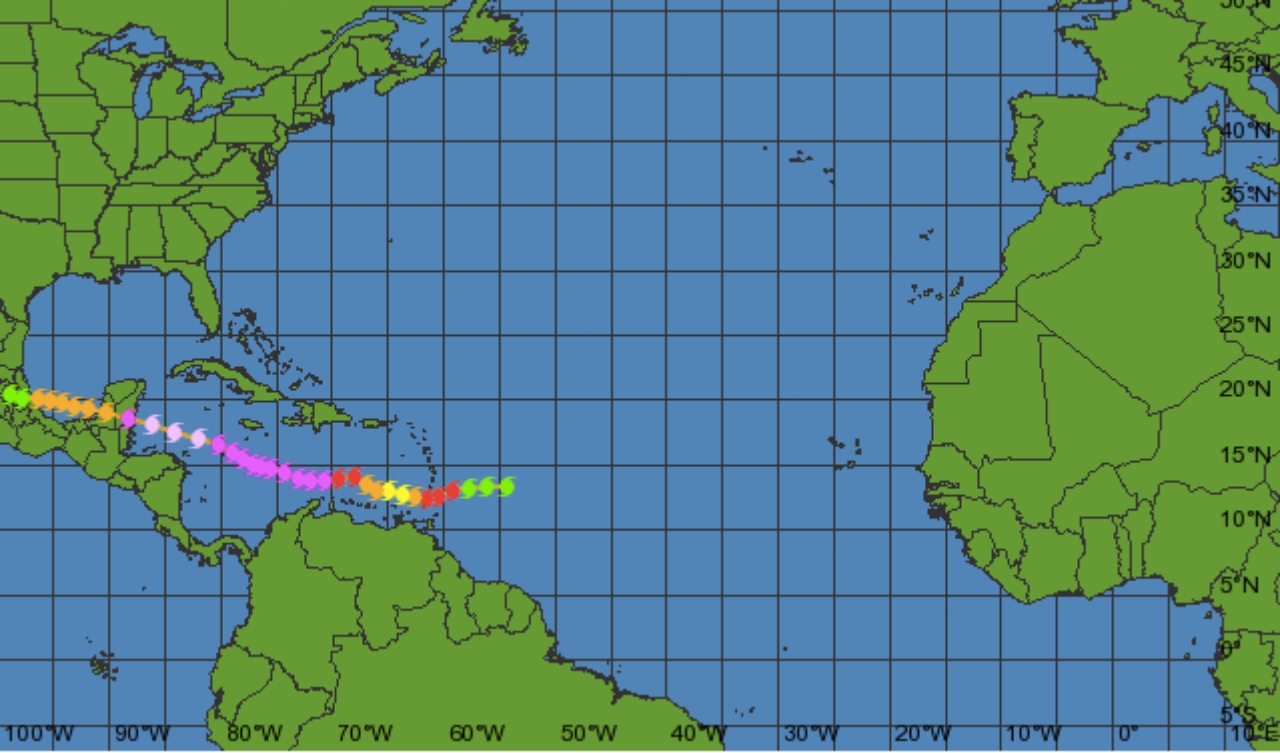 Like a bad ex-boyfriend or ex-girlfriend, Tropical Storm Kirk is back and his unwelcomed return reminds many a Barbadian of past hurricanes that had impactful flings with the island around this same time years gone by.

Here are four hurricanes that hit or brushed Barbados with such force that their presence was heard, felt and seen before, during and after.

*Sidenote: Dear men, do not harp on the point that they were all women.*

People who were alive when this storm hit still talk about this experience as one they would never like to relive.

Once, Loop spoke to a Barbadian named Janet who lives in the United States now and she said as a child she used to say to bullies that, like Hurricane Janet, she would blow down their homes. That was until her great-grandmother put a stop to her “threats”, telling her Janet was too serious of an issue to trivialize. Plus, it was not even a decade after and she was promising to wreck lives like her namesake. Kids will be kids, right?

In its developmental stages, Janet caused $7.8 million in damage to the Lesser Antilles and 189 deaths in the Grenadines and Barbados.

While Janet was in the central Caribbean Sea, a hurricane-hunting aircraft flew into the storm and was lost, with all 11 crew members believed to have perished. This remains the only such loss, which has occurred in association with an Atlantic hurricane.

It’s been 31 years since Emily ripped off roofs in Barbados.

Hurricane Emily was the only major hurricane to develop during the below-average 1987 Atlantic hurricane season.

Forming out of a tropical disturbance that moved off the west coast of Africa on September 20, the storm quickly attained hurricane status before undergoing rapid intensification. On September 22, the storm attained its peak intensity with winds of 125 mph (205 km/h) and a barometric pressure of 958 mbar.

FACT - Emily was the strongest hurricane to hit Bermuda since the 1948 season.

Since the storm was not expected to be strong when it passed Bermuda, islanders were caught off-guard by the 90 mph (150 km/h) winds. Cars and boats were affected the most, though some houses experienced severe damage during the storm's passage as well.

Hurricane Emily caused $50 million in damage to the island, though no one was killed. About 230 buildings lost their roofs and 16 people were injured due to winds gusting in excess of 112 mph (180 km/h). The local airport was shut down as a large portion of its roof was blown off during the storm.

Don’t ever expect another Hurricane Marilyn.

Hurricane Marilyn was the most powerful hurricane to strike the Virgin Islands since Hurricane Hugo of 1989. It was the 13th named storm, seventh hurricane and third major hurricane of the extremely active 1995 Atlantic hurricane season. Marilyn formed on September 12 as a tropical depression from a tropical wave that moved off the coast of Africa on September 7. After formation, the storm quickly became a tropical storm, and steadily intensified into a hurricane by the time it struck the Lesser Antilles on September 14 at Category 1 strength.

Marilyn's track took it towards the west-northwest and to the northwest, due to a weakness in the subtropical ridge. Marilyn was a Category 1 hurricane; it passed 52 miles (84 km) north of Barbados. Seventeen watches and/or warnings were issued in association with Marilyn. The first two were tropical storm watches and a tropical storm warning issued on Barbados, St. Vincent, Grenadines, St. Lucia and Grenada on September 12, 1989.

FACT – Never will there be another Hurricane Marilyn.

Due to intense destruction in the US Virgin Islands, the name Marilyn was retired in the spring of 1996, and will never again be used for an Atlantic hurricane, becoming the first Atlantic storm name starting with the letter "M" to be retired.

Over BBD $280 000 in damage and this hurricane only passed to the north of Barbados. WHEW!

Hurricane Edith brought flooding and wind damage to portions of the Greater and Lesser Antilles. The sixth tropical storm and fifth hurricane of the 1963 season, Edith developed east of the Windward Islands on September 23 from an Intertropical Convergence Zone (ITCZ) disturbance.

On September 24, 1989, when Edith intensified into a hurricane, hurricane warnings were issued from Guadeloupe to Saint Vincent, including Barbados.

Hurricane Edith was responsible for approximately $46.6 million in damage. Edith passed just north of Barbados and delivered between 7–9 inches (180–230 mm) of rain to the island. Wind speeds were between 60 and 65 mph (97 and 105 km/h) in the northern section of the island. Damage on the island totalled USD $145,000.

Throughout the island of Martinique, about 6,000 homes were demolished and 13,000 others were severely impacted. Agriculture suffered significantly, with bananas and other food crops destroyed, while sugar cane experienced significant damage. Edith left 10 fatalities and 50 people seriously injured. Damage was estimated to be $40 million.

Are you hurricane prepared?

WATTS NEW: Are you storm ready?

What is a tropical storm, and other weather terms explained

7 facts about Tropical Storm Isaac flight path towards the Caribbean