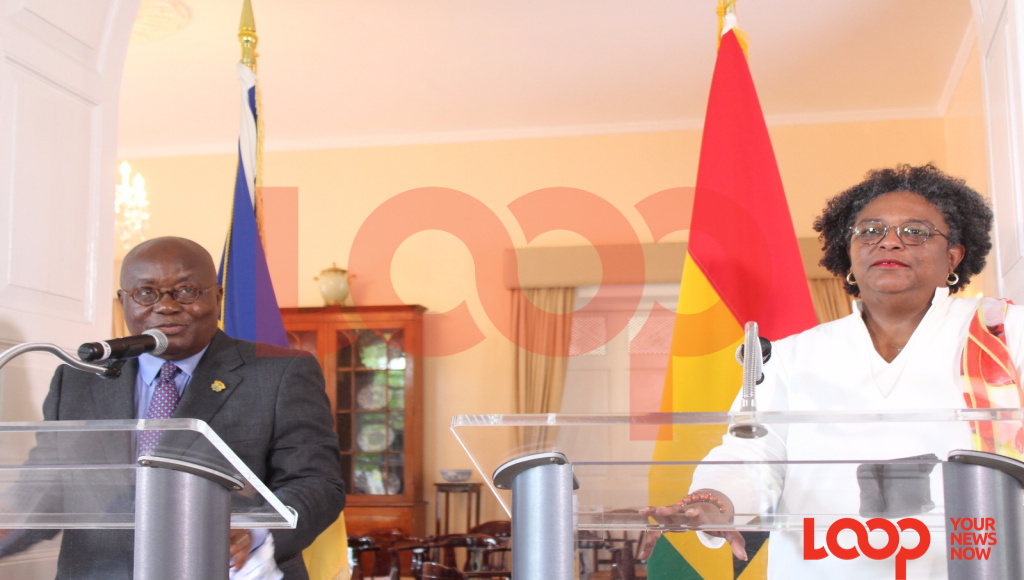 Before the end of government’s financial year, close to 400 nurses from the West African state of Ghana could be working in a number of government medical facilities, including the Queen Elizabeth Hospital (QEH).

Word of this from Prime Minister Mia Mottley and Ghana’s President Nano Akufo-Addo, following wide ranging bilateral discussions at Ilaro Court, this morning which formed part of the head of state’s official visit to Barbados, today and tomorrow.  Speaking to reporters, during a joint press briefing the Ghanaian president suggested word on a solution to the island’s nursing headache could be coming as early as within a fortnight.

“We have a surplus of nurses placing them all in our public health system is one of my headaches.  There has been a lot which has been produced and for several years that we have not been able to do anything with.

“So I’m going back, I’ll be back in Accra on Monday, the week after, the prime minister will hear from me on this matter of Nurses,” Akufo-Addo said.

Giving further details, Mottley noted that, with Barbados facing an acute nursing shortage, it was agreed that Bridgetown and Accra would pursue the exchange of nurses, with immediate effect.  In addition, she noted that there was also a initial promise to secure the nurses and provide joint education programmes going forward, all in an attempt to secure Barbados’ healthcare sector.

“We have indicated that we are searching for just under 400 nurses so it is not a small number and we really do believe that this is a wonderful opportunity of cooperation between our two countries.”

Mottley was quick to point out however, that this was not a solution to the much touted 24-hour polyclinic system, initially to be introduced at the Winston Scott Polyclinic and David Thompson on June 1, by which have so far been postponed.

She again stressed that there would be a 24-hour polyclinic, and that would happen with the current crop of nurses in the system.  She also suggested that the current shortage facing the country extended beyond the polyclinic system.

“If we had enough nurses, there would be 24-hour [system] in every polyclinic, not just Winston Scott that right now by the way [opens] 8 in the morning to 10 at night.  We look forward to the amplification of nursing across the board with respect to or entire health sector.”

Ghana beckons the Caribbean with Year of Return festivities