A teenage girl from Barbados and student of The St. Michael School has squashed the competition to show why her surname is 'Best'.

Meagan Best has ended 2017 on a high note after capturing the Girls’ Under 17 Championship title in the 2017 US Junior Squash Open held at the Payne Whitney Gymnasium, Yale University, New Haven, Connecticut from December 16-19, 2017. The tournament reported a record 930 players from 41 countries competing across five age divisions. 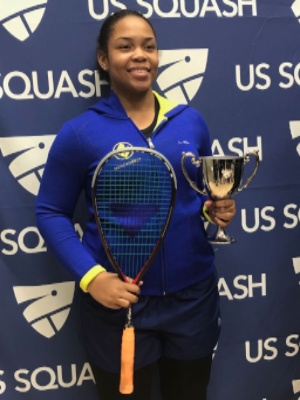 Prior to her successful finish, in her round 16 match Meagan took revenge on Maria Paula Moya Lopez of Ecuador who defeated her at the Canadian Junior Open held earlier where she finished second behind Lopez in the Girls’ under 17 Canadian final. Best returned with great vengeance to prove that she was indeed the best by defeating Lopez in 3 games; 11-5, 11-6, 11-9.

In the Canadian junior open, Chelsie Samuel made it to the Consolation quarter finals of the girls under 15 division gaining a 9/12th finish of 30 competitors while Sumairaa Suleman finished 13/16th in the same division. In the boys under 13, Alex Stewart finished 13/16 while Aidan Parris finished 17/24 of 38 competitors.

The other Barbadian competitors in the girls under 17 division in Canada, were sisters Jada and Jodi Smith-Padmore whose finishing positions were not as they had hoped for 26th and 33rdrespectively of 39 competitors.  Jada Smith-Padmore was however successful in defeating the Caribbean #2 GU17 seed Jade Pitcairn of Cayman Islands during her Consolation round matches.

A summary of the finishing positions of the Barbadian juniors in the US Junior Open Championships is as follows: