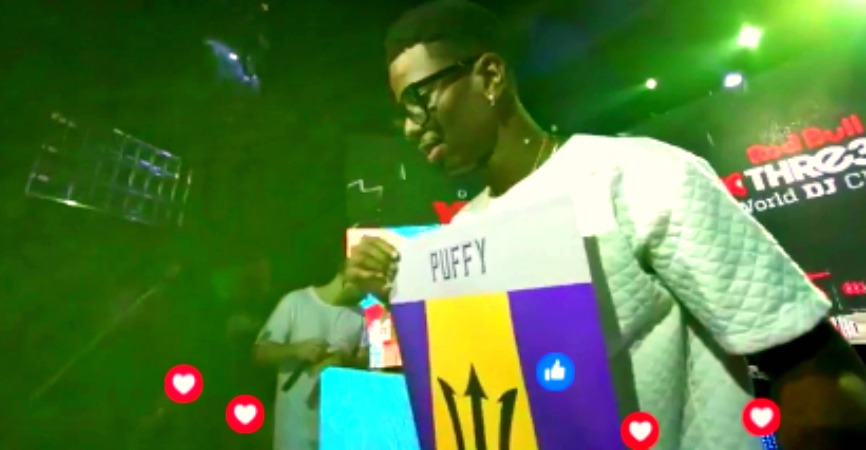 Andre 'DJ Puffy' Parris is in the #RB3Style World Finals.

Today is a historic occasion because Puffy is the first Barbadian to qualify and win his round to advance and represent Barbados and the Caribbean region at the RedBull #Thre3style World Finals.

He was announced the winner of the Day 2 Qualifier moments ago in Santiago, Chile.

At 1:57 am the six disc jocks who competed in this round of qualifiers were called back to the stage and then DJ Flip Out and DJ Byte announced the winner.

After the announcement, DJ Byte asked Puffy, “How does it feel?”

Puffy said, “This is monumental” but not just for himself and Barbados but the entire region.

DJ Byte also asked, “Are you ready for the World Finals?” To which a happy Puffy said, “Let’s do it!”

Puffy competed against Dj Stresh of France, Dj A of Brasil, Dj Ches of Spain, Dj Cross of Belgium and Dj Delta from Italy.

Puffy proudly held up the Barbados flags and cameras snapped his photo.

Immediately after the Bajan's set, DJ City also tweeted, “Puffy ends his set to a standing ovation and I think we have the guy to beat #3style”

Once the winner was announced, Serato also tweeted, “Congratulations to @DEEJAYPUFFY from Barbados for winning round 2 of the #3style world finals!”

Puffy will hit the World Finals stage on Saturday, December 17, 2016.